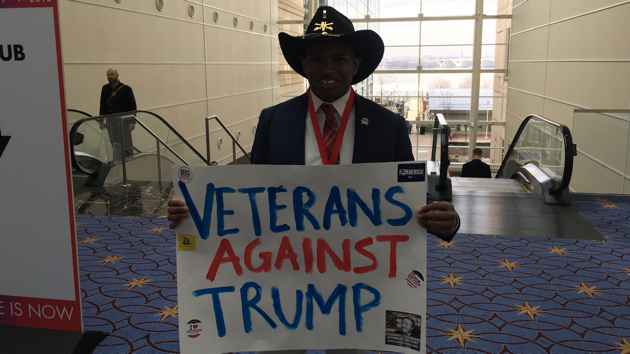 Most of the attendees of this year’s Conservative Political Action Conference aren’t too worried about Donald Trump’s divisive views on race, as my colleague Pema Levy noted earlier today. But one conference-goer is staging a one-man protest against Trump for undoing the Republican Party’s progress on inclusiveness with his attacks on immigrants and hesitance to distance himself from a former leader of the Ku Klux Klan.

Brian Hawkins stood outside the press check-in booth on Thursday with a homemade sign proclaiming “Veterans Against Trump.” Hawkins is no liberal—he moved to Virginia to work in conservative policy after finishing his Army service last year, and his sign bore stickers declaring “Big Government Sucks” and “I Heart Capitalism”—but he is fully onboard the anyone-but-Trump train, which picked up an adamant Mitt Romney in Utah on Thursday. “As long as Donald Trump continues to speak a message of divisiveness and hatred of others,” Hawkins told me, “he’s not consistent with limited government, free market, and individual liberty principles of conservatism.”

Hawkins is African American and is particularly upset about the way Trump has helped foster the image that that Republican Party relies on racism to appeal to voters. “As a black Republican, I spend my entire adult life defending the Republican Party against charges of racism,” Hawkins said. “And I’m like, ‘Noooo, it doesn’t exist, maybe there’s a few idiots out there but they don’t represent conservative values.’ And then this happens. Completely nativist and cynical viewpoints. I don’t believe that a lot of these voters are racist, but I’m not sure what the appeal is to Trump. But whatever it is, we need to come to our senses, because this man could be president.”

The CPAC crowd has generally been open—or at least outwardly friendly—to his message, Hawkins said. “With this crowd, you get a lot more of the ideological conservatives, who understand that Trump does not represent our values,” he said. Hawkins is now a Rubio supporter after his preferred candidate, Rand Paul, dropped out. But he’s mainly concerned with making sure Trump doesn’t become the nominee.

“I can’t believe that in 2016 that the legitimacy of the KKK is part of our political discussion,” he said. “I thought we had litigated that conversation a generation ago, but here we are discussing it again.”

Hawkins continued, “For me, that’s a lot of the large harm of Trump: Are we going to start having these conversations again? Is the national debate going to be whether or not we should ban Muslims immigrating here? That’s something I don’t want to be a part of. That’s something I don’t want the Republican Party to be a part of.”