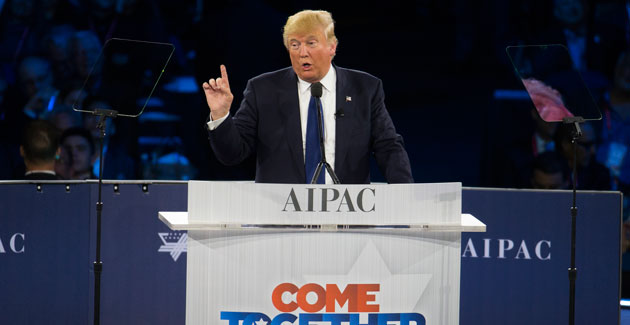 Donald Trump’s speech at the American Israel Public Affairs Committee’s annual policy conference on Monday foreboded controversy. His stances on minority rights and his seemingly ambivalent comments about Israel prompted suspicions and threats of a large boycott. But the speech turned out to be a lovefest as Trump toed the conference’s pro-Israel line and the crowd rewarded him in spades for it.

“I am a lifelong supporter and true friend of Israel,” he told the crowd, earning the first of many bouts of applause. “I am a newcomer to politics but not to backing the Jewish state.”

Many attendees had pledged to walk out of Trump’s speech to protest his comments against Muslims, immigrants, and other groups throughout the campaign. “Mr. Trump embodies senseless hatred, because what we’ve seen throughout this campaign is that whoever isn’t like him, he attacks: women, immigrants, the disabled, the press,” Rabbi David Paskin, one of the leaders of a protest group called Come Together Against the Hate, told the Daily Beast. But a large-scale walkout never materialized. While a small group of people left the crowded floor of Washington’s Verizon Center, Trump spoke in front of a packed house that gave him warm and frequent ovations.

For his part, Trump stuck closely to the standard AIPAC script. The conference is usually a venue for politicians from both parties to praise Israel lavishly, reaffirm America’s undying political and financial support for the country, bash Palestinian leadership, and talk about their own lengthy love affairs with the Jewish state. Trump threw red meat to the crowd on all those fronts and spent a lengthy chunk of his speech attacking Iran and the nuclear accord it signed with the United States. “My No. 1 priority is to dismantle the disastrous deal with Iran,” he said. “This deal is a catastrophe for America, for Israel, and for the whole of the Middle East.”

Trump also got huge applause for cheering the end of President Barack Obama’s time in office. “He may be the worst thing to ever happen to Israel, believe me,” he said.

The speech was dramatically different from Trump’s previous comments on Israel. Despite calling himself “very pro-Israel,” the GOP front-runner has staked out positions rarely heard from mainstream American politicians, especially Republicans. He said during a debate earlier this month that the United States should be “neutral” in any negotiations between Israel and the Palestinians, and he told reporters just hours before his speech that Israel should start paying for some of the billions of dollars in foreign aid America gives it each year. That stance put him at odds with decades of US policy and the rest of the 2016 field, but it’s one he shared with hundreds of pro-Palestinian demonstrators who gathered outside the conference demanding a stop to aid to Israel.

Those comments allowed Clinton to attack Trump as a danger to Israeli security during her own speech earlier in the day. “We need steady hands, not a president who says he’s neutral on Monday, pro-Israel on Tuesday, and who-knows-what on Wednesday because ‘everything’s negotiable,'” she said on Monday morning. But by the end of Trump’s unusually focused address—in contrast to his rambling campaign events, he used a teleprompter and stayed firmly on his pro-Israel message—the crowd cheered the GOP front-runner’s own attack on Clinton, whom he called a “total disaster” on Israel.