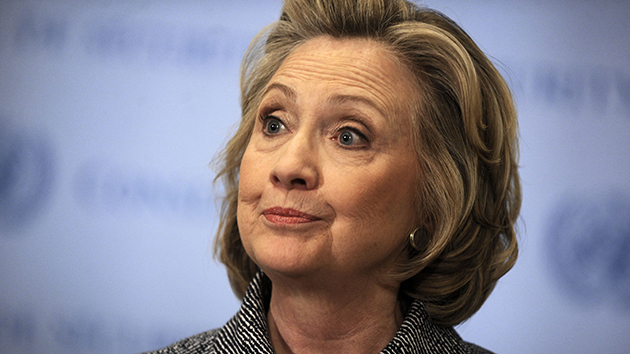 Update: March 29: The Washington Post has corrected its story to say that “fewer than 50” FBI personnel are involved in the Hillary Clinton case, not 147, as the story had originally claimed.

During a Democratic debate in October, Vermont Sen. Bernie Sanders said the American people were “sick and tired of hearing about [Hillary Clinton’s] damn emails.” That did a lot to diffuse a story that had plagued the former secretary of state throughout the summer. But the ongoing FBI investigation into her handling of classified information and the use of her private email server located in the basement of her New York residence never disappeared, even if it has receded into the background. This weekend, the Washington Post and the Los Angeles Times each published stories highlighting the latest developments in the case.

The stories demonstrate that the allegations that began nearly a year ago continue to present a serious problem for the Democratic front-runner. As the Washington Post explains, “From the earliest days, Clinton aides and senior officials focused intently on accommodating the secretary’s desire to use her private email account, documents and interviews show…Throughout, they paid insufficient attention to laws and regulations governing the handling of classified material and the preservation of government records, interviews and documents show. They also neglected repeated warnings about the security of the BlackBerry while Clinton and her closest aides took obvious security risks in using the basement server.”

Here are some key takeaways from these reports:

Clinton’s closes aides will soon be asked to meet with FBI investigators: According to the LA Times, a federal prosecutor has contacted the attorneys for Clinton aides to try to set up interviews. The story didn’t specify which lawyers had been contacted, but it did note that the attorneys for longtime aides Huma Abedin, Cheryl Mills, Jake Sullivan, and Philippe Reines did not respond or declined to comment when contacted by reporters. Federal prosecutors have already granted immunity to Bryan Pagliano—the Clinton aide who set up the private email server and maintained it—after Pagliano told a congressional panel in September that he would invoke his Fifth Amendment right against self-incrimination. According to the LA Times, prosecutors will try to set up a meeting with Clinton as well. Brian Fallon, a spokesman for the Clinton campaign, said Clinton is ready to work with the investigators and has offered to meet with them since last August.

The FBI has devoted extensive resources to this investigation: The Post story, citing a single unnamed lawmaker who was supposedly briefed on the FBI probe, says 147 FBI agents have “been deployed” to help work the case (although it’s unclear if that means 147 have worked the case full time or at one time or another). Yet since the story was first published that number has been challenged, with Politico quoting a source who claimed the number was “greatly exaggerated.” “The FBI has accelerated the investigation because officials want to avoid the possibility of announcing any action too close to the election,” the Post reports. On March 29, the Post added a correction to its story noting that two “U.S. law enforcement officials” told the paper after publication that “fewer than 50” FBI personnel are involved in the case, not 147 agents.

Clinton was warned about her BlackBerry phone by government security officials and continued to use it:  One of the key issues in this saga is that Clinton and her aides didn’t want her to have to give up her BlackBerry because, “as a political heavyweight and chief of the nation’s diplomatic corps, she needed to manage a torrent of email to stay connected to colleagues, friends and supporters,” writes the Post. “She hated having to put her BlackBerry into a lockbox before going into her own office,” which was in a secure area of the State Department known as “Mahogany Row.”

Clinton’s staff and the State Department’s security officials tried to work out a solution, but the security officials weren’t convinced they could provide her a BlackBerry that she could use in her office securely. According to the Post, Clinton never had a government-issued BlackBerry, personal computer, or email account. The story describes how “the State Department security officials were distressed about the possibility that Clinton’s BlackBerry could be compromised and used for eavesdropping,” and these officials wrote a memo outlining the range of risks, including the likelihood that Clinton’s use of her phone would lead other employees to do the same.

That worry triggered a memo from Assistant Secretary for Diplomatic Security Eric Boswell, “with the subject line ‘Use of Blackberries in Mahogany Row.'” Boswell wrote, “Our review reaffirms our belief that the vulnerabilities and risks associated with the use of Blackberries in the Mahogany Row [redacted] considerably outweigh the convenience their use can add” because these devices are “highly vulnerable in any setting to remotely and covertly monitoring conversations, retrieving e-mails, and exploiting calendars.” According to the Post, nine days after Boswell’s memo, Clinton wrote to him saying she understood the importance of what he was describing, especially “the sentence that indicates (Diplomatic Security) have intelligence concerning this vulnerability during her recent trip to Asia.”

Clinton’s server might have been operating for at least two months without standard encryption: Neither story published this weekend reports that Clinton’s email server was hacked. The Post does note that for two months the server operated without basic internet encryption, at least according to an analysis performed by an outside cybersecurity firm. (The server might have had other encryption measures employed). Emails and other data passed through the server in plain text, which means they could have been read by anyone who intercepted them. Additionally, the server included features that “made it vulnerable to talented hackers, including a software program that enabled users to log on directly from the World Wide Web,” according to the Post.

The Clinton campaign told the Post that the security of the server “was taken seriously from the onset” and that “robust protections” were in place.

The private server was also controversial because Clinton and her lawyers tried to “wipe” it before turning it over to the FBI, forcing the agency to employ forensic techniques to retrieve the data. The LA Times writes that the FBI has recovered “most, if not all” of the emails that Clinton and her lawyers deleted from the server before turning it over to the FBI in August.

The chances of criminal charges are slim: In order to bring any criminal cases, prosecutors would have to prove that Clinton and her aides knowingly mishandled classified information and shared it with people who weren’t cleared to see it, “a high hurdle in the Clinton case,” according to the Post. Comparisons have been made to the cases against Gen. David Petraeus—who knowingly shared classified information with his mistress and then lied to FBI investigators about it—and the late Sandy Berger, a national security adviser for President Bill Clinton who was caught trying to smuggle classified documents from the National Archives in his pants.

The Clinton email controversy is not as serious as the Petraeus case, according to the LA Times, nor as blatant as the Berger case. “Those cases are just so different from what Clinton is accused of doing,” Stephen Vladeck, a law professor at American University, told the LA Times. “And the Justice Department lawyers know it.”