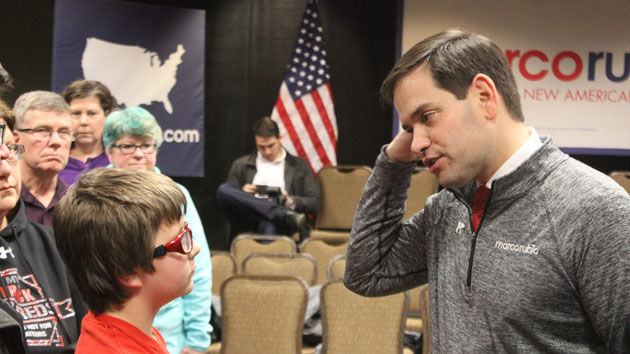 On Friday night, Donald Trump’s three remaining Republican opponents seemed to finally realize that they can’t ignore the sometimes violent chaos of the front-runner’s campaign rallies. On Saturday morning in Largo, Florida, Sen. Marco Rubio launched a new line of attack on that issue—while going after the protesters too.

On one of the final days of early voting*, and four days before polls close in the critical winner-take-all state, the Florida senator ripped into Trump as a “dangerous” “Twitter troll” who was promoting a culture of violence and potentially damaging the Republican party’s reputation for a generation. It was the toughest critique of the campaign from Rubio—but he delivered it in a way that co-opted Trump’s own attacks on those who disagree with him.

“Last night in Chicago we saw images that make America look like a third-world country,” Rubio told the crowd, referring to the protests and scuffles that resulted in the cancellation of Trump’s scheduled rally. “I am by no means telling you that the people that showed up at that rally to disrupt it are blameless—they are clearly professional agitators, most of them.” The protesters, he argued, showed up with the intent “of disrupting an event for a speaker they don’t agree with,” as part of a “a developing trend among the American left that if we don’t like what you’re talking about, we’re gonna disrupt your event, we’re gonna blow up your event. And they’ve done it at college campuses all across America. So I am by no means saying that they are blameless. They were acting like thugs last night, too many of them.”

Then he turned his fire on Trump. “The job of a true leader is not to say ‘I know you are in pain so what I am going to do is I am going to use your pain you make you even more painful, more angry, so that you vote for me instead of someone else,’ because when you do that there are consequences,” he said. He continued:

There are consequences to [Trump’s rhetoric] and they’re playing out before our very eyes. What I saw last night but in the days before—put aside last night. We have a major presidential candidate that basically encourages people in the crowd to beat up on people that protest against him. We don’t have to boo, I’m just telling you that’s what happening. That’s what’s happening. And don’t tell me that he’s not, I don’t want anyone to say that he’s not, because he is. The other day a guy sucker-punched a guy at one of his events. Look, I have protesters, they are obnoxious. Some are paid to be there. Some are just people speaking their minds and they have the right to do it. But never in my wildest dreams have I ever thought that it would be a good idea for someone to punch the guy or gal in the face. Never in my wildest dreams did I ever think that I would say punch them in the face and I will pay your legal fees. And it’s gotten worse than that. After he punched him in the face, the gentleman was arrested. I shouldn’t say gentleman—the guy was arrested. And as soon as he was released, the guy said, next time we should kill him. And no condemnation. Guys, there are consequences to this.

A few minutes later, he offered an even more ominous warning about Trump, invoking past moments “in human history.” It’s easy to “see peoples’ anger and frustration and to prey upon them,” Rubio said.

Rubio didn’t specify which historical leaders Trump reminded him of. But at one point in his riff, a supporter shouted out, “He reminds me of [Hugo] Chavez!”

The speech marked a major shift in Rubio’s campaign, which at times has veered toward self-deprecating stand-up comedy, and in recent weeks, personal jabs at Trump’s appearance. (In Largo, he again expressed regret at past comments about Trump.) It was serious, and it was focused. Many of the attendees told me they’d ruled out voting for Trump in November and would stay home if he were the nominee. John Proni, an accountant from Largo, told me a Hispanic girl in his daughters’ grade-school class had been bullied by kids who told her she’ll be deported when Trump is president. “He is everything I teach my kids not to be,” Proni said. “I was aghast at what I saw,” he said of the Chicago rally. “That’s not making America great again, that’s making America racist again.” When I asked another supporter, Bob Davis, about Trump, he gave me a reading list. “Sinclair Lewis, It Can’t Happen Here,” about a fictional fascist presidential candidate. “It Can’t Happen Here is almost Trump’s campaign platform.”

But Rubio never went as far as his supporters in pledging to stay home—even as he told reporters before he took the stage that “it’s getting harder every day” to think of supporting Trump in November. That, in a nutshell, was what he left his audience with in his speech. Trump was a demagogue and a con man—but the “left” might still be worse.