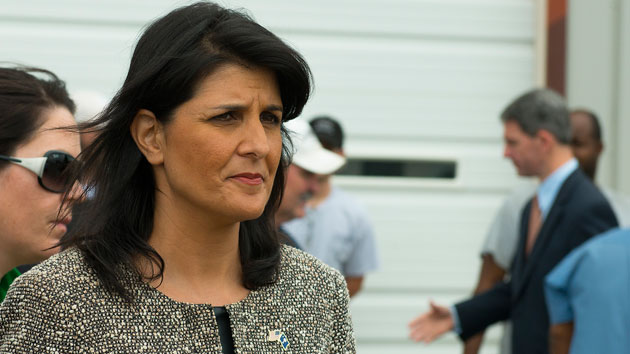 South Carolina Gov. Nikki Haley on Saturday told Republicans in Florida that Donald Trump is promoting the kind of “hate” that can lead to violence, and reminded them of the shooting of black churchgoers in Charleston last year.

Haley was speaking at a county GOP dinner in The Villages, the world’s largest retirement community, on behalf of Sen. Marco Rubio. Like Rubio, who tore into Trump (and his protesters) at an earlier event in Tampa, Haley wanted voters to think hard about the footage of Trump rallies they’d seen on TV.

She reminded the audience of Walter Scott, an African American man who was shot and killed by a police officer last April in North Charleston. “Everyone wanted to come in and riot, [but] the Scott family gave us the opportunity to right a wrong,” Haley explained. “And we stood with the Walter Scott family a month to the day and signed the first body camera bill in the country. The Republicans of South Carolina did. And that was showing—we didn’t protest; we solved the problem, and we got it right and we did it together.”

Then Haley brought up the mass shooting a few months later at Emmanuel AME Church in Charleston, mentioning three of the victims—Ethel Lance, Tywanza Sanders, and Cynthia Hurd—by name. There, too, Haley said, the families of the victims encouraged unity, not division.

“The reason why I’m telling you that story,” she said, “is we have someone running for president who instead of bringing [people] back together like we did in South Carolina, he’s telling his supporters to punch a guy in the face! He’s telling them if they don’t do the right thing to carry him out on a stretcher. He’s telling them to say, do it again. He’s not denouncing the KKK when this is exactly the same group that protested on my statehouse grounds. We can’t have Donald Trump as president! We can’t.”

Haley’s remarks to that point were one of the toughest condemnations of Trump from a fellow Republican this campaign. But as with Rubio, who couldn’t bring himself to say he wouldn’t support Trump as the nominee, Haley hedged just enough to undermine the whole thing. “It’s not that I think there’s anything wrong with Mr. Trump,” she said, acknowledging the large number of Trump supporters in the room. “He’s a supporter. He supported me in my race. It’s just lack of judgment.”

Nor would she say Trump was necessarily wrong in blaming protesters for the violence in Chicago. “We don’t need to blame—I’m not saying it’s not the protesters’ fault,” she said. “It takes two people to fight. But leadership is being able to say we are a country that needs to unite. We have had a divider-in-chief for seven years. We don’t need another. We need someone who’s gonna say, show your passion, show your energy, show it in the right way. But don’t do it with violence, don’t do it with outrage, don’t do it with hate.”

Then Haley headed off to deliver another speech to another Lincoln dinner, part of a frantic scramble by the Rubio campaign to shore up his base of support ahead of Tuesday’s primary. But his campaign’s newfound courage in attacking the front-runner may be a little too late: An NBC/Wall Street Journal poll on Sunday showed Trump with a 21-point lead.