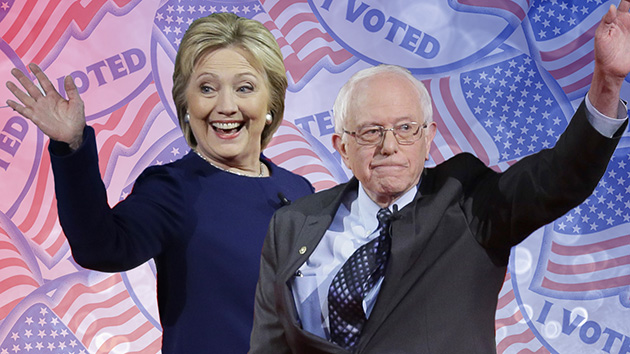 Early polling gives the advantage to Republican front-runner Donald Trump, who appears poised to maintain his lead over Sens. Ted Cruz and Marco Rubio and Ohio Gov. John Kasich, even as his hold of the GOP electorate has appeared to wane. Meanwhile, Hillary Clinton is favored to extend her Democratic delegate lead in both Michigan and Mississippi; nationally, she holds a 7 point lead over Vermont Sen. Bernie Sanders, according to the latest Washington Post-ABC News poll.

Mississippi’s polls are the first to close tonight, at 8 p.m. Eastern, with Michigan wrapping up at 9 p.m. Eastern. The Republican showdowns in Idaho and Hawaii are expected to close at 11 p.m. and 1 a.m. Eastern, respectively. Tuesday’s outcomes will set the stage for next week’s critical primaries in Florida, Illinois, Missouri, North Carolina, and Ohio. (You can track who has won delegates in each primary here.)

We’ll be here with the latest results as they come in.

UPDATE 16, Tuesday, March 8, 2:34 a.m. ET: With roughly 51 percent of precincts reporting, the networks are calling Hawaii for Trump, who leads the field with 45 percent of the vote. Cruz is well behind at 31 percent. Rubio has 12 percent and Kasich 10 percent.

UPDATE 14, Tuesday, March 9, 1:19 a.m. ET: Marco Rubio is having a bad night, indeed. The Florida senator has gained zero delegates from the Michigan and Mississippi primaries. If he fails to reach the 20 percent threshold needed to win delegates in Idaho, he could miss yet another chance at getting a little traction in the GOP field. He’s currently just over 17 percent in Idaho, with 75 percent of precincts reporting. At a rally Tuesday night, even as Rubio and his spokesman dismissed reports that his own campaign staffers had told him to drop out, Rubio looked ahead to next week’s Florida primary, where 99 delegates are up for grabs. “It always comes down to Florida,” he said. With 151 delegates in his pocket, he’s a far cry from where he needs to be. Results will be coming in soon from Hawaii, where, with a little luck, Rubio could at least get himself on tonight’s delegate scoreboard.

UPDATE 13, Tuesday, March 9, 12:18 a.m. ET: Fox and NBC and CNN have projected a Cruz win in Idaho, where he now holds more than 42 percent of the vote, with 53 percent reporting. But Clinton’s loss to Sanders in Michigan is the story of the night. The Democratic candidates debate again Wednesday evening. The GOP candidates will be debating on Thursday night. 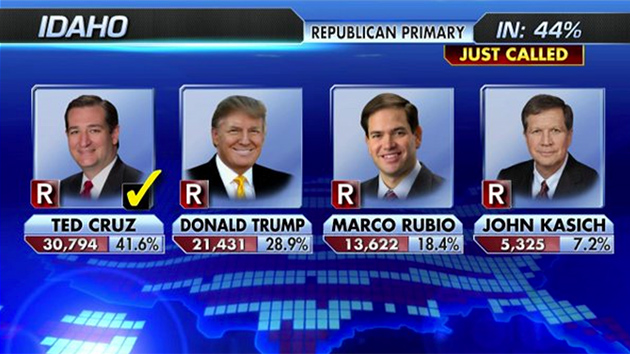 UPDATE 12, Tuesday, March 8, 11:51 p.m. ET: Polls are completely worthless, at least for Michigan, where Clinton was projected by most to have a comfortable lead. In the Idaho GOP race, with 35 percent of precincts reporting, Cruz has increased his lead to 40.8 percent. Trump hangs back with 30.1 percent, Rubio with 18.2 percent, and Kasich with a distant 6.9 percent.

UPDATE 9, Tuesday, March 8, 11:01 p.m. ET: Leading by nearly 4 percentage points with 85 percent of precincts counted in the Michigan Democratic primary, Sanders thanked supporters for turning out in Michigan and elsewhere. “What tonight means is that the Bernie Sanders campaign, the people’s revolution that we are talking about, is strong in every part of the country,” he said, speaking to reporters in Miami. “We believe our strongest areas are yet to happen.” CNN reports the Clinton campaign is preparing for a narrow loss.

UPDATE 8, Tuesday, March 8, 10:46 p.m. ET: Speaking in front of supporters tonight in Cleveland, Clinton slammed the divisive rhetoric among Republican contenders. “Running for president shouldn’t be about delivering insults,” she said. “It should be about delivering results for the American people.” Sanders is expected to speak with reporters shortly.

Hillary: If we reach for love and kindness instead of bluster and bigotry we can see the best on each other not the worst

UPDATE 7, Tuesday, March 8, 10:29 p.m. ET: The Democratic race in Michigan is still too close to call. Sanders currently holds a narrow lead over Clinton, with more than 60 percent of precincts reporting. Sanders is strongly outperforming polling; as The New Yorker‘s Ryan Lizza points out, he has done well with Michigan’s black voters.

This explains Bernie’s success in Michigan: doing much better with African Americans than he did in southern states. pic.twitter.com/UaaE4Bkf4l

UPDATE 6, Tuesday, March 8, 10:08 p.m. ET: Trump took a shot at Clinton at his press conference in Florida on Tuesday night, raising questions as to whether the Democratic front-runner would be allowed to run in the general election in light of a federal investigation into her use of a private email server during her stint as secretary of state.

Trump: Hillary is a v, v flawed candidate. She’s going to be v easy to beat. If she’s allowed to run.

UPDATE 5, Tuesday, March 8, 9:37 p.m. ET: At a rambling press conference at his country club in Jupiter, Florida, Trump thanked his supporters, including New York Yankees legend Paul O’Neill, for his string of victories in Michigan and Mississippi. Backed by a table bearing what he claimed to be his signature Trump steaks, water, and wine, the Republican front-runner echoed his confidence in running away with the Republican nomination and his ability to beat Clinton in the general election. “We started off with 17. We’re down to 4. They’re pretty much all gone,” Trump said. “There’s only one person who did well tonight, and that’s Donald Trump.”

UPDATE 3, Tuesday, March 8, 9:04 p.m. ET: With polls closing in Michigan, NBC News and Fox News have called the Republican primary there for Trump, with Kasich and Cruz battling for second. Rubio, on the other hand, has had a poor showing in both Michigan and Mississippi. Trump will be speaking in Rubio’s backyard in Jupiter, Florida, later tonight.

UPDATE 2, Tuesday, March 8, 8:31 p.m. ET: The networks are reporting Trump will win the Mississippi primary in what was a two-man race with Cruz.

UPDATE 1, Tuesday, March 8, 8 p.m. ET: Just as polls closed in Mississippi, the networks are predicting Clinton has won the Democratic primary there.