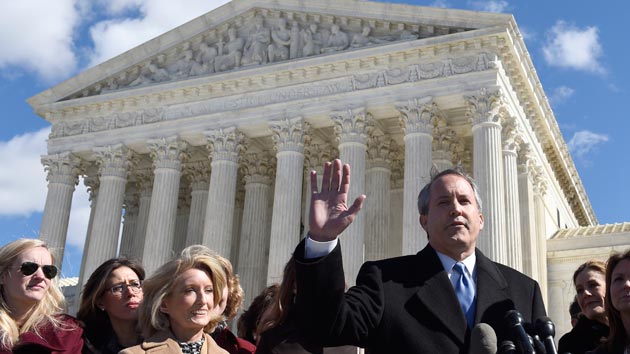 After months of anticipation, with anti-abortion and pro-choice demonstrators gathered outside, the Supreme Court heard oral arguments today in Whole Woman’s Health v. Hellerstedt, the case about a 2013 Texas abortion law, HB 2, that groups on both sides of the debate consider to be one of the most important in decades. “The Texas requirements undermine the careful balance…between states’ legitimate interests in regulating abortion and women’s fundamental liberty to make personal decisions about their pregnancies,” Stephanie Toti, the attorney for Whole Woman’s Health, told the justices Wednesday morning.

The death of conservative Justice Antonin Scalia last month means that the high court lost an outspoken opponent of abortion. Without Scalia on the bench, court watchers focused on Justice Anthony Kennedy—the most unpredictable vote in this case, and thus likely the most important. Kennedy has historically wavered on abortion—in the 1992 case Planned Parenthood v. Casey, Kennedy famously changed his mind at the last minute, leading to the court’s 5-4 decision to reaffirm Roe v. Wade. If he sides with the conservative justices in this case, the court will deadlock in a 4-4 decision, which would mean the 2015 ruling of the 5th Circuit Court of Appeals to uphold HB 2 in full will stand, and closures of Texas abortion clinics will follow.

At the center of the case are two provisions of HB 2. One requires all clinics where abortions are performed to meet the standards of ambulatory surgical centers, hospital-like facilities usually used to perform outpatient surgeries. The other provision requires all doctors performing abortions to have admitting privileges to local hospitals.

The Texas health department argues that these provisions are necessary to protect women’s health—a standard that was established in 1992 in Casey as a legitimate reason for states to pass abortion restrictions. Casey also established, however, that the state’s interest in women’s health has to be weighed against whether an abortion law would place an “undue burden” on women seeking abortion care. This is where the plaintiff’s argument lies. Whole Woman’s Health, which runs three abortion clinics in Texas, argues that the burdens on women created by HB 2—clinic closures across the state that have forced thousands of women to travel hundreds of miles for abortion care—far outweigh any interest in protection of women’s health that Texas has. They point to many medical groups, including the American Medical Association, that have said ambulatory surgical facilities and admitting-privileges requirements are not necessary to provide safe abortion care.

For a number of the justices, this medical disagreement was their central focus. Justice Sonia Sotomayor asked an early question about medical abortions—in which a woman terminates a pregnancy without surgery, usually at home, by taking a combination of pills prescribed by a physician. Under HB 2, Texas women must still go to an ambulatory surgical center to have this medical abortion. Sotomayor asked if any other pill-only medical treatments—those used to treat some types of cancer, for example—are subject to a similar requirements to be performed at an ambulatory surgical center.

“None, your honor,” responded Toti.

Justices Samuel Alito and Chief Justice John Roberts asked Toti to outline the evidence suggesting that these closures are a direct result of HB 2. She pointed out that 20 clinics closed in the wake of HB 2, including 11 on the day the admitting-privileges requirement went into effect. Both justices didn’t seem satisfied that this demonstrated a causality between the law and clinic closures, and they asked for additional evidence. Justice Kagan reminded the court that in the two weeks when HB 2’s ambulatory surgical center requirement was active in 2014—after the 5th Circuit court allowed it to go forward and before the Supreme Court intervened with an emergency hold—more than a dozen clinics closed. As soon as the Supreme Court pulled the law back, the clinics reopened.

“It’s almost like the perfect controlled experiment as to the effect of the law, isn’t it?” asked Kagan. “It’s like you put the law into effect, 12 clinics closed. You take the law out of effect, they reopen.”

When Texas Solicitor General Scott Keller stepped up to present his arguments on behalf of the state’s health department, Justices Ruth Bader Ginsburg, Stephen Breyer, Kagan, and  Sotomayor piled on. Ginsburg asked Keller how many Texas women live more than 100 miles from their nearest clinic. Keller said 25 percent, not including the women in El Paso who can access an abortion clinic that is in New Mexico, just one mile past the Texas border.

“That’s odd that you point to the New Mexico facility,” said Ginsburg. How could Texas argue that the HB 2 provisions are essential to women’s health, while also arguing that Texas women aren’t burdened by HB 2 because they can access abortions in New Mexico, where clinics aren’t subject to HB 2-like provisions? “Send them off to New Mexico, where they don’t get either, no admitting privileges, no ASC,” said Ginsburg, referring to ambulatory surgical centers. “And that’s perfectly all right. Well, if that’s all right for the women in the El Paso area, why isn’t it right for the rest of the women in Texas?” Keller’s answer circumvented Ginsburg’s point: He said that this is a standard of care that Texas believes abortion clinics should achieve, and that the New Mexico clinic is just one mile across the border from Texas.

Justice Kennedy asked Keller about another potential wrinkle in the state’s women’s health argument: He noted that while medication abortions are rising in the rest of the country, data suggests they are going down in Texas and being replaced by a rising rate of surgical abortions, a switch that Kennedy said “may not be medically wise.” And Justice Breyer asked Keller to provide examples, from before the enactment of HB 2’s admitting-privileges requirement, of women who had abortion complications and were unable to get care at a hospital. Keller conceded that such examples weren’t in the record provided to the court.

Breyer followed up: “What is the benefit to the woman of a procedure that is going to cure a problem of which there is not one single instance in the nation?”

In answering this barrage of questions from the court’s liberal flank, Keller often returned to variations on the same point: abortions can lead to complications. Justice Ginsburg took him to task over this in one memorable moment. Childbirth, she said, is a much riskier procedure than abortion. Keller responded by saying that one of the amicus briefs filed in the case disputes that fact. Ginsburg shot back, with a hint of exasperation, “Is there really any dispute that childbirth is a much riskier procedure than an early-stage abortion?”

Why is Texas creating more stringent restrictions for abortion than for other medical procedures that are far more risky? Justices Breyer, Ginsburg, Kagan, and Sotomayor each posed versions of this question to Keller. Breyer wondered why abortions were treated more strictly than colonoscopies, while Kagan made the same argument regarding liposuction. Keller argued that Supreme Court precedent allows Texas to treat abortion with different medical standards than other procedures. In response, Kagan hinted at a question that pro-choice advocates have raised since HB 2 first became law: Might Texas have passed this law to make abortions harder to obtain, rather than out of an authentic health interest? “You say you’re allowed to make this choice, and we can argue about that,” Kagan said. “I just want to know why Texas would make it.”