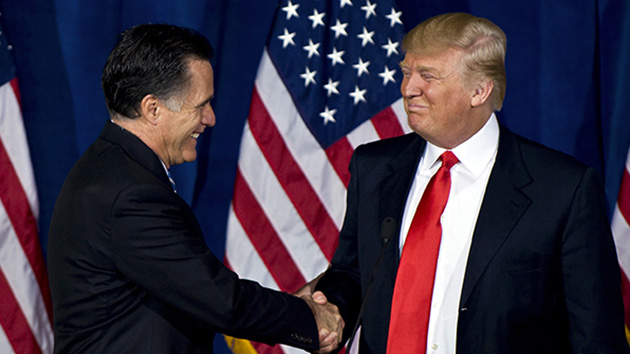 Hours before Donald Trump took a commanding lead in the GOP presidential delegate count by winning the Republican primaries in Florida, Illinois, and North Carolina—and placed second in Ohio behind home state favorite Gov. John Kasich—I asked Stuart Stevens, Mitt Romney’s chief strategist in 2012 and now a leading Republican critic of Trump, how the GOP front-runner can be stopped at this point and how far anti-Trump GOPers are willing to go to block the celebrity mogul. His succinct reply: “Hell if I know.”

With Trump’s victories on Tuesday night, the xenophobic tycoon poses an ever more pressing and profound test to the Republican Party. He still has not grabbed the nomination. But among the remaining candidates, he’s in the best position to snatch it—or to come damn close by claiming a strong plurality of the delegates. This means that a moment of truth is nearing when every Republican—including every elected official, every candidate, and every voter—will be forced to confront a simple and basic question: Are you with Trump or against him?

In the weeks and months ahead, this question will dominate American politics. At-risk incumbent Republican senators will be compelled to provide a clear answer—and how they reply could determine whether their party maintains control of the upper chamber. From dog-catcher wannabes on up, every Republican office-seeker will have to say whether he or she is standing with the wall-building, Muslim-banning, woman-deriding, Mexican-bashing, violence-encouraging Trump or not. Forget about immigration reform, what to do about ISIS, tax cuts, the debt ceiling, or Obamacare. This will become the fundamental fault line in the party, as Rs—be they conservatives or RINOs—end up on different sides of this irreconcilable issue.

This is a dilemma entirely of the Republicans’ own making. For years, many within the GOP have encouraged and exploited a politics of hate that created the toxic environment in which Trump has thrived. And until this primary season, the Republican establishment has been able to pocket the votes of anger and resentment without having to come to terms with the rage it was brewing and banking on. Take Trump out of the equation, and the 2016 GOP nomination contest was still ugly, with leading candidates seeking to gain support by appealing to the extremism within the party’s base. Marco Rubio, who suspended his campaign after being trounced by Trump in his home state of Florida, was for a while the Republican establishment’s alternative to Trump, but on the campaign trail he pounded Hillary Clinton for Benghazi—with an attack that was false. He didn’t merely disagree with President Barack Obama’s policies; he declared (robotically) that Obama had purposefully plotted to ruin the United States. And he repeatedly claimed Obama was trying to take away Americans’ guns; as a campaign stunt, he purchased a gun on Christmas Eve and said this was necessary so he could protect his family from ISIS. With all this rhetoric, he was trying to win the support of Republicans who had been led to believe that Obama was some some sort of secret Kenya-born socialist Muslim with a covert scheme to destroy the USA.

Ted Cruz, too, has embraced extremism. Just take a gander at his No. 1 campaign surrogate—his father, Rafael Cruz, a Bible-thumping fundamentalist pastor who routinely decries Obama as an enemy of God and calls for conservative Christians to gain control of every aspect of society. It doesn’t get much more divisive than that. Or maybe it does: Ted Cruz himself has hobnobbed with a pastor who has called for gays and lesbians to be executed. Ben Carson, who for a brief time led the GOP polls, endorsed the commies-under-every-bed conspiracy theories of a paranoid nutjob who believed liberals were bent on clandestinely annihilating the nation. Chris Christie legitimized tough-guy talk by vowing to kick Obama’s “rear end out of the White House” and to “beat [Hillary Clinton’s] rear end” on the debate stage.

There has been plenty of crass, crude, and violent rhetoric and hate-driven extremism in the GOP race that did not originate with Trump. Who started the Republican debate on penis size? Rubio, with his crack about Trump’s small hands. It’s just that Trump, a showman bully, has done a better job at corralling all the dark matter of the GOP and turning it into votes. (See Kasich’s recent motto: “Fight the Darkness.“) Republicans surprised by Trump’s rise within their ranks as the candidate of fear and loathing have not been paying attention.

The GOP long ago unleashed the dogs of hate. Now Trump, a la Montgomery Burns, controls the pack. And Republicans—or some GOPers—are wondering how to stop all this madness. Sen. Ben Sasse (R-Neb.) recently vowed to start a new political party if Trump is the GOP nominee. Stuart Stevens says he would support such a move. “I think it’s an individual moral choice,” he notes. “But for me, Trump is bigot, and I can’t support [him].” Yet organizing a new party would be an arduous task. Most states, thanks to the joint plotting of Democrats and Republicans, make it tough to get a third-party line on the ballot. It tends to be easier to win a spot on a ballot for an independent candidate. But many of the state filing deadlines for an independent presidential candidate occur before the GOP convention in mid-July. That is, anti-Trump Rs cannot wait for the convention and Trump’s actual nomination to begin a third-way mission, a project that will require a great deal of money and a tremendous amount of organizing. In any event, an effort of Republicans and conservatives to mount an alternative candidate to Trump, should he snag the GOP nomination, would be difficult to pull off.

Still, the test for the GOP remains. If the Trump Express does not derail, Republicans, long before the convention convenes, will have to proclaim whether they are on or off the train. And if they are off, what are they willing to do? Rubio accused Trump of being a “con artist.” How can he support any scenario in which a supposed flimflam man can gain control of the US nuclear arsenal? Romney has spoken out against Trump (though he warmly welcomed his endorsement in 2012 after Trump had gone full birther). He would not endorse a non-Trump candidate—he did campaign with Kasich in Ohio—but he urged Republicans to vote against Trump. Will he call for a new party or an alternative conservative? Though elements of the Republican establishment have mobilized against Trump (see this ad highlighting Trump’s misogyny), their campaign has so far not been well organized, well financed, or well conceived. Leading conservative activists have scheduled a meeting for later this week to concoct a plan to run a conservative challenger to Trump in the fall. Yet many of the GOP’s bigwigs have not been forced to declare their allegiance to either side. Paul Ryan and Mitch McConnell, we’re looking at you. (During his victory speech before a blinged-out crowd of wealthy swells on Tuesday night, Trump noted he had recently chatted with Ryan and McConnell and called on the party to unite under the Trump banner.)

With Trump’s triumphs on Tuesday night, the 2016 campaign slouches toward one simple notion: a national referendum on Trump. Once upon a time, Republicans hoped this election would focus on baggage-heavy Hillary Clinton. Her Tuesday night wins in Florida, Ohio, and North Carolina keep her on the path toward the Democratic nomination, and there remains much about her and her past to fuel a passionate nationwide debate. But as of now, the November election is shaping up to be an up-or-down vote on Trump. Before that choice is presented to the general public, Republicans must grapple with Trump. Virtually nothing any Republican says will matter until he or she has announced a stand on Trump. And whether or not the anti-Trumpers create a third party or rally behind a credible independent candidate, there likely is no way for the GOP to avoid a deep fissure. Some GOPers will join Chris Christie on the Trump ride; others will recoil in horror. The Trump Question cannot be ducked—and the Republican Party may not survive this reckoning.