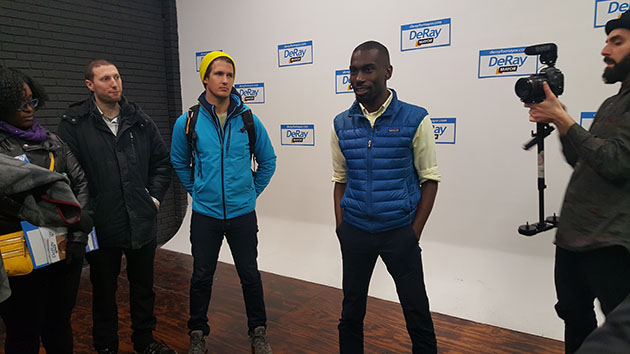 In an art gallery in the Barclay neighborhood of Baltimore, a man in a blue puffer vest held his phone at arm’s length, aimed it at his face, and pressed record.

“I’m DeRay Mckesson,” he said, “and I’m running because I believe in the promise and possibility of the city and am offering a concrete plan for what we can do to make the city work for people.”

Mckesson, a candidate for mayor of Baltimore, was broadcasting his message on Periscope, the live streaming video app. It’s impossible to know exactly how many people were watching him, but he has just shy of 40,000 followers, so it’s safe to assume they far outnumbered the crowd standing before him, whose two dozen members included five or six campaign staffers, three camera operators, and his sister and brother-in-law.

Mckesson signed off from the live stream, stuffed his phone back into his pocket, and turned toward his more modest audience.

In those moments, Mckesson appears to have underestimated the difficulty of making the rapid transition from activism to politics. After the killing of Michael Brown by police in Ferguson, Missouri, in August 2014, Mckesson catapulted to national fame when he collaborated with local activists to protest, tweeted videos of clashes between police and citizens, and distributed a newsletter that reported what was happening on the ground from an organizer’s perspective. Just a year and a half after his last big transition, from educator to activist, Mckesson is trying to make the jump from activist to the top job in a major American city.

On Tuesday, Baltimore residents will go to the polls to select their Democratic nominee for mayor, who, in a city where 79 percent of voters are registered Democrats, will likely go on to become mayor. Mckesson will not be their top choice. In all likelihood, it will be state Sen. Catherine Pugh, who has opened a wide lead in the polls over her closest competitor, Sheila Dixon, a former Baltimore mayor who was indicted for felony theft, perjury, and fraud while in office. Mckesson, despite the highest national name recognition of any candidate, has yet to register above 1 percent in any survey.

Mckesson insists he has a better chance than the polls suggest, that the people who turn out to vote will be younger and more social-media savvy than the ones who picked up their landlines to answer the surveys. But for his campaign manager, Sharhonda Bossier, it’s not too soon to assess the meaning of the race in the almost certain event he comes up short.

“For activists, it is possible to challenge institutional power and shape the conversation,” she said. “In a city like Baltimore and especially in communities of color, relational currency is so important. What he has learned and what we’re reflecting on is that it may not reflect into an electoral victory but [is] still very important. Relational currency is important.” 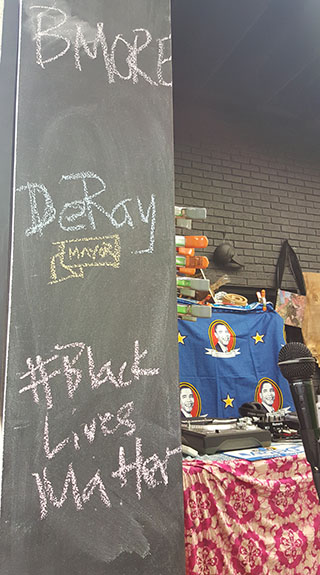 Some local activists have charged that Mckesson has only accrued this “relational currency” online, not among the residents of Baltimore. The city’s voters without a Twitter account don’t have access to the version of Mckesson that his near 340,000 Twitter followers do. But he’s won over some supporters the more traditional way. Chyrsalinn Archie, a longtime Baltimore resident who attended a meet-and-greet with Mckesson, whom she’s backing for mayor, said she learned about him not from social media, but by reading in the newspaper about his work in Ferguson and Baltimore. Due to his prominent activism, Mckesson has received more attention from the national press than any of his competitors, and that publicity is paying off among some voters who may never have seen his Twitter or Snapchat feeds.

The trouble for Mckesson—and for other activists who seek to become part of the government they’ve protested—is that he earned tremendous relational currency through his work alongside Black Lives Matter and as a co-founder of Campaign Zero, an effort to eradicate police violence, but he hasn’t been able to cash in that currency on a local level. The overwhelming majority of Mckesson’s online followers across the country won’t be able to cast a ballot for him tomorrow. Those who can vote have shown they want someone they feel has a more intimate and lasting relationship with Baltimore.

“Since April [2015] hundreds of cameras and attention seeking individuals have flooded Baltimore as if it were a trend,” said Kwame Rose, a local activist, in an email. Rose ascended to national prominence in the aftermath of the death of Freddie Gray in Baltimore police custody in April 2015, particularly after Rose confronted Fox News pundit Geraldo Rivera over what Rose felt was prejudicial coverage. “Baltimore does not need a super hero wearing a Blue cape (or vest).” He intends to vote for Pugh.

The campaign has been transparent about its underdog status. Mckesson announced his candidacy only 83 days before the election, and he has been significantly outspent by Pugh, Dixon, and other rivals, who have dropped hundreds of thousands of dollars on TV and radio ads. Mckesson has relied on web videos, phone banking by volunteers, and knocking on doors.

Steve Raabe, founder and president of OpinionWorks, a research and polling firm covering the Chesapeake Bay region, said Mckesson owed his struggles to a lack of recognition in Baltimore.

“This election is about much more than race relations and police conduct issues,” Raabe explained. “People have concerns about the lack of transportation, fixing city hall, and health care. But if he had been in the trenches in Baltimore instead of elsewhere, he’d be doing better.”

But a small number of voters, including Archie, reject the idea that being a household name in Baltimore is inherently virtuous. “Just because you’re well known—like Sheila Dixon—that’s not necessarily a good thing,” she said.

Mckesson knew he’d have trouble winning over the woman on her lawn in front of an enormous “Catherine Pugh for Mayor” sign. He approached her anyway.

“Hello ma’am, I’m DeRay Mckesson, and I’m running for mayor of Baltimore,” he said, offering her a pamphlet.

He was out of luck: She wasn’t a Baltimore voter but was tending to her uncle’s home while he was in the hospital. She had never heard of Mckesson but told him she would pass his information along, although she admitted that because her uncle taught “Cathy” Pugh when she was in school, his decision was likely already made. As he was about to leave, a man stepped outside and joined the woman on the lawn.

“Who is that?” the man asked. “Is he someone we’re supposed to be voting for?”

“He’s running for mayor!” she responded, handing him Mckesson’s pamphlet.

Pollsters like Raabe and organizers like Rose have asked similar questions during Mckesson’s run. To many residents, high-profile national organizing is less important than a commitment to Baltimore. Mckesson has done all he can to demonstrate his devotion to the city. He has emphasized his beginnings in the city and talked about his childhood in the Catonsville and Hilton neighborhoods. At campaign events, he has recounted summers spent at the local community center and shared old pictures on social media captioned simply, “Baltimore.”

“This is his home,” said Benjamin Jancewicz, a resident of the Irvington neighborhood who hosted the meet-and-greet that Archie attended. “He has a sense of ownership. This is where he’s from.”

But Mckesson rose to national celebrity elsewhere. He moved from Baltimore to Minneapolis in 2013 to work in human resources in the Minneapolis Public Schools system. In August 2014, after watching the clash between police and residents in Ferguson, he jumped in his car and drove there, hoping to get involved. It was through his work on the ground alongside local activists that he gained a following on social media.

There has long been a debate within protest movements about whether change should emerge from inside the institutions of power or from outside, but Mckesson rejects the premise that it must be one or the other. “There is no protest to politics,” he told me between mouthfuls of a chocolate chip cookie at Dooby’s, a trendy cafe on North Charles Street. “Protest is political. It is as political as what our conception of America is. It is the American Revolution, it is slaves throwing themselves off the boat.”

Black Lives Matter activists secured victories in other local elections earlier this year. In Chicago, the BLM-backed Kim Foxx unseated Anita Alvarez, the lead prosecutor on the controversial Laquan McDonald case, for a state’s attorney position. BLM organizers and supporters in Cleveland achieved a similar win when voters ousted Tim McGinty, the prosecutor who failed to indict the officers who shot and killed 12-year-old Tamir Rice. Unless Mckesson pulls off a historic upset tomorrow, he won’t join that list.

At the meet-and-greet, Jancewicz asked Mckesson whether there was truly a place for activists like him within Baltimore city government. “Do you think that the system can actually handle where you have people who have moved into positions of leadership in local and national government?” he said. “Do you really think that space exists?”

“People told us that the way to have a conversation was to not stand in the street in August of 2014,” Mckesson responded. “I think there are people who saw the problem but just didn’t know how to do the right thing. And I think those people have always been there. It’s about making sure the people with authority can actually ride that out.”

When it comes to changing the way we talk about race in America, Black Lives Matter has been one of the most successful political movements in the country’s recent history. At Dooby’s, Mckesson told me that the future of Black Lives Matter is one of continued coalition building, with the goal of strengthening what he calls “the inside-outside,” or the pressure placed on institutions of power from both agitators on the outside and political playmakers within.

“Changing the conversation is not the end of the work,” he said. “It’s the beginning.”