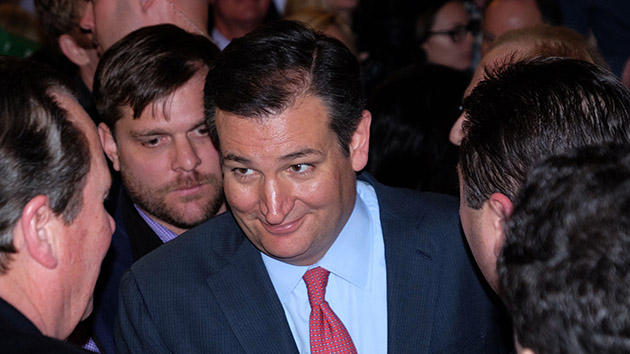 On Monday morning, Donald Trump phoned into Charlie Sykes’ Wisconsin radio show as the Republican front-runner turned his attention to the next major contest on the presidential nominating calendar. Sykes, the most influential radio talker on the state’s conservative political scene, immediately launched into a harsh line of questioning that put Trump on his heels.

“Before you called into my show, did you know that I’m a hashtag-NeverTrump guy?” Sykes asked, catching Trump clearly unaware. Sykes challenged Trump on his past misogynistic comments about women—playing a clip from an anti-Trump ad for emphasis—and asked whether Trump’s proposals to slap high tariffs on imports would hurt industry in the state, before jabbing at him for his less-than-genteel remarks about his opponents (and, on occasion, their spouses).

Right-wing talk radio often serves as a voice for the conservative grassroots, in opposition to the political establishment. But in Wisconsin this election cycle, it’s played the reverse role, helping turn Trump’s once-sizable lead in the polls into a deficit and bolstering the candidate who’s become the grudging favorite of the Republican Party’s mainstream.

Sykes has led the anti-Trump charge among the activist and establishment class in the staunchly Republican suburbs surrounding Milwaukee, a group that over the past few weeks has coalesced around Ted Cruz as its candidate of choice. A poll from the respected outfit at Marquette Law School released Wednesday has Cruz leading the field in Wisconsin with 40 percent of Republican voters, trailed by Trump at 30 percent and John Kasich at 21 percent. The prognosticators at FiveThirtyEight now give Cruz an 89 percent chance of winning the state.

Wisconsin is not obviously strong territory for Cruz, a Texan and evangelical champion who was expected to sweep the South. But as other candidates dropped out—first Jeb Bush, then Ben Carson, and finally Marco Rubio—Cruz has managed to pick up many of their supporters and open up a solid lead in the state.

Shortly before the latest Marquette survey came out, Charles Franklin, a professor of government who oversees the Marquette Law School poll, predicted that Cruz would gain substantial support from the candidates who left the race. “If you put Rubio, plus Carson, plus Bush together in our February poll, that was 31 percent of the poll just there,” he said. “If that 31 percent for the dropouts moves mostly to Cruz, then that puts him ahead of Trump, even if Trump picks up a little bit of it. There is a lot of free vote on the table right now.”

His forecast came to pass: Cruz went from 10 points behind Trump in Marquette’s February poll to 10 points ahead this month. So how was Cruz, rather than Trump, able to take so many of those votes that were on the table? Part of the answer lies with conservative talk radio.

Talk radio in the Milwaukee suburbs has been virulently anti-Trump through the campaign. During his radio tour on Monday, Trump walked into another trap when he called into Vicki McKenna’s radio show. “You are really naïve,” an exasperated Trump told McKenna after she challenged him for attacking Cruz’s wife.

Over the past two weeks, those same anti-Trump hosts have settled on Cruz as their main alternative. When Cruz launched his efforts in Wisconsin last week, he kicked things off with a friendly in-person chat with Sykes. These influential conservative voices helped persuade listeners that Cruz—himself widely disliked by the Republican establishment—was the best choice after the leading mainstream candidates dropped out.

Cruz has also picked up a steady stream of endorsements from state legislators who once backed Rubio. Earlier this week, he won the support of Wisconsin Gov. Scott Walker, still a popular figure among Wisconsin Republicans even after his presidential campaign cratered.

As Craig Gilbert explained in the Milwaukee Journal Sentinel earlier this month, the Wisconsin GOP is sharply divided along regional lines. The most reliably Republican part of the state comprises the so-called WOW counties of the suburbs outside Milwaukee: Waukesha, Ozaukee, and Washington. In that part of the state, Trump gets atrocious favorability marks from Republican voters, with 64 percent regarding him negatively and just 25 percent holding a positive view. While heavily Republican, those counties (and the rest of the southeastern part of the state that has turned to Cruz) tend to favor candidates from the establishment wing of the party; they voted for Mitt Romney in the 2012 presidential primary while other parts of the state went for Rick Santorum.

That’s not to say that Trump doesn’t have fans in Wisconsin. The more rural northern and western parts of the state feature the blue collar, tea party-aligned demographic that has been more favorable to Trump. But if Trump can’t get more Republicans to support him in the WOW counties, where turnout is reliably high, the talk radio bloc will likely see its favored candidate pick up a crucial win on Tuesday.