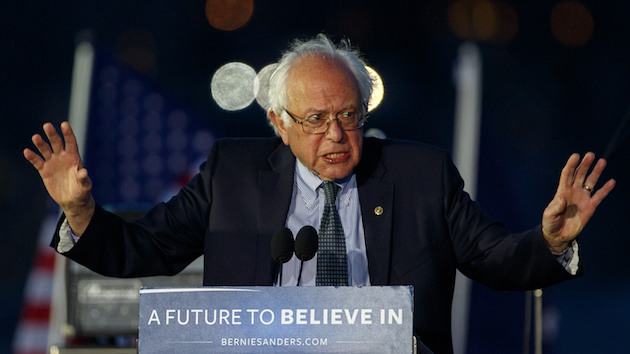 Soon after Sen. Bernie Sanders was declared the loser in the New York Democratic presidential primary on Tuesday night, his campaign manager, Jeff Weaver, was on MSNBC explaining the path ahead for the independent socialist from Vermont. Weaver contended, optimistically, that Sanders could potentially win all the remaining contests. When pressed on what the campaign would do should Sanders end up second to Hillary Clinton in the delegate hunt, Weaver said the campaign would spend the weeks between the final primary in early June and the Democratic convention in late July trying to flip the superdelegates who have declared their loyalty to Clinton.

To some, this might seem fanciful. Would Democratic officials throw Clinton to the curb in favor of the second-place guy who has never been a member of the Democratic Party? And would Sanders, the champion of small-d democracy and the scourge of machine politics, really turn to the equivalent of party bosses to secure the nomination after losing the popular vote?

Weaver justified this possible strategy by insisting that Sanders is the Democratic candidate better situated to win in the November general election. Sanders, he argued, has more appeal with independents and younger voters and generates more enthusiasm. Polls, Weaver continued, show Sanders faring better in the fall face-off than Clinton. So Weaver indicated Sanders would slog on and put aside for now (and at least until the convention) any effort to unite the party.

Oh, the polls. Any conversation with a Sanders supporter inevitably turns to the polls. And indeed the polls do say what Weaver suggested. According to Real Clear Politics‘ average of recent polls, Sanders performs better than Clinton in hypothetical general-election matchups. Against Donald Trump, Sanders leads by 15 points, Clinton by 9. Against Ted Cruz, Sanders wins by 11 points, Clinton by 2. Many Bernie-ites point to these numbers and confidently declare: Case closed!

Does that settle it? Is it reason enough for Weaver to say essentially that Sanders must win the nomination by any means necessary for the good of the party?

Maybe not. There is one missing factor in these polls, and it might be huge. Sanders has yet to face a true negative ad campaign aimed at destroying his public image. Were he to be the Democratic nominee, he would be confronted with hundreds of millions of dollars in negative ads designed to rip him apart. And everyone knows what that pummeling would focus on: He’s a self-proclaimed socialist.

Clinton has taken a few pokes at Sanders, claiming his policy proposals are pie in the sky and his numbers don’t add up. She has depicted him as a rhetorician, not a doer, and contended (absurdly) that his push for a single-payer system would somehow cause millions of people to lose health care. But this is nothing compared with the onslaught that Sanders would be up against as the nominee. The ads write themselves: “Don’t take our word for it, take his. He’s a socialist!” Cut to a super-cut of Sanders proclaiming “I am a socialist” over and over.

Of course, almost all Americans are socialists to some extent. (You believe in Social Security and Medicare? Congratulations, you get your socialist card.) But the word still has the potential to frighten or put off voters in the crucial swing states. And there will be other lines of attack against Sanders: the usual tax-and-spend stuff Republicans always hurl at Democrats (but to a greater extent), the radical writings of his past, his unconventional personal life, and more. It’s not difficult to imagine a veiled campaign that exploits the fact he’s not a Christian.

Still, the overarching meme will probably be that he’s a socialist. And how might that play out? A few months ago, I asked Weaver and Tad Devine, Sanders’ top strategist, about how Sanders would counter such an assault. They claimed they were not worried in the least and mentioned no plan for dealing with such an inevitable attack. Voters won’t “get hung up on this,” Devine said, noting that Sanders’ admission that he is a socialist bolsters his authenticity as candidate. Every voter will know by the fall election that Sanders is a socialist, he said, and thus it won’t be a surprise.

Once, Devine continued, people said don’t vote for a black man because he cannot win the presidency; now some say don’t vote for a socialist because he cannot win. His implication was that such talk is nothing more than a self-limiting scare tactic among progressives. Moreover, Devine commented, Democrats have long been red-baited by Republicans merely for being liberals and have too often run away from their ideological leanings because of that. Wouldn’t it be refreshing, he asked, to have a Democratic candidate who cannot be left-shamed?

Perhaps. These are all lovely assumptions, and they could prove true. Maybe the socialist charge will not have much firepower. But the point is that until Sanders is tested under such battlefield conditions, polls that compare his performance against Trump to Clinton’s are meaningless. As the Clinton people will say—and they’re not wrong on this—she has withstood decades of attacks, some real and fact-based, some phony and underhanded. In a way, she is already damaged goods. Voters know much about her—especially her negatives. Certainly, she, too, would meet a tsunami of mud in the general election. (Benghazi! Emails! And more!) Yet much of this has already been baked into the cake when a pollster asks a voter to choose between her and Trump or Cruz. Sanders would be virgin territory for the dirt-throwers of the right. A clean canvas.

This is not to say that Sanders and his populist crusade would not be able to prevail against a billion dollars in ads assailing him as a crazy socialist hell-bent on raising taxes and expanding government. But until he’s the target of such a blitzkrieg, hypothetical comparisons have little currency. Any sophisticated political operative knows these particular poll numbers are no basis for picking a candidate. Nor are they a rationale for Sanders, should he finish in second place, to continue his campaign. There may well be other reasons for him and Weaver to fight Clinton all the way to the convention. And there are plenty of reasons for progressives and Democrats to support Sanders. Yet the unsullied Sanders is not the Sanders who would be on the ballot in November. So his campaign and his backers should dump these fantasy-league polls if they want to persuade others that they have a firm grasp on political reality.