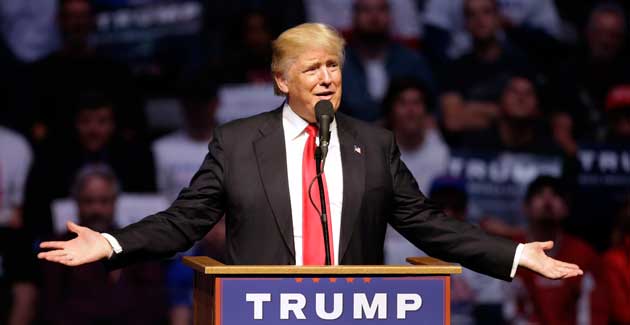 The other day, I bumped into Trent Lott, the former Republican Senate majority leader who’s now at the law and lobbying firm Squire Patton Boggs (its clients include Airbus, Goldman Sachs, and Royal Dutch Shell). He’s always polite and chatty—these days he’s promoting a book he wrote with former Democratic Sen. Tom Daschle called Crisis Point that decries the partisan polarization of Washington and offers proposals for de-gridlocking the city—and he asked me what I was up to. I noted that I had just finished listening to a Donald Trump speech. Lott rolled his eyes. I asked which candidate he liked best, though I had a good guess. Almost all the former Capitol Hill GOPers who are now lobbyists in DC are pulling for Ohio Gov. John Kasich, and, sure enough, Lott declared he’s on Team Kasich. And, Lott added, he had been trying to thwart Trump.

Lott said he had actively tried to broker a deal between Kasich and Sen. Marco Rubio (R-Fla.), another Washington Republican favorite whose presidential campaign did not last too long once the voting started. This was Lott’s plan: Kasich and Rubio would agree to run as a ticket, with Rubio in the veep slot, and the pair would keep this quiet and not announce the deal until days before the Republican convention. This dramatic, headline-grabbing move, in Lott’s thinking, would dominate the news, as GOPers gathered in Cleveland, and potentially rewrite the narrative of the Republican race. That is, the Kasich-Rubio ticket would be the story, not Trump. This would “shake up the landscape,” Lott said.

Lott told me that he had put some time into this idea but, alas, it was now probably dead. Why? First, he said, Kasich’s alliance with Sen. Ted Cruz (R-Texas), which lasted several nanoseconds, had gotten in the way. That ill-fated deal—under which Kasich would not campaign in Indiana and give Cruz a one-on-one shot at Trump—bolstered Trump’s claim that Republican insiders were plotting against him and conniving to undermine the will of  GOP voters. Another brokered arrangement, Lott said, would look awful. In essence, the party deal-makers could only get one shot to concoct a stop-Trump deal, and they had blown their chance.

And there was another reason to pull the plug on the Kasich-Rubio plan, Lott said: It now seemed as if Trump would snag the 1,237 delegates needed to obtain the nomination—or get damn close. Lott is one of the growing number of GOP bigwigs saying that if the real estate mogul is close to the magic number, it will be all but impossible to not hand him the presidential nomination. Not even a Kasich-Rubio dream ticket—well, it’s a dream for K Street Republicans, at least—could stop Trump, if he’s within spitting distance of 1,237.

I later asked a Kasich adviser about Lott’s plan, and he said, “The Kasich-Rubio or Rubio-Kasich team has been hanging around for months as a concept that could potentially be very popular with the delegates. I know of no active pursuit of that concept presently, perhaps because what I have heard is that Rubio has been making overtures to Trump.” (Rubio and Trump! How’s that for wonderful political gossip?)

Lott went on to note that he believes Trump could win a general election against Hillary Clinton. “There’s something happening in this country, and Trump has tapped into it,” he explained. Lott pointed out that when he goes back home to Mississippi he comes across plenty of blue-collar workers who are pissed off about trade deals and immigration. They’re for Trump, and some are Democrats. He noted that when he was in Congress he supported every trade deal that came through but now would not. And, he added, did you know this: One out of five households in this country don’t have anyone working in a job. His analysis: It’s a mess out there, and Trump could well ride populist anger into the White House.

But would Lott vote for Trump over Clinton? “Yes, I would,” Lott answered, without any hesitancy. Really? I replied. He said he would have no qualms doing so. But, he added, if Vice President Joe Biden were the Democratic candidate, he would vote for Biden.

“That’s not going to happen,” I said.