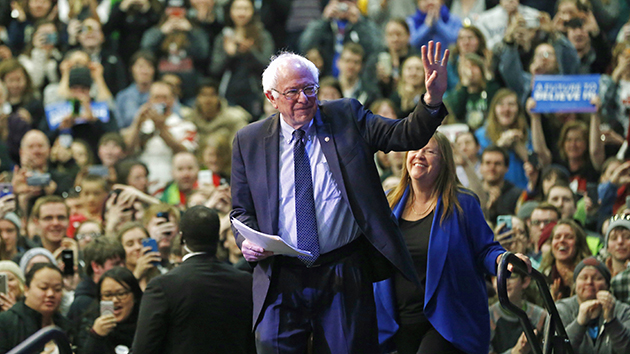 The delegate math is daunting for Bernie Sanders. As numbers-cruncher Nate Silver explained last week, the democratic socialist senator from Vermont has to win handily big states—most notably New York and California—in order to close his gap with Hillary Clinton in the pledged delegate count, and then he must convince hundreds of superdelegates to back him.

But Sanders will be able to fight to the very end, for one simple reason: He has a lot of money. Each month this year, the Sanders campaign has raised more money than the last. In January, he hauled in $20 million; in February, $43.5 million; and in March, $44 million. (Clinton raised $29.5 million in March.) And while Sanders is spending that money at a fast clip, he is collecting enough to sustain the high burn rate. The campaign spent $50 million in February yet ended the month with more cash in the bank ($17.2 million) than at the beginning of the month ($14.7 million). There is no complete data available yet for March.

Candidates usually have much less cash than the Sanders campaign has in the bank when they end their White House bids. Clinton concluded her first presidential campaign in June 2008 with virtually no money. She had $26,046,667 in the bank, but owed $25,201,722 in debt.

Other failed candidates usually are close to tapped out—or they owe money—when they pull the plug. When former Texas Gov. Rick Perry ended his second presidential bid last fall, he had about $45,000 in his campaign bank account. Mike Huckabee, the last candidate to fall to John McCain in the 2008 primaries, had $79,762 in his coffers after he ended that run.

Cash problems often force candidates out of a race. Wisconsin Gov. Scott Walker’s presidential bid was cut short largely because he was spending money rapidly without attracting new donations. He dropped out last fall with $982,513 in the bank, and almost all of of that would be spent in subsequent months to cover pending bills.

Often the money dries up when a candidate has a poor showing in a state or when big-money donors start to question a candidate’s path forward. But Sanders defies that trend. Even after poor performances on Super Tuesday and in the March 15 primaries, Sanders went on to big wins in several smaller contests in the second half of March and experienced another record fundraising haul.

With expensive states like New York, Pennsylvania, and California coming up, his campaign shows no signs of financial hardship. That means he can continue to compete.

Here’s a list of how much cash in the bank recent candidates had at the end of the month in which they called it quits, based on disclosures they filed with the Federal Election Commission.

**The Jindal campaign’s only FEC report after the Louisiana governor dropped out of the race on November 17, 2015, was his termination report, which covered the months of October through December 2015. At the end of the year, he had no money in the bank. On September 30, six weeks before he dropped out, he had $260,939.