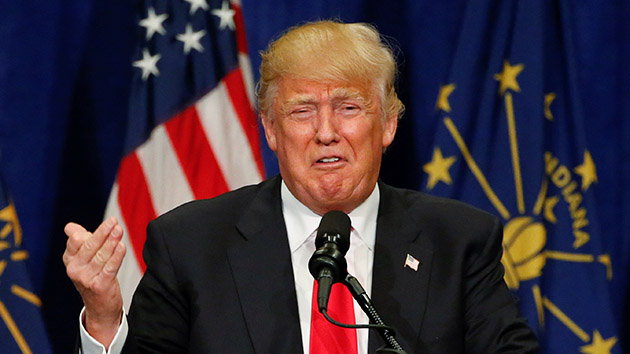 Hillary Clinton’s campaign isn’t going to let Donald Trump quietly walk back the more extreme positions he took in order to secure the Republican nomination. On Monday, as Trump begins distancing himself from his earlier tax plan now that he’s the presumptive GOP nominee, the Clinton campaign organized a press call to rip the plan as a massive giveaway to the top 1 percent. “This is the most risky, reckless, and regressive tax proposal ever put forward by a major presidential candidate,” said Gene Sperling, the former director of the National Economic Council, speaking for the Clinton campaign.

Trump’s campaign hasn’t exactly been known for its depth of policy details. But one of the few comprehensive plans that Trump put forward was a scheme to cuts taxes drastically. Released last fall, Trump’s tax plan would slash rates across the board, but with most of the benefits accruing to the rich and uber-rich, as the top income tax rate would drop from 39.6 percent to 25 percent.

“We still think facts and numbers matter and should in this campaign,” Sperling said. He pointed to independent analyses of Trump’s plan showing that it would cost anywhere from $9 trillion to $12 trillion over the first decade. Most of the benefits of these tax cuts would go to the wealthy. According to the liberal Center for Budget and Policy Priorities, $3.5 trillion, or 1.5 percent of gross domestic product, would go to people earning more than $1 million dollars per year. The Tax Policy Center found that 40 percent of the money in Trump’s tax cuts would go to the top 1 percent, with the bottom 60 percent of the country getting 16 percent of those tax cuts.

“To put it simply,” Clinton policy adviser Jake Sullivan said, “Donald Trump has put forward a tax plan that places him squarely on the side of the superwealthy and corporations at the expense of the middle class and working families.”

Over the weekend, Trump created some confusion about whether he actually stands by his tax plan. On NBC’s Meet the Press, Trump painted his proposal as just an opening bid that would inevitably change during negotiations with Congress, and he even seemed to suggest that he’d like to see taxes go up on the wealthy. “For the wealthy, I think, frankly, it’s going to go up,” he said. “And you know what, it really should go up.”

The Clinton campaign isn’t ready to let him to ditch his stances. “The only thing one can do is look at the black and white of his paper and not be fooled by his shifting comments,” Sperling said. The Clinton aides also suggested that Trump’s recent flirtations with refinancing the country’s debt posed a dire threat to the global financial system. “It’s somewhat shocking,” Sperling said, “that in a time when our country is celebrating the economic foresight of Alexander Hamilton that the presumptive candidate for president, Donald Trump, is openly advocating that the United States no longer honor 100 percent of its debt or protect our full faith and credit.”

“We frankly think that Mr. Trump’s economic plans have not received the scrutiny they’ve deserved,” Sullivan said, promising that the Clinton campaign plans to keep hammering the point home throughout the course of the race as a major area of difference between the candidates.

In the middle of the call, as luck would have it, Trump took to his favorite communication medium to stick by his tax plan:

I am lowering taxes far more than any other candidate. Any negotiated increase by Congress to my proposal would still be lower than current!