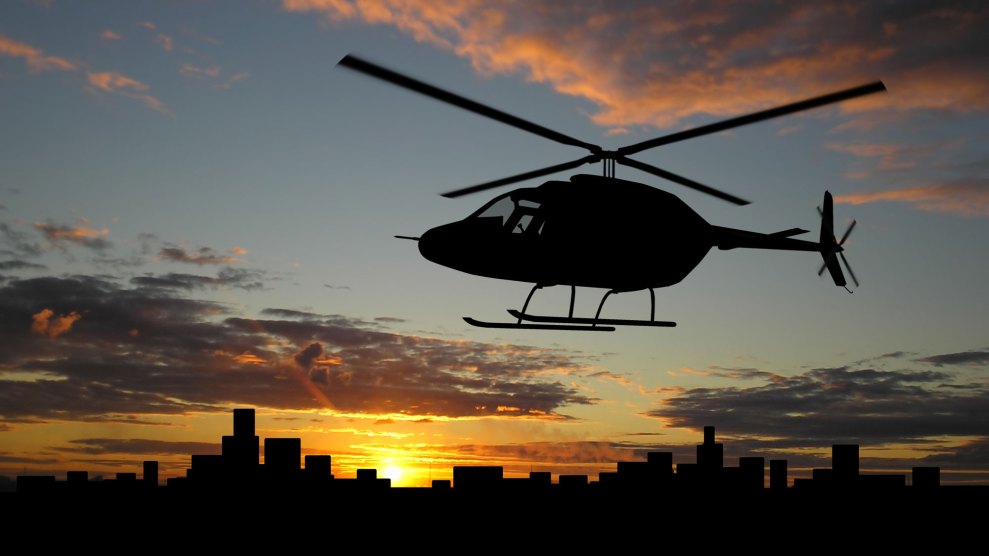 Sen. John McCain of Arizona is banking his political career on a simple but compelling argument: His Republican primary opponent, emergency room doctor and state Sen. Kelli Ward, is a nut.

As a state senator in 2014, Ward convened a nearly two-hour hearing on the conspiracy theory that the government is poisoning the populace by spraying chemicals, known as “chemtrails,” from airplanes. Ward maintains she was simply responding to the concerns of her constituents and hoped that actual experts might be able to dispel their concerns, although she said at the time that she was “open” to introducing legislation on chemtrails.

But the chemtrails hearing was hardly a one-time incident. In her short political career, Ward has flirted with the conspiracy-theory fringe by making appearances on 9/11 truther radio programs, advising citizens to stay vigilant against UN helicopters, warning against government “indoctrination,” and proposing an unusual theory that the Affordable Care Act was part of a plot to force rural residents to move to cities.

McCain leads Ward in the polls, but with more than a quarter of voters undecided, he still has less than 40 percent support, according to the most recent survey of the race—an uncomfortable position for a five-term incumbent. If he can survive the August primary, he still faces a tough reelection fight in November against Democratic Rep. Ann Kirkpatrick. McCain himself has suggested that Donald Trump’s emergence as the party’s presidential nominee could put his normally safely Republican seat in jeopardy this fall. “This may be the race of my life,” he told donors at a private fundraiser, according to audio of the event leaked to Politico.

Ward, who represents a largely rural district in the state’s northwest corner, is particularly concerned about a UN agreement called Agenda 21. Designed to promote sustainable development worldwide, the compact is nonbinding and has never been approved by the US Senate. Nonetheless, Ward co-sponsored a bill in 2013 that would prohibit Arizona from complying with Agenda 21. As she explained at a hearing, Agenda 21 wasn’t just about sustainability—it was about breaking the back of rural America in order to coerce citizens into moving to cities. “I’d go so far to say that what we’re doing with health care relates to Agenda 21 as well, because we’d like to see those rural hospitals close and fold under the pressure of not taking money from the federal government to hold them up,” Ward said. “Because when those things close, that does push people toward more centralized living in high-rise apartments [and] not in the rural areas, which tend to be freer thinkers and freer livers.”

In a 2013 interview with an Arizona radio host and chemtrails activist named Luca Zanna, Ward discussed mysterious helicopters that had been spotted in Arizona, as well as the prospect of martial law, or even a foreign power sending troops to subdue American citizens. “I can tell you I have an apartment down here in Phoenix that I stay in during the session, and I hear helicopters all the time that I hear outside my window,” Ward said. “Now I don’t know if they’re medical helicopters, I don’t know if they’re searching for bad guys on the ground because there’s some kind of shooting or some kind of activity.”

Zanna then rattled off a a string of conspiracy theories. He told Ward (erroneously) that the Federal Emergency Management Agency signed a deal to allow Russians to work on US soil “in case there is an emergency.” (Ward called the plan “ridiculous.”) Zanna played an audio clip from a caller warning about UN helicopters he’d seen in Kingman, Arizona. He mentioned the presence of Chinese troops on the ground in the United States. He said the Army was “breaking into people’s homes” in Phoenix. And he suggested that a recent blackout had coincided with “helicopter activities.”

“I don’t see why United Nations helicopters or any type of helicopters—Chinese or Russian—should be playing around in our backyard right now,” he told Ward.

“Well, I would rather for people to be prepared and ready and never have to use it because nothing happens than to be caught unawares,” Ward replied. After the host once more floated the possibility of the US Army or a foreign occupying force attacking Arizonans, Ward called for vigilance. “Well, I hope that people wake up and educate themselves and understand what could happen,” she said. “If it doesn’t happen, we’ll all be very thankful, and myself, I’ll be praising God because I love God and I’ll be praising him that that happened. But if something does happen…”

Another bugaboo for Ward is Common Core, the Obama-era education standards that have become a prime target of liberal and conservative activists alike. The standards’ problems have been well documented, but Ward takes a more conspiratorial position. “The people who are going to go to public school are going to be the cogs in the wheel,” she told Zanna, agreeing with his statement that the government was turning children into “slaves.” “They’re going to be the workers. The new imperialists, or the new emperors of our world, will be the kids of the people who are pushing this because they won’t be going through this program. So it’s very scary.”

Ward, who traveled to Nevada during the 2014 Bundy Ranch standoff, reunited last spring with the Bundys’ self-described spokesman, radio host Pete Santilli, for an interview. “I think the media would like to portray that event as something completely different than what it was, but I can tell you it was a very family-friendly event,” she told Santilli of the 2014 showdown, in which activists trained rifles on federal agents. At the end of the interview, Santilli (who has called himself a “conspiracy realist,” expressed doubts about the official narrative of 9/11, and pushed chemtrails conspiracies) referred to McCain as “a domestic enemy.” He asked Ward if she agreed with that characterization. “Well, we have to support our Constitution,” Ward said.

Her flirtation with conspiracy theories presented a marked contrast with McCain, who during his 2008 presidential campaign famously told a supporter who said she didn’t trust Obama because he’s an “Arab,” “No ma’am, he’s a decent family man, a citizen that I just happen to have disagreements with on fundamental issues.”

Ward has other ideas that McCain, facing a backlash from the right over his work with the Senate’s “Gang of Eight” on immigration reform, may have a harder time using against her. Asked about her position on birthright citizenship at a local Republican Party gathering last September, she responded by making a thumbs-down gesture and blowing a raspberry, suggesting that it had been “misinterpreted for years” and that immigrants shouldn’t be able to stay just because they “create a child.” In another radio interview, she linked the spread of disease to immigrants. She warned that “polio-like illnesses” are spreading “throughout the country as the federal government shipped all of these illegal immigrants all across the country without properly treating them for health and wellness, and they’re exposing our kids, our families, to things that we should never have to be exposed to.” (Ward was referring to a 2014 outbreak of enterovirus, which has not been firmly linked to immigrants.)

Even under the glare of the election year spotlight, Ward hasn’t let McCain’s attacks deter her from associating with fringe figures. In March, long after McCain and his backers had begun mocking her for her chemtrails hearing, Ward did an interview with Alex Jones, perhaps the nation’s most prominent conspiracy theorist. Jones, a 9/11 truther who believes Prince and Merle Haggard were both killed by chemtrails, told Ward he feared for her safety. Ward said people had told her she should get an auto-starter for her car to be on the safe side and that she should travel with security.

“I really hope that things haven’t gotten that far out of control that I should be fearful for my life,” she said, “but we are always cautious, and I always have people around me who are providing security, which is great.”