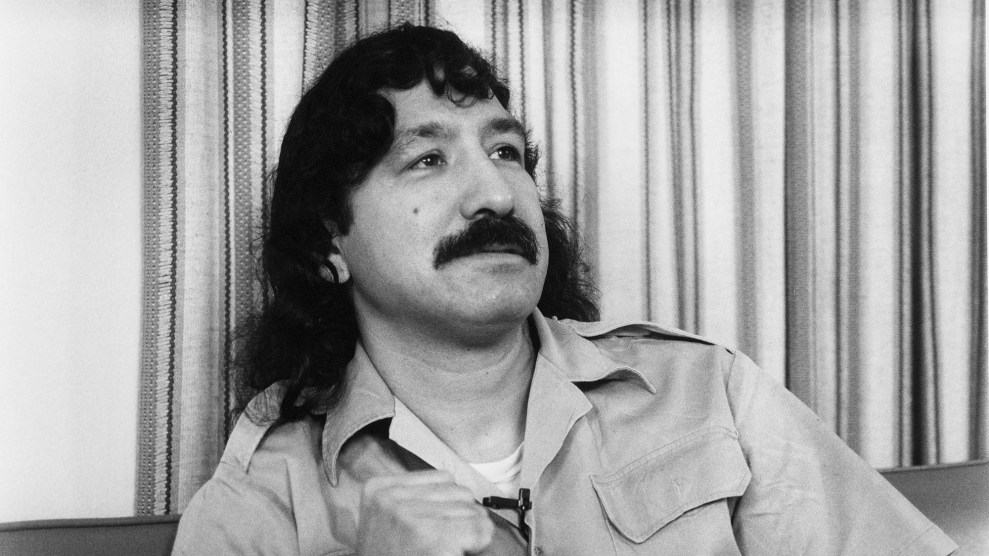 Leonard Peltier, a member of the Lakota tribe who was convicted of murdering two FBI agents in 1977, has spent 40 of his 71 years in federal prison. During that time, some have come to view him as an international symbol of the mistreatment of Native Americans by the US criminal justice system; others see him as the murderer of two FBI agents who should continue to pay his debt to society. Recently a group of prominent lawyers—backed by world leaders, civil rights activists, and several members of the US Congress—have renewed efforts to win his freedom by filing a formal appeal for clemency to the Department of Justice and requesting that President Barack Obama intervene on Peltier’s behalf.

In February, Martin Garbus, a well-known New York City trial lawyer and the lead attorney of the group, joined by former Assistant US Attorney Cynthia Dunne and attorney Carl S. Nadler, wrote a five-page letter to Obama urging him to grant Peltier clemency.* “[T]he time has come for the interests of the law enforcement community to be balanced against principles of fundamental fairness, reconciliation, and healing,” they contended.

They also submitted a 44-page petition for clemency to the Justice Department’s Office of the Pardon Attorney on behalf of Peltier, who suffers from various medical conditions, including diabetes, high blood pressure, and a heart condition. All of this, the petition notes, impairs “his ability to walk, to see, and to conduct normal life activities…He is ill-equipped to cope with life in the maximum security prisons in which he has been jailed for many years.” The petition includes more than two dozen letters from supporters including Archbishop Desmond Tutu, Coretta Scott King, several Native American tribes, and Amnesty International.

“Effectively, this Petition represents the last chance in Mr. Peltier’s lifetime for the Government to take curative and/or reconciliatory action.”

“Mr. Peltier has exhausted all appeals and is next eligible to apply for parole in 2024, in the unlikely event that he lives that long,” the letter to Obama states. “The Parole Commission has yielded to the objections of the FBI and DOJ in denying Mr. Peltier’s applications for parole at every turn. Effectively, this Petition represents the last chance in Mr. Peltier’s lifetime for the Government to take curative and/or reconciliatory action.”

Peltier’s case has long been a flash point in the strained relations between federal law enforcement and Native Americans. The killings occurred on the the Pine Ridge Indian Reservation in South Dakota, about 18 miles from Wounded Knee, where 300 Sioux were massacred by the US military in 1890.

In 1973, about 200 Sioux, led by members of the American Indian Movement, occupied Wounded Knee for 71 days to protest injustices against Native Americans and what they perceived as the corrupt leadership of the reservation’s president. By the end of the standoff, two Native Americans had been killed, 12 were wounded, and 12 were “missing” but suspected of having been killed by tribal leadership, according to Peltier’s petition.

The three years after the Wounded Knee occupation became known within Native American circles as the “Reign of Terror,” a period during which dozens of Native Americans were murdered and hundreds were assaulted by a private militia that was aligned with Oglala Lakota Souix chairman Dick Wilson and known as the “GOON squad.” Two years after that, with the Reign of Terror fresh on the minds of everyone in the area, the deadly shootout with the FBI agents occurred.

Many of the facts about the deaths of FBI agents Jack Williams and Robert Coler are disputed. The FBI says the agents were on the reservation to arrest a different man wanted for robbery and that they were not looking for Peltier, who was wanted on a separate warrant related to an alleged attempted murder of an off-duty police officer in Milwaukee. When the agents came to the reservation that day, according to the FBI, they encountered a vehicle carrying Peltier and found themselves under fire. Williams and Coler each died as a result of point-blank shots to the head.

Peltier’s version of the story is presented in detail in his petition. He maintains that after the FBI agents came on to the private property, “I heard shooting, grabbed my rifle, and ran towards a residence where there were women and children, but quickly ran in another direction because my presence had attracted additional gunfire to the area.” He says the area was surrounded by more than 100 FBI agents, SWAT team members, Bureau of Indian Affairs police, and members of the GOON squad.

“Along with many other American Indians who were present that day, I fired shots in the direction of men whom I later learned were federal agents,” Peltier notes in the petition. “At the end of extended gunfire, three men lay dead: Special Agents Jack R. Williams and Robert A. Coler, and American Indian Joe Stuntz.”

Peltier says he fled the area, eventually ending up in Canada because he thought he wouldn’t get a fair trial in the United States. Using affidavits from a woman later determined to have been either coerced or incompetent, the US government had Peltier sent back to the United States in February 1976 to stand trial. Two other Native Americans, Robert Robideau and Darrelle Dean Butler, were arrested for the deaths of the two FBI agents, but only Peltier was convicted in a trial that contained a number of irregularities, including sworn affidavits from witnesses who said they’d been coerced by the FBI. While Robideau and Butler were acquitted in 1976, Peltier was sentenced to two consecutive life sentences in June 1977.

“The finality of my conviction should not be interpreted as an endorsement of the means that were employed by the government to achieve the result.”

Peltier and his supporters have pointed out the many problems with his trial, highlighting the fact that the government eventually admitted it did not know with certainty who had fired the point-blank shots that killed the FBI agents. Nevertheless, the latest petition for clemency flatly states that Peltier is not trying to re-litigate the case: “The finality of my conviction should not be interpreted as an endorsement of the means that were employed by the government to achieve the result” (emphasis in original).

Over the years, prominent figures such as Nelson Mandela, Pete Seeger, Harry Belafonte, and Robert Redford have called for Peltier’s release.

Garbus tells Mother Jones that this is Peltier’s second formal petition for clemency. The first, submitted in 2000 during the Clinton administration, was likely undermined by a protest of 500 active and retired FBI agents who marched in front of the White House after the petition was delivered. Garbus has now reached out to several members of Congress, including Reps. John Lewis and Barbara Lee and Sen. Patrick Leahy, to advance Peltier’s cause.

“This is a different application than the one before Clinton,” says Garbus. “We hope that we will not see the same kind of opposition at this point from these FBI families, given the passage of years, given his sickness, and given his very clear expression of remorse.”

Garbus says he has not heard from any White House officials. A White House spokesperson and the FBI both declined to comment on the petition. The Office of the Pardon Attorney—the office within the Justice Department that handles requests for pardons and clemency—also didn’t respond to requests for comment.

Garbus says he’s trying to help Peltier for one simple reason: “Forty years is enough for a wrongful conviction.”

Read the letter to Obama and Peltier’s latest petition below: