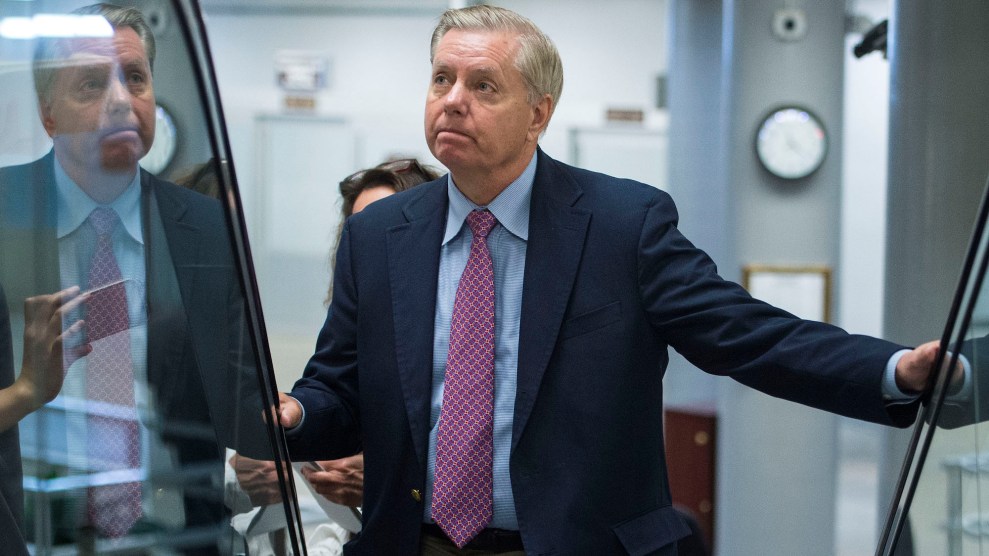 Sen. Lindsey Graham (R-S.C.) reportedly spent the weekend urging big-money Republican donors to support presumptive nominee Donald Trump. It’s a pretty shocking turnaround for a guy who was once the loudest—and sometimes only—critic of Trump in the GOP presidential field.

Before caving in to Trump’s now-inevitable victory in the GOP primaries, Graham insulted Trump, apologized to Muslims for him, called for him to be kicked out of the GOP, and endorsed two of his rivals in last-ditch attempts to block Trump from being nominated. Here’s a reminder of Graham’s greatest anti-Trump hits.

While still a candidate, Graham was essentially the only member of the GOP field to go hard at Trump from the start. He started way back on July 20 by calling Trump a “jackass” for insulting his BFF Sen. John McCain (R-Ariz.), a former POW, for getting captured after his fighter-bomber was shot down over North Vietnam in 1967.

On December 8, Graham delivered some advice for his party on CNN: “You know how you make America great again? Tell Donald Trump to go to hell.” Graham attacked Trump’s proposal to ban Muslims from coming to the United States in particular. “He’s a race-baiting, xenophobic, religious bigot” and “the ISIL man of the year” for stirring hatred against Muslims, Graham said.

During the December 15 Republican undercard debate, Graham even apologized to Muslims for Trump’s Islamophobic comments. “To all of our Muslim friends throughout the world…I am sorry,” he said. “He does not represent us.”

Graham’s finest performance probably came on February 25, when he went nuclear on Trump while talking to reporters at the Capitol. “I think he’s going to lose and he’s going to lose badly,” he said. “You can’t nominate a nut job.” He also called Trump “just generally a loser as a person and a candidate.” Despite all that, Graham foreshadowed his pro-Trump turn, saying he’d work for the eventual GOP candidate even if it ended up being Trump.

On March 7, Graham said Trump should have been kicked out of the Republican Party over his anti-immigrant comments. “He took our problems in 2012 with Hispanics and made them far worse by espousing forced deportation,” Graham said during a CNN interview. “Looking back, we should have basically kicked him out of the party…The more you know about Donald Trump, the less likely you are to vote for him.”

On March 24, Graham told The Daily Show’s Trevor Noah, a mixed-race man from South Africa, that he might have to flee the country if Trump were elected. “If Trump wins, your days are numbered, pal,” he said during an appearance on the show. “[A] young, black, liberal guy from Africa is not going to work with him.” By this point, Graham had grudgingly endorsed Ted Cruz—after first throwing his backing to Jeb Bush—and literally could not stop himself from laughing at the thought of backing the Texas senator, whom he disliked so much he joked Cruz could be shot on the Senate floor without anyone trying to help. “It tells you everything you need to know about Donald Trump,” he said in between giggling fits.

On May 6, with Trump fully in command of the GOP race, Graham said he still wouldn’t cast a vote for Trump. “I…cannot in good conscience support Donald Trump because I do not believe he is a reliable Republican conservative nor has he displayed the judgment and temperament to serve as commander in chief,” Graham said in a statement.

During a speech just two weeks ago, on May 11, Graham said “Crooked Hillary’s going to beat Crazy Donald. If he’s new and different, I think he could win. New and different is different from being crazy.” That may have been his final jab: the Washington Post reported the next day that the two men spoke on the phone and agreed to stop trading insults. “He obviously can take a punch,” Graham said, having thrown more of them than perhaps any other politician from either party.