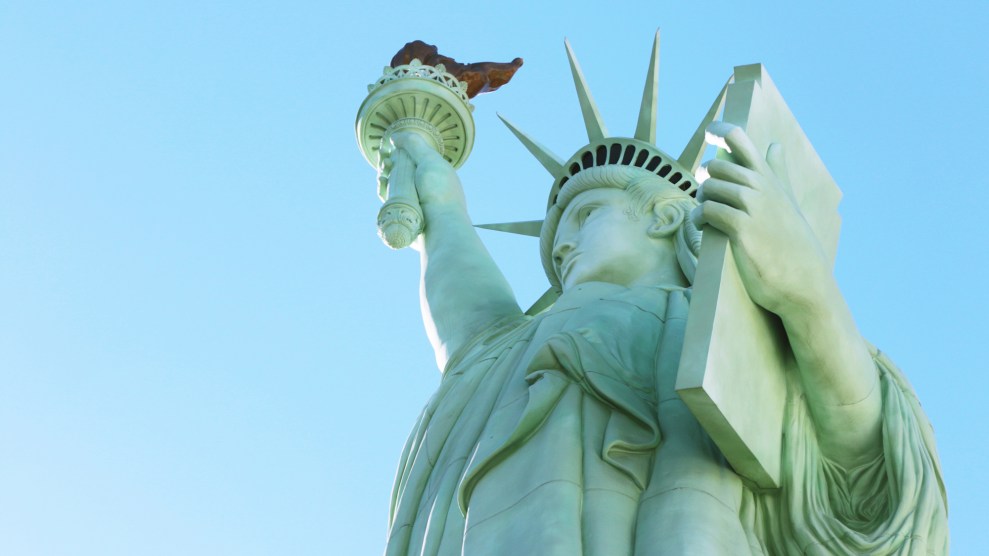 Thirteen Muslim Missouri residents are suing the US Citizenship and Immigration Services along with the Secretary of the Department of Homeland Security, alleging the agencies have unlawfully delayed their applications for citizenship.

The complaint alleges that the immigrants’ applications were funneled into a secretive Bush-era program called the Controlled Application Review and Resolution Program (CARRP) that requires immigration officials to flag applicants as national security threats based on a broad range of criteria.

The American Civil Liberties Union, which uncovered the program in 2013, and the Council on American-Islamic Relations say it illegally discriminates against applicants from Muslim-majority countries. Last year, Buzzfeed reported that this heightened review process was being used to screen incoming Syrian refugees.

The federal lawsuit was filed today by the Council on American-Islamic Relations in Missouri and a local immigration litigation law firm that’s representing the Missouri Muslims who applied for citizenship.

“The CARRP definition illegally brands innocent, law-abiding residents, like [the] plaintiffs—none of whom pose a security threat—as ‘national security concerns’ on account of innocuous activity and associations, innuendo, suppositions and characteristics such as national origin,” the lawsuit says.

USCIS does not comment on pending litigation and a spokesman declined to comment specifically about the case. The agency would not say if the plaintiffs were subject to the heightened vetting program, citing privacy concerns.

By law, USCIS is expected to process applications for naturalization within six months of receiving them, and it must make a decision on a case within four months of interviewing the applicant. However, if an immigrant is flagged for national security concerns, USCIS places the case on the CARRP track, without notifying the applicant, according to the lawsuit. Such cases are often subject to lengthy delays and cannot be approved, “except in limited circumstances,” the lawsuit says, citing the testimony of a USCIS witness in a previous case.

One of the plaintiffs in the Missouri lawsuit, a 49-year-old woman from Iraq named Wafaa Alwan, applied for citizenship in December 2014. She waited eight months for an interview, which finally took place Aug. 31, 2015. She has been waiting for a decision ever since. Syed Asghar Ali, a 47-year-old man from Pakistan, named filed his application in March 2014 and has been in limbo for more than two years, the lawsuit says.

An immigrant who is subject to the heightened vetting program can be flagged for, among other things, donating to a charitable organization that was later designated a financier of terrorism, traveling through or living in an area with terrorist activity as well as making or receiving a large money transfer.

Immigrants may also be flagged if their names appear on the FBI’s Terrorist Screening Database, also known as the Terrorist Watch List, which is estimated to include over a million names. More than 40 percent of those on the watch list have been described by the government as having “no recognized terrorist group affiliation,” according to The Intercept.

The lawsuit alleges that this process places an unnecessary burden on law-abiding applicants from Muslim-majority countries in violation of the Immigration and Nationality Act. It also argues that the program violates the Constitution because was enacted in secret, without the approval of Congress.

Although USCIS declined to respond directly to these allegations, a spokesman told Mother Jones that the agency often needs additional time to thoroughly vet each immigrant who applies for citizenship. The program is meant to ensure that immigration benefits and services are not given to people who may pose a threat to public safety, the spokesman emphasized.

The last time a major civil rights organization filed this kind of lawsuit was in 2014, when the ACLU sued USCIS on behalf on five California residents. However, shortly after it was filed, the government quickly wrapped up the pending citizenship applications, granting three of the plaintiffs citizenship and denying the applications of the other two. After that, the ACLU and their clients dropped the legal case.

This happens frequently, said Jim Hacking, the lead attorney on the Missouri case that was filed today. That includes a 2008 lawsuit he filed on behalf of three dozen immigrants whose applications were pulled into the Controlled Application Review and Resolution Program.

“When I filed for the 36 [clients], cases that had been delayed for three, four, five years all of a sudden became a priority,” he said. “This is because the government tries to root out the case. They don’t want a federal judge ruling on whether CARRP is legal or illegal. So they try to get rid of all the plaintiffs by either approving or denying their case.”

USCIS also declined to comment on the decision to resolve the applications of immigrants in the 2014 case.

Even if the new case doesn’t end in a court ruling, Hacking hopes it will put the program back in the spotlight. If society is going to hold Muslims to a higher standard when it comes to immigration and assume that they’re terrorists then we should do it out in the open and debate it, Hacking said.

“Let’s not just let an agency decide on its own that this is the way things are going to be,” he said “That’s not how America is supposed to work.”