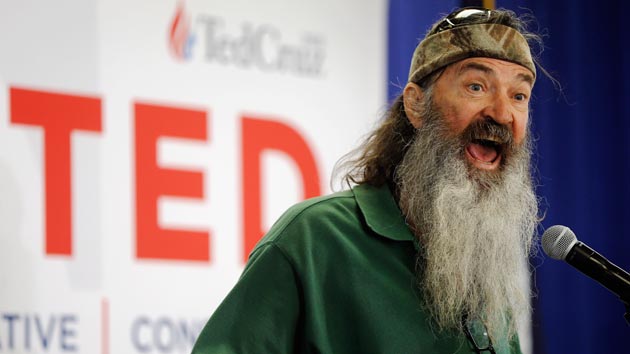 Tuesday’s Indiana primary is arguably the final frontier for Ted Cruz to keep alive any prospect of winning the Republican presidential nomination. The poll numbers aren’t looking good for him in the Hoosier State, but he’s holding out hope that Indiana will join several other Midwestern states in rewarding him for his socially conservative record. But in his quest to become the favorite of social conservatives, Cruz has aligned himself with a number of far-right extremists who could cause him trouble in the increasingly unlikely event that he finds himself in a general election battle in November. From the star of Duck Dynasty to activists who advocate executing abortion doctors and gay people, here’s a partial list:

The Benham family: In February, Ted Cruz appointed David and Jason Benham, twin brothers and real estate entrepreneurs based in North Carolina, to his campaign’s Religious Liberty Advisory Council. As Mother Jones reported in April, the brothers have been at the forefront of every battle to oppose gay rights in North Carolina in recent years. They’ve opposed gay pride parades and organized anti-abortion protests, and at one point David Benham equated the battle against marriage equality with fighting Nazis. The brothers were most recently instrumental in stoking opposition to a Charlotte nondiscrimination ordinance that eventually led to HB 2, the state’s transgender “bathroom bill” that has sparked a national uproar.

Their father, Flip Benham, is a well-known anti-gay and anti-abortion street preacher in Charlotte. In November, Cruz touted Benham’s endorsement in a press release. In 1994, Benham became the director of the anti-abortion group Operation Rescue, and he later renamed it Operation Save America. He still leads the group. Benham is best known for having helped convert Norma McCorvey—the “Jane Roe” of the landmark 1973 Supreme Court case Roe v. Wade, which legalized abortion—to fundamentalist Christianity and to renouncing her past support of abortion rights. In 1995, Benham opened the national headquarters of Operation Rescue next door to the Dallas abortion clinic where McCorvey was working at the time as a marketing director. The two struck up a friendship, and when McCorvey eventually converted, Benham performed her baptism.

Troy Newman: After Flip Benham moved and renamed the national Operation Rescue operation, Newman took over its western branch, now based in Wichita, Kansas. In January, Cruz announced his campaign would form a Pro-Lifers for Cruz coalition co-chaired by 10 anti-abortion activists. Newman is one of them. The campaign’s press release announcing the coalition describes Newman as the author of Their Blood Cries Out, a 2000 book in which he wrote that “the United States government has abrogated its responsibility to properly deal with the blood-guilty. This responsibility rightly involves executing convicted murderers, including abortionists, for their crimes.”

Last week, after Cruz appeared to be making a play for more women voters by announcing former Republican presidential candidate Carly Fiorina as his running mate, executives from several pro-choice groups wrote an open letter to the Cruz campaign encouraging it to fire Newman from Pro-Lifers for Cruz due to his history. “Troy Newman’s history of violent rhetoric and harassment toward women’s health providers is truly beyond the pale,” they wrote.

Kevin Swanson: Cruz was a featured speaker at the National Religious Liberties Conference in Iowa last November. He was introduced by conference organizer Kevin Swanson, a pastor who is known for his belief that gay people should be killed. Right before bringing Cruz to join him onstage, Swanson gave an impassioned speech in which he clarified that gay people should be executed by the government only after they’ve had sufficient time to repent.

“Yes, Leviticus 20:13 calls for the death penalty for homosexuals,” Swanson said, pacing the stage, his voice rising. “Yes, [in] Romans chapter 1, verse 32, the Apostle Paul does say that homosexuals are worthy of death. His words, not mine! And I am not ashamed of the Gospel of Jesus Christ!” Here’s Swanson’s speech in full:

Cruz’s appearance at the event, along with those of former GOP presidential candidates Mike Huckabee and Gov. Bobby Jindal, caused an uproar, but the Cruz campaign made no moves to distance itself from Swanson’s ideology. Cruz spokesman Rick Tyler told the Rachel Maddow Show that Swanson’s call for the execution of gay people was “not explicit.” In December, the campaign changed its tune and told USA Today that it was a mistake for Cruz to attend Swanson’s event.

Tony Perkins: Perkins is the head of the Family Research Council, which the Southern Poverty Law Center has classified as an anti-LGBT hate group, and the chair of Pro-Lifers for Cruz. Early in his career, while working as a reserve police officer in Baton Rouge, Louisiana, in 1992, Perkins was suspended from duty after failing to report to his supervisors that an anti-abortion group was planning a violent protest at a local abortion clinic. Perkins had learned this information because he worked part-time for a local conservative TV station, and his camera crew was often outside the clinic, filming confrontations between pro-choice and anti-abortion protesters.

While managing a US Senate campaign in 1996, Perkins paid more than $80,000 to purchase the mailing list of Ku Klux Klan leader David Duke. He later gave a speech to the Louisiana chapter of the Council of Conservative Citizens, another white supremacist group, in front of a Confederate flag. Under his leadership, the Family Research Council has touted a number of false claims about LGBT people, most famously the idea that gay men are more prone to sexually abuse children. (Many medical groups, including the American Psychological Association, have debunked this claim.)

James Dobson: In February, Dobson, the founder of Focus on the Family, the largest organization of the religious right in the United States, endorsed Cruz for president in a TV ad and in robocalls to voters.

Focus on the Family has several million subscribers to its monthly magazines and more than 220 million listeners of its various radio broadcasts, which often featured Dobson until he left to start his own broadcast ministry in 2010. The group has become known for its deep-pocketed opposition to marriage equality measures and candidates across the country who back gay marriage. It also supports the practice of reparative therapy, which aims to “cure” homosexuality, and has continued to do so even after Exodus International, a reparative therapy group it once partnered with, disbanded and disavowed the practice.*

Dobson has also made some extreme statements over the years. He blamed the 2012 mass shooting at Sandy Hook Elementary School on the legalization of abortion and same-sex marriage, warned of an impending civil war over gay marriage, and said he opposes the Harry Potter books because they promote a “New Age ideology” to kids.

Phil Robertson: In January, the Cruz campaign put out a video of the candidate duck hunting with Phil Robertson, the star of the A&E show Duck Dynasty, who has come under fire for his anti-gay comments. Robertson has compared homosexuality to bestiality and said AIDS is God’s “penalty” for immorality and gay sex.

In this video from the Cruz campaign, Robertson endorses Cruz, saying, “Ted is my man.” Robertson and Cruz are wearing face paint and hunting gear, shooting rifles into the air.

“I am thrilled to have Phil’s support for our campaign,” Cruz said at the time. In February, Cruz suggested that Robertson would make a good ambassador to the United Nations.

Correction: An earlier version of this article misidentified the time period when James Dobson stopped appearing on Focus on the Family radio broadcasts.