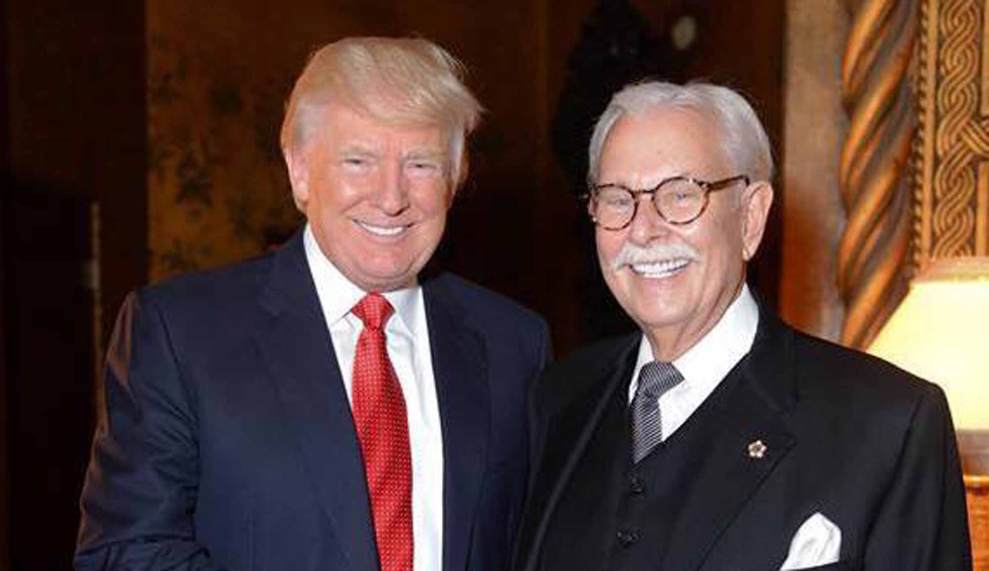 Donald Trump and his longtime butler Anthony SenecalFrom the <a href="https://www.facebook.com/anthonypetersenecal">Facebook page</a> of Anthony Senecal.

Anthony Senecal, who worked as Donald Trump’s butler for 17 years before being named the in-house historian at the tycoon’s Mar-a-Lago estate in Palm Beach, has repeatedly published posts on his Facebook page that express profound hatred for President Barack Obama and declare he should be killed.

On Wednesday, Senecal put up a post that read:

To all my friends on FB, just a short note to you on our pus headed “president” !!!! This character who I refer to as zero (0) should have been taken out by our military and shot as an enemy agent in his first term !!!!! Instead he still remains in office doing every thing he can to gut the America we all know and love !!!!! Now comes Donald J Trump to put an end to the corruption in government !!!! The so called elite, who are nothing but common dog turds from your front lawn are shaking in their boots because there is a new Sheriff coming to town, and the end to their corruption of the American people (YOU) is at hand !!!! I cannot believe that a common murder is even allowed to run (killery clinton) OR that a commie like bernie is a also allowed to also run !!!! Come on America put your big boy pants on—this election you have a choice—GET YOUR ASS OUT AND VOTE !!!! Thank you !!!!

Though Senecal’s Facebook page is public, this message could only be read by his Facebook friends. In an interview with Mother Jones, Senecal confirms that those were his words: “I wrote that. I believe that.”

Here’s a screen shot of the missive: 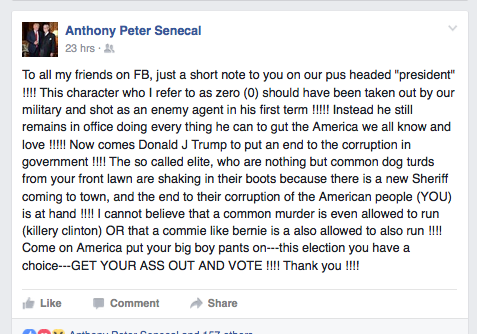 A spokeswoman for the Trump campaign says, “This individual has not worked at Mar-a-Lago for many years.”

“I cannot stand the bastard,” Trump’s longtime butler says of Obama.”I don’t believe he’s an American citizen. I think he’s a fraudulent piece of crap that was brought in by the Democrats.”

Senecal, who is 84, says he has been employed at Mar-a-Lago since about 1959. Trump acquired the property in 1985, and Senecal remained on staff. “As [Trump] says, I came with the furniture,” Senecal remarks. About seven years later, he became the butler for the celebrity mogul who is now the GOP’s presumptive presidential nominee. In 2009, Senecal informed Trump he wanted to resign as butler, and Trump persuaded him to stay on as the in-house historian at Mar-a-Lago. There is no salary for the job, Senecal says, but he makes money leading tours of the estate.

Senecal regularly posts screeds on his Facebook page from a far-right perspective in which he decries Obama and his wife—along with Hillary Clinton, other Democrats, and Republican leaders. He often refers to Obama as “zero,” and several times he has called for the president’s execution. He confirms that he has written all the posts on the page that have appeared under his name. “It’s all me,” he says.

Looks like that sleezey bastard zero (O) is trying to out maneuver Congress again, if the truth be known this prick needs to be hung for treason!!!

I feel it is time for the SECOND AMERICAN REVOLUTION !!!!! The only way we will change this crooked government is to douche it !!!!! This might be the time with this kenyan fraud in power !!!!! …[W]ith the last breath I draw I will help rid this America of the scum infested in its government–and if that means dragging that ball less dick head from the white mosque and hanging his scrawny ass from the portico–count me in !!!!!

On June 6, 2015, one of his Facebook friends wrote a comment on Senecal’s page saying, “We need to send the seals to SOROS and ROTHCHILD and REMOVE them and their cronies–then HANG BO and most of Washington–and we’ll have a CHANCE to get things straightened out.” This person added, “everyone knows they’re CRIMINAL – HANG ALL OF THEM.” Senecal replied, “I love the idea.”

On May 26, 2015, a commenter on the page excoriated Obama and his wife, Michelle (referring to the First Lady as “Sasquatch”): “If he gets hung, then Sasquatch does too.” Senecal responded, “Amen….Two of the most DISGUSTING individuals on the face of God’s Green Earth !!!! Puke !!!!!!”

Here are screen shots of these posts: 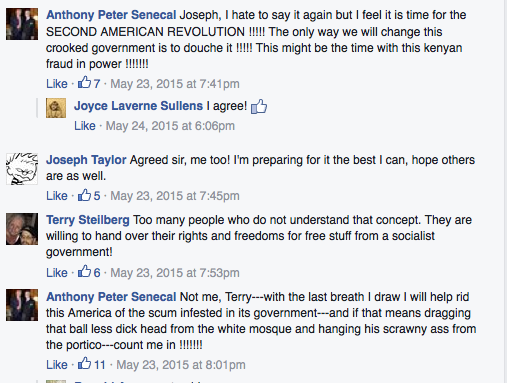 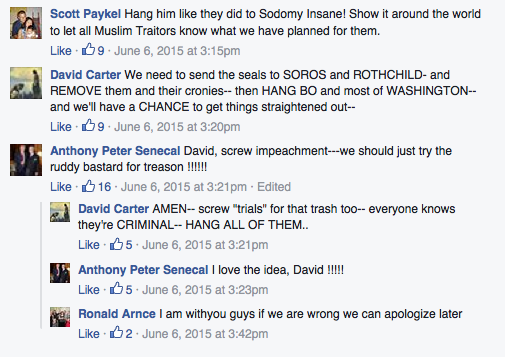 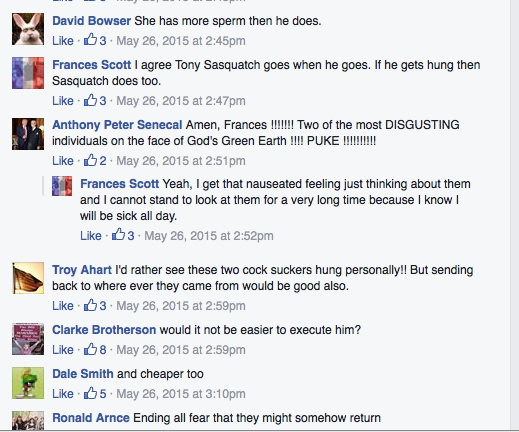 Asked why he has posted messages calling for Obama to be killed, Senecal says, “I cannot stand the bastard.” He continues: “I don’t believe he’s an American citizen. I think he’s a fraudulent piece of crap that was brought in by the Democrats.” Trump’s historian is a birther. Senecal notes that he has been suspended in the past on Facebook for publishing material that violated the service’s guidelines.

One recurring theme in Senecal’s messages is that Obama is a secret Muslim bent on destroying the United States. On September 18, he wrote, “Our current ‘president’ is a rotten filthy muzzie !!!!! Period !!!!!! He continues his war on Christians !!!!!! …zero is against the people of America !!!!!” Months earlier, he declared of Obama, “look at the number of goat screwing muzzies he is degrading our government with !!!!!” (One of Senecal’s Facebook associates replied, “We need to LYNCH that NIG — NOW!!”) In another post that day, Senecal suggested Obama was preparing to impose martial law on the United States.

On June 6, a commenter on Senecal’s page wrote, “I will gladly fight…to get rid of the commie muzzie and his vp in the white house…[and] we need to get rid of his whole administration and those that support and those muzzies he has put in highly senative positions in our government.” Senecal answered, “Exactly, Ruth !!!!!”

In a June 23 message, Senecal complained, “there are to [sic] many fkn muzzies in America !!!!!” Two days later, he wrote on Facebook, “muzzie shits…are invading our country.”

On August 12, he published a photo of Obama with this caption: “If ALLAH HAD AN ASSHOLE IT WOULD LOOK LIKE THIS.” On June 18, he referred to Obama as an “unfeeling sack of camel feces.”

Senecal’s Facebook timeline is loaded with assorted extremism. A year ago, he derided Clinton: “Stop the LYING BITCH OF BENGHAZI, NOW—killery clinton !!!!!! She should be in prison awaiting hanging !!!!!!!” Last summer, Senecal posted an image comparing Obama to Hitler and Lenin. On September 11, he groused about the Iran nuclear deal and assailed “the treachery of zero, the pig ‘president’ and traitor ketchup kerry.” And Senecal has taken shots at the GOP establishment. In a September 7 post, Senecal denounced then-House Speaker John Boehner and Senate Majority Leader Mitch McConnell and said both were “FKN CROOKS and should be run out of D.C, on a rail and covered in hot tar.” A few months prior to that, he proclaimed, “revolt and hang all of the a-holes in Congress and the crooked government !!!!! Let’s get ‘er done !!!!!!”

Senecal often has included links to articles about various right-wing conspiracies. On September 14, he cited an article that claimed that Obama “is leading the Muslim Brotherhood.” The day before, he had linked to a story from a conservative site claiming that nearly half of Americans would support a military coup against Obama.

He has regularly published images of the Confederate flag on his Facebook page. And in a May 10, 2015, post, he exclaimed, “Call me biased, racist…call me anything you want–I could care less !!!!!” The following month, he wrote on the page that once Obama leaves office, “only a FEW Negroes and josh earnest will even remember him.”

A lengthy and flattering New York Times profile of Senecal in March noted, “Few people here can anticipate Mr. Trump’s demands and desires better than Mr. Senecal…He understands Mr. Trump’s sleeping patterns and how he likes his steak (‘It would rock on the plate, it was so well done’).” The story reported that in 1990, Senecal “took a sabbatical to become the mayor of a town in West Virginia, where he gained some notoriety for a proposal requiring all panhandlers to carry begging permits.” The article did not mention his Facebook page.

The Times did point out that “Senecal’s admiration for his longtime boss seems to know few limits.” On June 16, Senecal exclaimed on his Facebook page, “Today, my employer and friend Donald J Trump announced he was running for the Office of President of the United States… NO ONE deserves to run for and be elected to this GREAT office, than Mr. Trump. !!!!!”

Here is a roundup of screen shots from Senecal’s Facebook page: