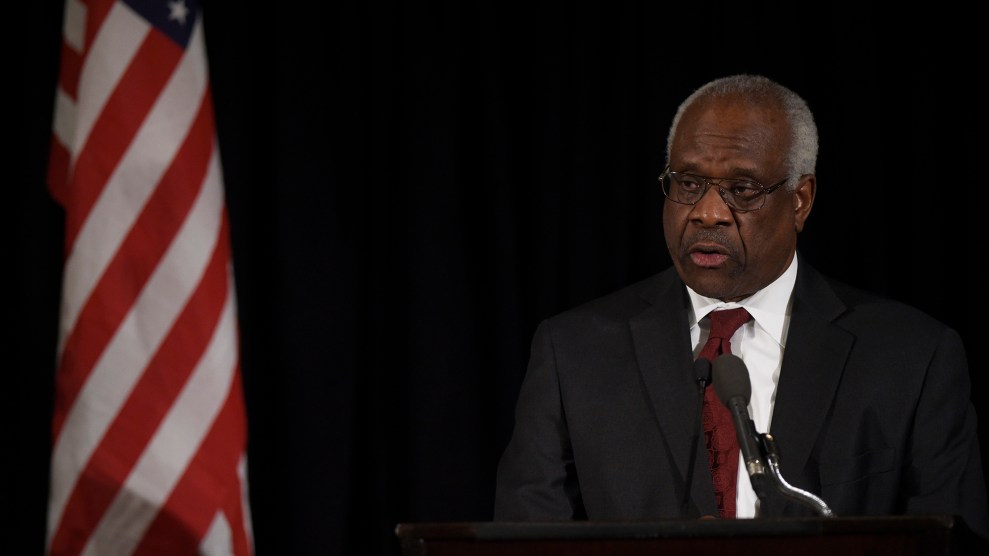 With the late Justice Antonin Scalia no longer on the Supreme Court, it was up to Justices Samuel Alito and Clarence Thomas to object passionately to Monday’s decision that invalidated a Texas law imposing onerous restrictions on abortion clinics. Alito was so upset that he read a summary of his dissent from the bench. Thomas wrote a fiery dissent of his own, and he and Chief Justice John Roberts also signed on to Alito’s dissent.

In that opinion, Alito slammed the majority, claiming it “simply disregards basic rules that apply in all other cases.” He asserted, “The Court’s patent refusal to apply well-established law in a neutral way is indefensible and will undermine public confidence in the Court as a fair and neutral arbiter.” He was essentially saying the five justices who backed the decision—the four liberal justices and swing-vote Justice Anthony Kennedy—were treating the abortion providers of Texas with undue favoritism. He howled that it was unfair that the majority had thrown out the entire Texas law, not just the most egregious portions.

Focusing in great detail on a technical legal matter, Alito complained mightily that the Supreme Court granted the petitioners leeway to pursue the case after it should have been shut down. He also challenged the evidence presented by abortion providers to back up their contention that the Texas law had led to the closure of abortion clinics for no good reason. He ended his dissent with this put-down: “When we decide cases on particularly controversial issues, we should take special care to apply settled procedural rules in a neutral manner. The Court has not done that here.”

While reading the summary of the dissent, Alito groused, “If at first you don’t succeed, sue, sue again.” He said that in any other case, the court would have stuck to procedural rules, but “this is an abortion case, so the regular rules don’t apply.” As Alito spoke, Justice Elena Kagan, a member of the majority who was sitting next to him, kept rubbing her forehead.

Alito’s dissent was stinging in a legal-wonky way. It did not rely on Scalia-like punches. Thomas offered a more sweeping condemnation. In his own dissent—which he did not read from the bench—he griped, “The Court should abandon the pretense that anything other than policy preferences underlies its balancing of constitutional rights and interests in any given case.” Thomas repeatedly hammered the justices in the majority for caring more about outcomes than the law itself. “As the Court applies whatever standard it likes to any given case,” he huffed, “nothing but empty words separates our constitutional decisions from judicial fiat.”

Thomas objected to the idea that abortion providers have constitutional standing to object on behalf of their patients. “This suit is possible only because the Court has allowed abortion clinics and physicians to invoke a putative constitutional right that does not belong to them—a woman’s right to abortion,” he wrote. He viewed this new decision as a radical reversal of Supreme Court precedent following the Planned Parenthood v. Casey decision of 1992 that permitted some restrictions on abortion. “The majority’s undue-burden test looks far less like our post-Casey precedents and far more like the strict-scrutiny standard that Casey rejected,” Thomas wrote, “under which only the most compelling rationales justified restrictions on abortion.” In other words: You guys just flipped the past 25 years of abortion law without acknowledging it.

Thomas is an absolutist, and he suggested that all abortion rulings of the last four decades are illegitimate because the Supreme Court erred in its famous 1973 Roe v. Wade decision by affirming a constitutional right to abortion. “I remain fundamentally opposed to the Court’s abortion jurisprudence,” he wrote.

Add it all together and Thomas sounds about as gloomy regarding the Supreme Court as his late compatriot Scalia, who died in February. “Unless the Court abides by one set of rules to adjudicate constitutional rights,” Thomas wrote, “it will continue reducing constitutional law to policy-driven value judgments until the last shreds of its legitimacy disappear.”

In the final paragraph of his angry dissent, Thomas proclaimed in dark fashion, “[T]he entire Nation has lost something essential.” He backed this assertion up with an all-is-lost quotation from a law review article claiming, “[W]e have passed the point where ‘law,’ properly speaking, has any further application.” That article was written by Scalia.