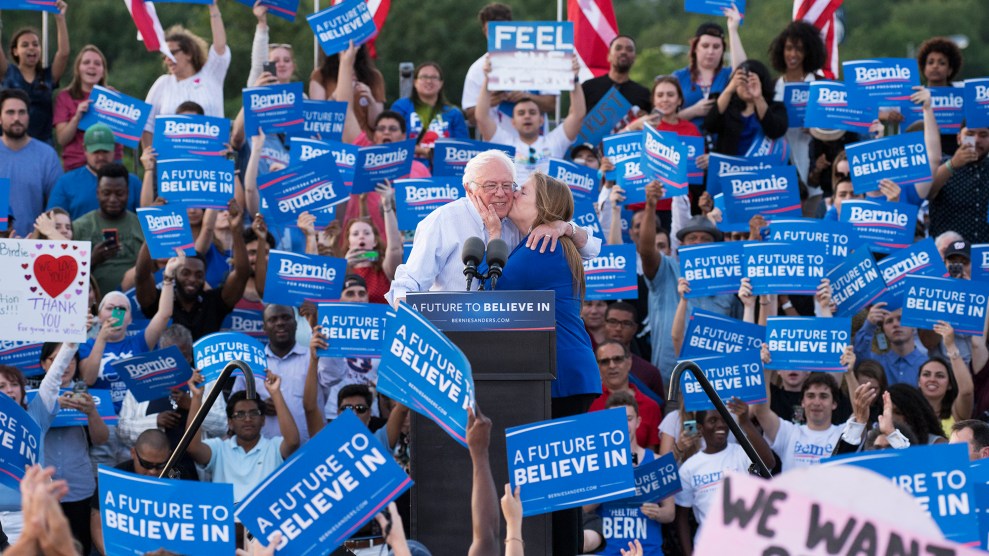 If one issue has caused Bernie Sanders supporters to claim that the Democratic primary has been rigged in favor of Hillary Clinton, it’s the role played by superdelegates, the elite party members who can vote for whichever candidate they want at the party’s convention next month. The superdelegates backing Sanders are themselves calling for reform of the system that will empower them at the convention—but the real changes aren’t likely to come until after November.

The Democratic Party created superdelegates in 1982 to give party insiders more control of the nominating process, which they feared could be overtaken by activist voters who would choose candidates with little chance of winning the presidency. They include members of Congress, governors, state party leaders, and more than 200 members of the Democratic National Committee who were elected by fellow state party officials. In total, there are 714 of them this year, about 15 percent of all delegates to the party’s convention in Philadelphia. According to the Associated Press delegate tracker, Clinton has the public support of 581 superdelegates so far, while 49 back Sanders.

Mother Jones spoke with some of the superdelegates supporting Sanders ahead of today’s primary in Washington, DC, the final contest of the Clinton-Sanders race. These superdelegates are looking beyond Sanders’ almost-certain defeat to the changes they’re hoping to implement at the convention and afterward. Near the top of their agenda is the very superdelegate system that will give them a voice at the convention.

Historically, Democrats have adopted primary reforms by way of special commissions between elections, rather than at the convention itself. These commissions have included elected officials, party members, strategists, and activists and been chaired by Democratic politicians. They generally hold hearings, listen to testimony, and draft recommendations for the party to adopt.

Sanders supporters are sure to raise the issue of superdelegates at the convention, but without a majority of delegates there, they are unlikely to pass sweeping reforms to the process in Philadelphia. Instead, they are more likely to succeed at the committee level, where the Standing Committee on Rules or the Standing Committee on Credentials could call for a commission after the November election. A majority of all delegates would have to approve that measure—but setting up a commission is far less sweeping than changing the process at the convention. It’s simply a promise to look at the issue.

“We probably need to have another one of those commissions that they have had off and on over the decades,” says Nancy Jacobson, a superdelegate from Florida who supports Sanders. “Typically this is something that’s been done by having a commission afterwards with public hearings and public deliberation.”

The superdelegate system was itself created by the Hunt Commission, chaired by North Carolina Gov. Jim Hunt, which convened from 1981 to 1982. At the time, there was a sense among the party establishment that the grassroots had too much control over the nominating process and that, unchaperoned, rank-and-file voters were electing candidates who couldn’t win national elections. Liberal Sen. George McGovern of South Dakota lost in a historic landslide in 1972. In 1980, Sen. Ted Kennedy’s primary challenge to President Jimmy Carter from the left deeply divided the party and prompted party leaders’ desire for more supervision. The goal of the Hunt Commission was to create a nominating process that would help Democrats win again, and superdelegates became the way to give the party apparatus more sway.

Now, however, Sanders supporters believe it’s time to rethink the role of the superdelegates, and another commission might be the best way to do it.

Paul Kirk, a pro-Sanders superdelegate who served as chairman of the Democratic National Committee in the 1980s, says he would not be surprised if a decision is made at the convention to create a post-election commission to evaluate the superdelegate system. Kirk, who served briefly in the US Senate when he was appointed to fill the seat of the late Kennedy, says the healthiest way for the party to move forward is to re-evaluate after the election. “Let’s look back and see how we can improve our performance, how we can do better, how it can be more representative, and kind of improve the vibrancy and the inclusiveness of a major political party,” he says.

Maine was the first state where Democrats moved to strip superdelegates of their status by forcing them to vote in accordance with voters in the state’s caucuses—a provision that won’t kick in until next cycle. Troy Jackson, a pro-Sanders superdelegate and candidate for state Senate in Maine, believes the system needs to change. “States that support Sanders and the superdelegates go for Clinton, I think that’s where the biggest animosity is coming from,” he says, adding that people feel “there’s nothing they can do to influence that establishment.”

Kirk believes there are too many superdelegates, but sees merit in keeping some party leaders involved in the process. “It’s very hard to organize and manage a party that puts all sort of new, grassroots activists” in charge, he says. “As in anything else, you need some continuity, some experience.” He adds that “at a minimum, I would say that state party chairs ought to be automatically part of a delegation because they have the responsibility for party building.”

Jacobson, an elected DNC member in Florida, sees no reason for members of Congress to have a vote at the convention. As public figures, she believes, their endorsement alone gives them sway over the process. “We’re elected by our peers in the party, we’re called party leaders and are public officials who are elected Democrats,” she says. “There’s a good rational for our involvement in the process, although not necessarily in the manner we currently are. But the rest of them, the rationale is a little thinner.” Jacobson is angry that a majority of superdelegates endorsed Clinton last summer, before the primaries had even begun. She believes that early move created the perception that a Clinton win was inevitable by inflating the delegate count in media reports that merged pledged delegates and superdelegates into one number showing Clinton with a big lead.

Pete Gertonson, a superdelegate from Idaho, is also frustrated by the fact that so many superdelegates jumped on the Clinton bandwagon early on. He thinks it is reasonable to have superdelegates at the convention to ensure that the best person to win in November is selected. But he says the superdelegates put their collective thumb on the scale too early in favor of Clinton, helping a candidate he believes is the weaker of the two. “I didn’t want to commit at all,” he says. “To me, I believe that we should be all uncommitted and go in to the convention and listen to the debates, make our decisions based on who we think is going to win in November.” Gertonson announced his support for Sanders after the Vermont senator won his state’s caucuses in March, but says he only did so because he saw his peers rushing to endorse Clinton.

If Clinton loses to Donald Trump in November, the party will almost certainly feel the need to reflect on a primary process that had party elites rallying behind a losing candidate. But if she wins, the party members who comprise whatever commission may have been mandated at the convention will have little incentive to reform a system that will have netted it the presidency in five of the last seven elections.