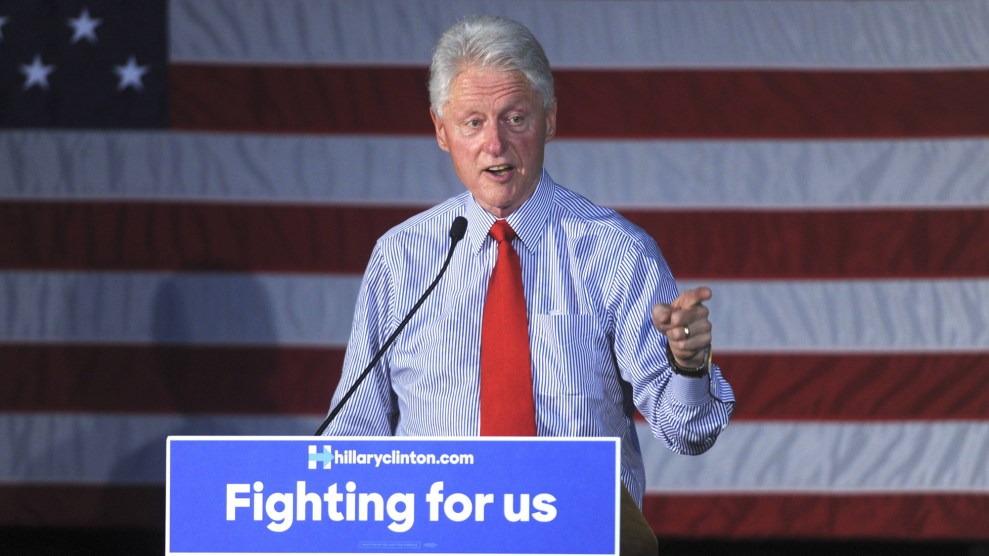 On May 12, 2015, the private equity firm Apollo Global Management announced it was unloading the remainder of its stake in Noranda Aluminum. Apollo had gained control of the Tennessee-based company in a 2007 leveraged buyout and had subsequently followed a familiar playbook in the cutthroat world of corporate takeovers: It saddled Noranda with the debt it had used to buy the company and then extracted large dividends. As Noranda struggled to stay solvent, Apollo eventually cashed out of the firm. In early 2016, the debt-riddled aluminum company declared bankruptcy, shut down its largest smelting plant in Missouri, and laid off hundreds of employees.

That same day in 2015 that Apollo disposed of its stake in Noranda, Bill Clinton pocketed $250,000 for a speech to one of its subsidiaries, Apollo Management Holdings.

The company declined to answer questions about Clinton’s speech. It would not discuss the subject of his talk or any details about the event. A Clinton spokesman did not respond to requests for comment.

The Apollo speech came a month after Hillary Clinton—who recently said her husband would be “in charge of revitalizing the economy” in her administration—formally declared her candidacy. Prior to launching her White House bid, Clinton had ditched the profitable speaking circuit. (She earned almost $22 million between April 2013 and March 2015, according to an analysis by CNN.) But the former president continued to deliver lucrative paid speeches until late 2015, banking about $3 million in payments just in the months that his wife had been running for president.

According to a financial disclosure filed by Hillary Clinton’s campaign two weeks ago, Bill Clinton gave speeches to a broad range of outfits that doled out more than $200,000 per appearance. These companies and organizations include Univision (which is owned by Haim Saban, a major funder of pro-Hillary super-PACs), investment bank Stephens Inc., computer giant Oracle, and the American Institute of Architects. But Apollo is among the more controversial companies that paid Clinton’s hefty speaking fee. (In 2013, Hillary Clinton also gave a speech to Apollo, netting $225,000.)

Apollo is known as a vulture fund, so named because these types of firms swoop in to buy up distressed companies, in some cases stripping them of their assets and leaving little more than a corporate carcass behind. Founded in 1990, Apollo rose from the ashes of Drexel Burnham Lambert, a major investment bank that collapsed in 1990 due to junk bond pioneer Michael Milken’s illegal trading (for which Milken would receive a 10-year prison sentence, of which he would serve 22 months, and a $600 million fine). When Drexel fell apart, Leon Black, a managing director at the firm, led a group of his co-workers in launching Apollo. Since then, the company’s growth has made Black and his co-founders immensely wealthy. Black is worth about $4.7 billion. Another Apollo co-founder, Joshua Harris, is worth more than $2 billion and in 2011 bought a controlling interest in the Philadelphia 76ers.

Apollo manages a massive $170 billion in assets, spread out between real estate, private equity, and credit. The firm owns or controls large stakes in a host of brand-name companies, including gambling empire Caesars Entertainment Corporation and the suburban mall staple Claire’s. Earlier this year, it purchased security company ADT for $7 billion in a leveraged buyout. Apollo’s financial empire has been built, in part, on business practices that at times have benefited Apollo’s bottom line at the expense of the companies it has subsumed. “Leon is a vulture fund operator,” a businessman who deals with him once told author Daniel Glick. “He feeds on carrion. He eats the animals that other animals have killed.”

Apollo has mastered the art of the leveraged buyout—think the sort of corporate raider activity that Mitt Romney came under fire for during the 2012 campaign. It’s when an investment firm borrows huge amounts in order to purchase a controlling stake in a company, saddles the company with the debt from the buyout, and then pays itself back by extracting funds from the original company. While leveraged buyouts can prove highly profitable to firms such as Apollo (and often the executives at the company that was purchased), it can be devastating to employees of the bought-out companies.

Take Noranda Aluminum, whose New Madrid, Missouri-based smelting plant once employed 900 people. As the St. Louis Post-Dispatch detailed in 2014, the plant was a major employer in the region, one that offered many unionized middle-class jobs, with starting salaries of about $50,000.

Apollo bought Noranda in 2007 in a deal financed with over $1 billion in debt, which then became Noranda’s responsibility. As the Post-Dispatch reported, Noranda almost immediately began paying out lavish dividends to its shareholders—that is, to Apollo. Noranda paid $216.1 million in dividends in 2007, followed by $102.2 million the following year. Meanwhile, falling aluminum prices were eating away at the company’s profits. In 2010, Apollo took Noranda public, but that didn’t work out too well for the company, especially workers at the New Madrid plant.

In May 2015, Apollo decided to sell off its holdings in the company—which was already down to a 33 percent stake after it had sold off its majority interest in 2012. By February 2016, Noranda declared bankruptcy, ceased operations at the New Madrid plant and laid off nearly all its employees at the plant.

Noranda is hardly the lone example where workers have suffered following an Apollo takeover. After the company bought New York chemical company Momentive Performance Materials in 2006, Apollo slashed wages and cut jobs. In 2014, Momentive briefly filed for bankruptcy, eventually erasing $3 billion of its $4.17 billion debt. “Momentive hasn’t posted an annual profit since Apollo bought it,” Bloomberg reported at the time, blaming the debt from the buyout as the cause of Momentive’s troubles.

Apollo has been a major player in the real estate market. In addition to owning a number of choice properties, it manages assets for mortgage lenders. As Bloomberg reported recently, two entities associated with Apollo—ARM Manager LLC and Apollo Residential Mortgage Inc. (AMTG), which each share an address with the company’s headquarters—were recently subpoenaed by the New York State Department of Financial Services. The agency is probing loans owned by these and other firms in which low-income homebuyers with bad credit can take out risky bond-for-title loans, under which borrowers can lose their entire stake in their homes if they miss a single month’s payment. “AMTG and a subsidiary of Apollo Global Management that manages funds for AMTG received a subpoena from the New York State Department of Financial Services and intends to cooperate fully,” a spokesman for AMTG said.

Bill Clinton’s Apollo speech came during a presidential campaign in which Hillary Clinton and her Democratic rival have often stoked populist anger over the economy. “There aren’t enough good-paying jobs, especially for young people,” the Democratic front-runner said in February. “And yes, the economy is rigged in favor of those at the top.”

Hillary Clinton has recently said her husband, whose presidency was marked by historic economic growth, would serve as a kind of economic adviser in her administration. And her husband has said, “I will do everything I can to help should she be elected. I have asked, actually, to be given the job of trying to help every part of the United States that has been left out and left behind economically.” But to do that job well, Bill Clinton would have to take on firms such as Apollo that he himself has benefited from.