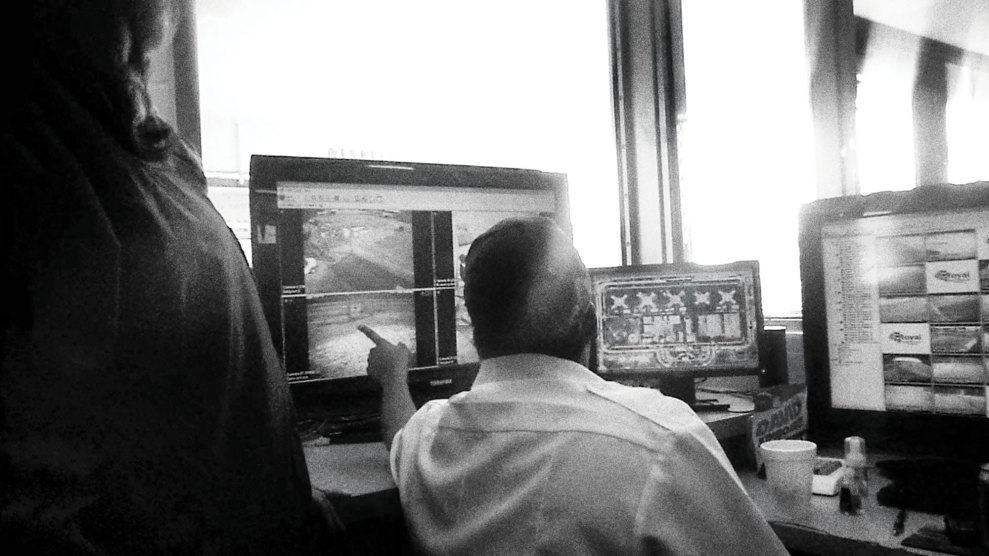 Read Mother Jones reporter Shane Bauer’s firsthand account of his four months spent working as a guard at a corporate-run prison in Louisiana.

In 1887, a 23-year-old journalist got herself checked into the Women’s Lunatic Asylum on Blackwell’s Island in New York City. When she emerged, she wrote about patients tied together with ropes, abusive staff and ubiquitous vermin, “lunatics” treated with nothing more restorative than ice baths, and, perhaps most disturbingly, patients who seemed to be perfectly sane, dumped there by a society that had few safety nets for women who were single, poor, and often immigrants.

Serialized by Joseph Pulitzer’s New York World, Nellie Bly’s accounts (later collected in a book called Ten Days in a Mad-House) caused a sensation, fueled in no small part by her pluck—she’d begun her career by writing a scathing rebuttal to an editorial titled “What Girls Are Good For”—though her ingénue looks couldn’t have hurt, either. But despite prose that shades purple to today’s ears, Bly’s work holds up not only for its daring, but for its impact: It prompted a grand jury investigation that led to changes she’d proposed, including a $26 million (in today’s dollars) increase to the budget of the city’s Department of Public Charities and Correction and regulations to ensure that only the seriously mentally ill were committed.

Access to prisons has been vastly curtailed. There is no way to know what truly happens inside but to go there.

Bly—who’d go on to get herself arrested so she could investigate conditions at a women’s prison, and to best Jules Verne’s fictional protagonist by circumnavigating the world in 72 days—was not the first journalist to go inside an institution to expose its inner workings. Or the last. Ted Conover also reported from behind prison walls, as did Ben Bagdikian, for whom MoJo’s fellowship program is named. In 1961, John Howard Griffin ingested a chemical that darkened his skin to investigate racial apartheid in the United States. Barbara Ehrenreich took jobs at chain restaurants and Walmart to spotlight the plight of low-wage workers. Mac McClelland worked as a picker in a warehouse of an online shipping behemoth to report for Mother Jones.

But while such investigations were commonplace in the muckraker era, they’ve grown increasingly rare. Why? First, there’s a real concern over ethics. When is it okay for reporters to not announce themselves as such? There’s no governing body of journalism, but a checklist written by Poynter ethicist Bob Steele provides guidelines for assessing when this kind of reporting is acceptable. I’ll paraphrase:

To see what private prisons are really like, Shane Bauer applied for a job with the Corrections Corporation of America. He used his own name and Social Security number, and he noted his employment with the Foundation for National Progress, the publisher of Mother Jones. He did not lie. He spent four months as a guard at a CCA-run Louisiana prison, and then we spent 14 more months reporting and fact-checking.

We took these extraordinary steps because press access to prisons and jails has been vastly curtailed in recent decades, even as inmates have seen their ability to sue prisons—often the only way potential abuses would pop up on the radar of news organizations or advocates—dramatically reduced. There is no other way to know what truly happens inside but to go there.

But here’s the other reason investigations like this one have grown so rare: litigation. When ABC News busted Food Lion for repackaging spoiled meat for sale back in 1992, a jury bought the company’s line that the real offense had been the falsification of employment applications and the reporters’ failure to fulfill their assigned duties—i.e., repackaging spoiled meat! The $5.5 million damage award was eventually knocked down to just two dollars, but it put a chill on this kind of muckraking for a generation, and during that time, corporate and official entities built an ever-tighter web of legal protections. Nondisclosure agreements—once mainly the provenance of people who work on Apple product launches and Beyoncé videos—are now seeping into jobs of all stripes, where they commingle with various other “non-disparagement” clauses and “employer protection statutes.” Somewhere along the way, employers’ legitimate interest in protecting hard-won trade secrets has turned into an all-purpose tool for shutting down public scrutiny—even when the organizations involved are more powerful than agencies of government.

Companies’ interest in protecting trade secrets has turned into a tool for shutting down public scrutiny.

Or when, for that matter, they replace the government. When CCA (which runs 61 prisons, jails, and detention centers on behalf of US taxpayers) learned about our investigation, it sent us a four-page letter warning that Shane had “knowingly and deliberately breached his duty to CCA by violating its policies,” and that there could be all manner of legal consequences. The letter came not from CCA’s in-house counsel, but from the same law firm that had represented a billionaire megadonor in his three-year quest to punish us for reporting on his anti-LGBT activities. When he lost, he pledged $1 million to support others who might want to sue us, and, though we won the case, were it not for the support of our readers the out-of-pocket costs would have hobbled us.

Shane’s story will draw a fair bit of curiosity around the newsgathering methods employed. But don’t let anyone distract you from the story itself. Because the story itself is revealing as hell.

If you think stories like this need to be told, please make a tax-deductible donation to Mother Jones to help underwrite our investigations.