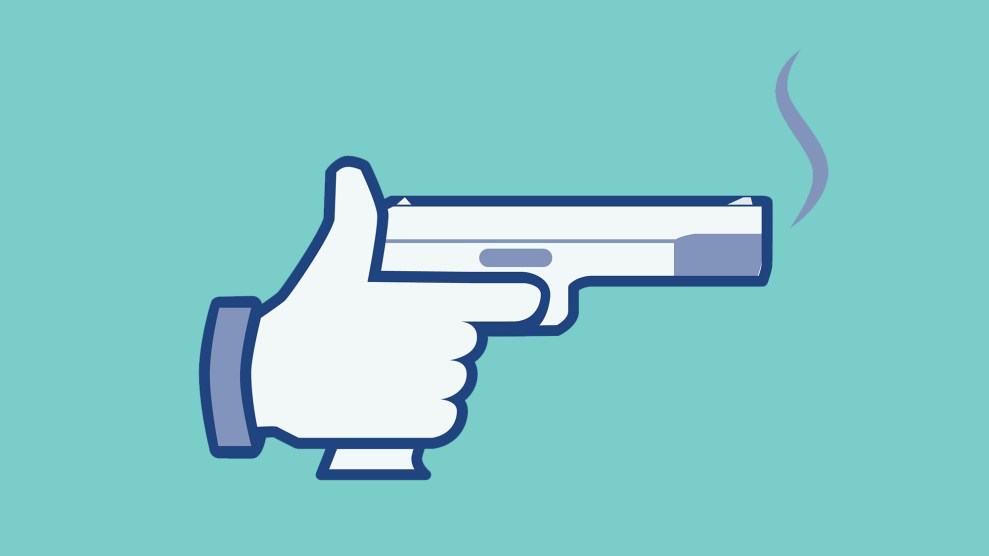 “Friends, I need your help,” Greg Evers wrote to his Facebook followers last Wednesday. “Over the last 48 hours as I have taken on Washington and the liberal Obama/Clinton policies of Gun Control I have become the target of a well organized liberal machine.” He implored his supporters, “I need your help combating those who would tear our constitution to shreds.”

Evers, a Republican candidate for Congress from Florida, had just launched the “Homeland Defender Giveaway” on his Facebook campaign page, offering an AR-15 rifle to one randomly chosen resident of his district. The gun, similar to the assault rifle recently used to kill 49 people at a gay club in Orlando, Florida, “proudly displays the 2nd amendment [sic] on the right side of the receiver,” read a press release from the Evers campaign.

Evers didn’t get the response he was expecting. The “well organized liberal machine” he referred to is the disparate collection of individuals who have taken it upon themselves to flood Facebook with reports of suspected gun sales and get the site to take down posts promoting unlicensed firearms transactions. Several of them took issue with Evers’ AR-15 giveaway, seeing it as callous move in the wake of the Orlando massacre.

“I want it to be hard to get a gun. I’m opposed to how easy it is to take out 50 people in a two-minute period. And I’m pissed off at how little our government has done about it,” says Mike Monteiro, a web design director in San Francisco whose Twitter feed has become a repository for his and others’ handiwork in getting groups where guns are sold kicked off of Facebook for violating the site’s rules. He estimates that he and his “army of little miscreants” have gotten at least 400 groups banned.

“We found something simple that we could do,” Monteiro says. “I don’t know how big of an effect it’s having. Probably very fucking little, but it’s at least something.” He is unapologetic about reporting Evers to Facebook. “He was offering a free AR-15,” he notes. “I love that we pissed off some Congressman. I hope we ruined his dinner.”

In January, when Facebook banned private sales of guns and ammunition, it was assumed buying a gun on the site would become significantly more difficult. For years the social network had unintentionally facilitated unregulated weapons sales. (There were some limits. In 2014, Facebook restricted posts discussing firearms sales to users over 18 and warned sellers to abide by state and federal laws.) Now, six months after the ban went into effect, it’s clear that Facebook continues to host a bustling arms marketplace, where everything from handguns to rifles are easy to procure, often without a background check.

The anti-gun Facebook vigilantes readily recount their scores. Malachi Smith says that he’s gotten 93 groups removed, and has “30+ reports in the queue for review right now. My success rate is over 80%,” he wrote in an email. Chris Tacy has taken 74 groups down. Jough Dempsey claims 18 takedowns, including that of a group with 11,000 members. Some discuss their numbers as if they’re setting exercise records. “I have to stop for the day, but hit pers best, 48,” tweeted John Sibley, who has also written a guide to “chasing guns from Facebook.” Gun violence prevention advocates affiliated with groups like Everytown for Gun Safety have reported thousands more removals.

A few months after it implemented its gun-sale ban, Facebook rolled out a feature that makes it easier for users to report posts or pages that describe “the purchase or sale of drugs, guns or regulated products.” But enforcement of the ban is entirely reliant on user reporting. Monteiro and others recount Facebook telling them that flagged groups had not violated its community standards, only to see that determination reversed as more people reported the same groups. One group called Sell Guns for Cash was not removed after being flagged, nor was another group with posts showing images of firearms with prices on them. “When we found out that Facebook had this policy, we thought it was great. We were going to use it to get rid of this stuff. But it’s frustrating how inconsistently it’s being supported,” says Monteiro.

Facebook is erratic in following its own guidelines. Yesterday I was told 9 groups with “gun sales” in the name were within guidelines.

Overzealous gun-group flaggers sometimes hit the wrong targets. The gun-sale ban only affects sales between individuals, not sales by federally licensed firearms dealers. But Facebook has no way of vetting licensed gun sellers. According to Monteiro, pages for brick-and-mortar gun shops have been taken down wrongfully at times.

Gun-selling Facebook groups have found ways to circumvent the site’s restrictions. In March, Forbes reporter Matt Drange found that some groups were becoming private to avoid scrutiny. Others switched from “closed” to “secret,” a status that’s all but invisible to users not already in the group or invited by current members. Some sellers use codes when listing weapons for sale.

These workarounds may indicate something more significant than loopholes in the site’s policy. Chuck Rossi, Facebook’s director of engineering, has become an advocate for gun groups within the company and has helped reinstate gun groups. As also reported by Drange at Forbes, some of the groups Rossi has helped rescued from removal have continued to be forums for private gun deals. Rossi also became the leader of a secret group of administrators for gun pages called “Admin Contact.” According to Forbes, in February Rossi wrote to the group’s members: “I am 100% laser focused on getting your groups back to you so you have a chance to get them to comply with the new policy. It is my sole freaking purpose in life until it is done.” His efforts have helped many groups get out of what’s known as “Facebook jail.”

In a statement to Mother Jones, a Facebook spokesperson emphasized that “The purchase, sale or trade of firearms, ammunition and explosives between private individuals isn’t allowed on Facebook… When a reported post violates Facebook’s policies, that post will be removed, however the group it appeared in will not necessarily be taken down.”

“I report these sites because I’m really, really, really fucking angry. Why isn’t Facebook policing their backyard?” says one flagger, who wishes to remain anonymous. “Why is it still so easy to get a gun? Why can they sell and swap in the open using dirty loopholes? It was maddening to see people pricing, bargaining, and exchanging weapons in the open. The goal of this was to do something—anything.”