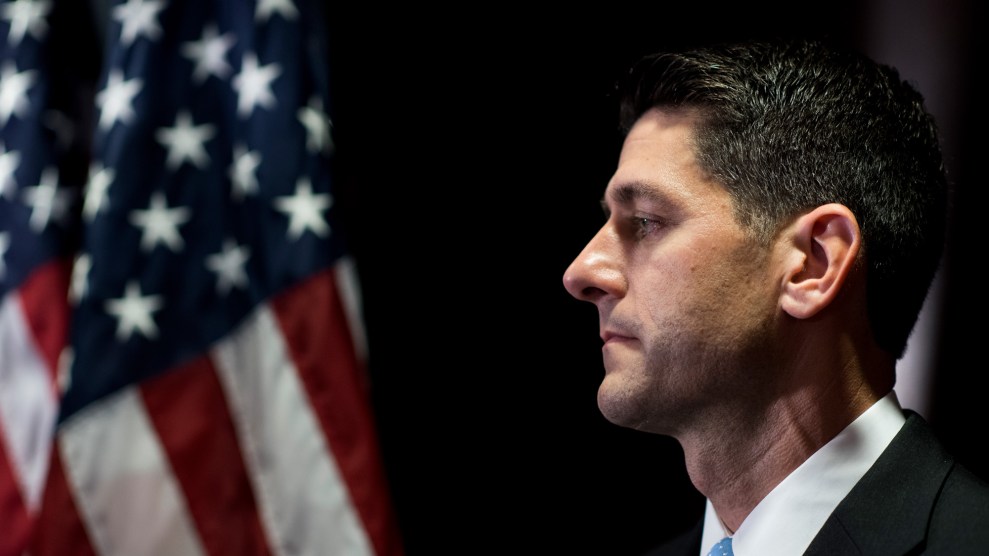 House Republicans rolled out a roadmap for tax reform Friday that drastically cuts corporate taxes and benefits high-income taxpayers—but not nearly as much as the plan proffered by the party’s presumptive presidential nominee, Donald Trump.

House Speaker Paul Ryan unveiled the GOP proposal—the sixth and final policy blueprint that the House GOP has issued this month under Ryan’s direction—at a news conference in Washington. The plan would slash corporate rates from the current 35 percent to 20 percent and lower the top individual rate from 39.6 to 33 percent. (Trump has proposed cuts to 15 and 25 percent, respectively.) The blueprint also eliminates the estate tax, long a target of Republicans in Congress, and lowers the tax rate on income from investments.

“The way I’d sum it up is: We want a tax code that works for the taxpayers—not the tax collectors,” Ryan said. “We want to make it simpler, flatter, fairer…Make it so simple that the average American can do their taxes on a postcard.”

Since taking the House in 2011, Republicans have repeatedly promised to overhaul the tax system, which hasn’t seen a major update since 1986. But they have stumbled over a political roadblock: Every major deduction or tax credit has a devoted constituency who would be enraged were it to be eliminated. The last comprehensive Republican proposal was submitted in 2014 by retired Rep. Dave Camp (R-Mich.), former chairman of the House Ways and Means Committee. His scheme varied significantly from the new blueprint. It lowered the corporate rate to 25 percent rather than 20 percent and cut the top individual rate just to 35 percent, while at the same time sacrificing popular deductions on charitable giving and mortgage interest. It failed to attract much support within the party and never received a vote.

The new blueprint is more circumspect, maintaining the mortgage and charitable deductions, as well as the Earned Income Tax Credit, a key poverty-fighting tool, and a deduction for spending on higher education. It leaves it to the Ways and Means Committee to reform these programs. Otherwise, the plan makes an effort to simplify the system, replacing itemized deductions with a higher standard deduction and eliminating most business tax breaks. It also reduces the number of income tax brackets from seven to three.

It is not yet clear whether the plan would add to the deficit. But as Howard Gleckman of the nonpartisan Tax Policy Center writes, “It is hard to imagine how these tax cuts could pay for themselves.” The House GOP’s scheme is bound to cost less than Trump’s tax cuts. Experts estimate that the presumptive nominee’s plan would shrink revenues by $9.2 trillion over 10 years, forcing draconian cuts in government spending.