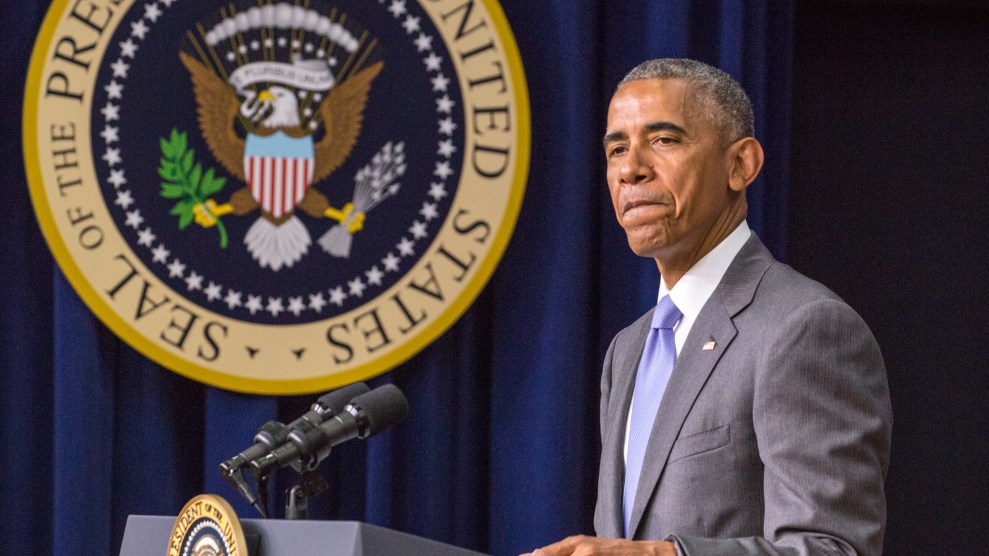 On Thursday, the Supreme Court dealt a major blow to President Barack Obama’s effort to shield some undocumented immigrants from deportation. Before a half-empty courtroom, the court issued a one-page decision announcing its 4-4 deadlock that upholds the 5th Circuit Court of Appeals’ November decision to block implementation of Obama’s executive action on immigration.

Obama’s order would have granted relief from deportation to about 4 million immigrants, largely the parents of American citizen children. It wouldn’t have given them a path to citizenship, but it would have given them the right to apply for work authorization and to participate in the Social Security system while deeming them low-priority targets for deportation.

The massive impact of the decision in US v. Texas wasn’t reflected in its anti-climactic release. The court dedicated most of the morning to a controversial affirmative-action case, Fisher v. University of Texas, in which Justice Samuel Alito read aloud his testy dissent to the court’s surprise ruling upholding the university’s race-based admissions program. After Alito finished, Chief Justice John Roberts casually declared that the lower court decision in the immigration case would be affirmed, and without further explanation, he banged the gavel and thus dashed the hopes of millions of immigrant families.

Thursday’s decision doesn’t hold any precedent beyond the 5th Circuit, since the justices did not reach a majority ruling. The immigration case had put the justices in a jam in ways that went far beyond immigration. One of the questions to be resolved in the case was whether Texas had the right to bring this case in the first place, an issue known as standing. For a party to bring such a challenge to a federal action, it needs to show that it has been injured in some meaningful way. Texas was a long way from proving that it had been injured, and if it had prevailed in a more meaningful decision, the court might have opened the flood gates to all sorts of litigation from states opposed to federal regulations and actions. During oral arguments in the case in April, then-Solicitor General Donald Verrilli had warned the justices that granting standing to Texas could do exactly what the country’s founders wanted to avoid: shift tremendous political power into the hands of a few unelected judges, who’d be forced to adjudicate all these new claims.

The judge in the immigration case showed the dangers of such a scenario. Texas filed the suit in Brownsville, Texas, in the hopes of landing a federal trial court judge there known to be hostile to immigration. It succeeded in the form of US District Court Judge Andrew Hanen, a strident critic of the Obama administration’s immigration policy. Hanen demanded that Justice Department lawyers take ethics classes and tried to force the administration to turn over personal information about 100,000 undocumented immigrants who’d previously been granted a reprieve from deportation. In describing Hanen’s anti-immigration background, the New York Times noted that in 2013, he’d made news “with a politically charged ruling accusing the Obama administration of criminally conspiring with Mexican drug cartels to smuggle children over the border, which is surely why the plaintiffs like their chances.”

Hanen paved the way for Thursday’s Supreme Court opinion by accepting Texas’ very unusual argument that Obama’s immigration order would injure the state by forcing it to give driver’s licenses to additional undocumented immigrants. The Obama administration argued that Texas voluntarily gives undocumented immigrants driver’s licenses, so it could hardly call the issue an injury. The state could simply decide not to give out the licenses if it wanted to. Nonetheless, Hanen blocked Obama’s order, and the 5th Circuit sided with him.

By issuing a limited ruling on Thursday, the Supreme Court dodged the broader issues at play in the case. That move returns the immigration controversy to the political arena, where Congress could again tackle federal immigration reform or a new president could select a ninth justice, following the death of Justice Antonin Scalia in February, to break the deadlock in a future immigration case.

“The real consequences of the court’s non-decision decision aren’t legal, but practical,” says Brianne Gorod, chief counsel to the liberal Constitutional Accountability Center. “Despite the solid legal foundations for the president’s immigration initiatives, they remain blocked nationwide, leaving families across the country in limbo. It’s a real demonstration of the Court’s inability to function properly with just eight Justices and the tremendous consequences that can result.”