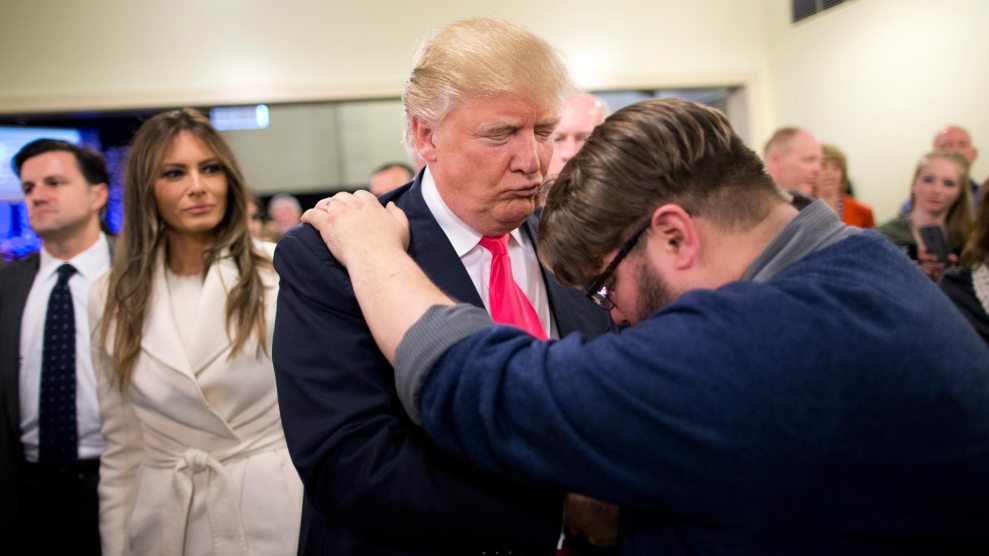 Ever since evangelical favorite Sen. Ted Cruz dropped out of the presidential race in early May, presumptive GOP nominee Donald Trump has been working hard to win over the religious right. Today, the thrice-married and formerly pro-choice business mogul furthered his efforts to shore up their support, and met with more than 1000 evangelical leaders in a closed-door session in Manhattan.

When the meeting was announced in May, only about 400 social conservative religious leaders were expected to attend. Since then, the attendance ballooned in size and significance, as major faith leaders from Christian denominations nationwide, as well as representatives of social conservative issue groups that focus on abortion, religious liberty, and more, signed on to participate. Ben Carson opened the meeting with a discussion of unity, televangelist Franklin Graham offered an opening prayer, and former Arkansas Gov. Mike Huckabee moderated a 90 minute question-and answer-session in front of the crowd. Trump responded to pre-selected questions about his positions on marriage, abortion, and religious liberty, as well as Republican policy mainstays like Israel policy and national security.

At the meeting, Trump once more spoke about the so-called “war on Christmas,” lamenting that department stores such as Macy’s don’t display any Christmas ads and promising that, in a Trump presidency “boy do I mean it, we’re going to be saying ‘Merry Christmas’ again.” Trump also warned that Hillary Clinton would be even worse for evangelicals than Obama. “All of your leaders are selling Christianity down the tubes,” Trump said. “It’s a very, very bad thing that is happening.”

Also attending were a number of onetime Trump objectors: In the wake of the Iowa caucuses last February, Marjorie Dannenfelser, the head of the anti-abortion Susan B. Anthony list, wrote that she was “disgusted” by Trump’s treatment of women. After he became the presumptive nominee in early May, she flipped her position, writing an op-ed for conservative news site Townhall.com titled “The Pro-Life Case for Trump.” On Tuesday, she and other anti-abortion leaders had a private meeting with him before the main Q&A session. In an email to supporters on Tuesday afternoon, Dannenfelser recounted that “Mr. Trump was very generous with his time,” and that she was encouraged by his statement at the meeting reaffirming his commitment to appoint pro-life justices to the Supreme Court.

Focus on the Family’s founder James Dobson was one of the few slated to ask Trump a pre-screened question: his was about religious liberty. Dobson previously endorsed Ted Cruz for president and made robocalls to voters. In a television ad released in February, ahead of critical early primary elections, Dobson said that after Trump’s statement that he would accept the Supreme Court’s ruling legalizing same sex marriage, “We knew we could not support him.”

The meeting was also brimming with other religious leaders who had been Ted Cruz supporters, such as Penny Nance, the head of conservative Christian group Concerned Women for America, brother entrepreneurs and anti-LGBT activists from North Carolina David and Jason Benham, and Tony Perkins, president of the conservative Family Research Council. Perkins chaired, and the Benham brothers were members of the Cruz campaign’s religious liberty advisory council. Another former member, Kelly Shackleford, president of the First Liberty Law Institute, a law firm that represents conservative causes, was also at the meeting. He told Time that he planned to ask a question about religious freedom and judicial nominations.

But there is a sizeable contingent of religious leaders who still oppose Trump’s candidacy: Russell Moore, head of the Ethics and Religious Liberty Commission of the Southern Baptist Convention, tweeted criticisms of Trump throughout the day. In May, he wrote an op-ed in the New York Times decrying Trump’s bigotry, earning a direct rebuke from the presumptive nominee on Twitter and the ire of many Trump supporters. Rev. Rob Schenck, president of the evangelical group Faith and Action, also took to Twitter today to warn evangelicals in the New York meeting about Trump: “Trump=Danger,” he wrote. Outside the meeting at the Marriott Marquis, a group of faith leaders from different religions gathered to protest, calling out their support for Muslims, people of color, and the LGBT community, and holding signs that read, “Jesus Doesn’t Build Walls,” “Refugees Welcome,” and “Jews Reject Trump” with the hashtag #We’veSeenThisBefore.

During the meeting, Trump’s campaign also announced the formation of an Evangelical Executive Advisory Board. Its members will include former Rep. Michele Bachmann, Dobson, Jerry Falwell, the president of Liberty University, and televangelist Kenneth Copeland—who said in February that God had anointed Ted Cruz to be the next president.