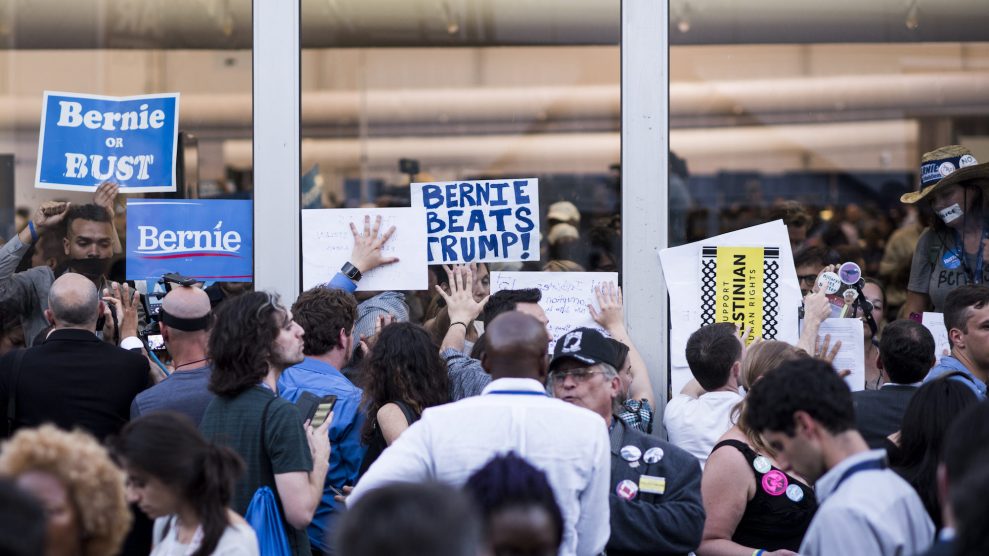 Bernie Sanders delegates and supporters stage a walk-out and protest at the media tents outside the Democratic National Convention in Philadelphia on Tuesday.Bill Clark/ZUMA

At a press conference held on Tuesday by the Bernie Delegates Network, an outfit independent of the Sanders campaign, none of the speakers indicated they had any knowledge that dozens of Sanders delegates later that day would walk out of the convention, stage a sit-in in the media workspace, and join a protest mounted by Sanders supporters outside the Wells Fargo Center. On Wednesday morning, Karen Bernal, a Sanders delegate who co-chairs the large and boisterous Sanders delegation from California, explained how that demonstration transpired. It was an organic action, with Sanders delegates deciding spontaneously to express their discontentment with a dramatic gesture. The protest signaled that some Sanders delegates were not looking for unity and had rejected Sanders’ request that his delegates not stage such actions during the convention. The message from these delegates to Sanders: You’re not the boss of me.

At the Wednesday morning briefing conducted by the Bernie Delegate Network, it was clear that Sanders was not in full control of his delegates. The group noted that the previous day, it had polled the 1,846 Sanders delegates on two questions. The first query: Did listening to the speakers on the first night of the convention (which included Sanders, who made a strong pitch for Hillary Clinton) make you more or less enthusiastic about the Clinton-Tim Kaine ticket? Of the 311 delegates who responded, only one-fifth said the night had juiced them up. Fifty-five percent said they were less enthusiastic. The second question: How much had Sanders’ message—work for Clinton in order to stop Donald Trump and don’t disrupt the convention—influenced you? Of the 276 who responded to that query, 43 percent said considerably, 30 percent replied somewhat, and 27 percent said that Sanders’ request had no influence on them.

Put that all together and here’s the picture: There is a noisy and substantial portion—perhaps a minority—of Sanders delegates who do not want to go quietly into the good night of a Hillary-Rah-Rah convention. And they’re not listening to the guy who brought them—or whom they brought—to the party.

A pro-Clinton convention/infomercial is just too hard for these delegates to swallow. “They’re accustomed to healthy granola,” said Norman Solomon, a coordinator of the Bernie Delegates Network, “and they get into the convention and they hear puffy white bread. It’s a shock to their system.” It certainly did not ease any of their concerns, he pointed out, that Virginia Gov. Terry McAuliffe, a longtime pal of the Clintons, said on Tuesday night that he was sure that Hillary Clinton would reconsider her opposition to the Trans-Pacific Partnership trade deal if she were to become president. As Solomon noted, his group’s survey of Sanders delegates found that the opposing the TPP is their paramount issue.

Speaking at the Bernie Delegate Network, Bernal explained that the Sanders delegates spoiling for a fight—or a protest—at the convention are beyond Sanders’ control and are not an organized force. “No one organized yesterday’s quiet walk-out,” she said. “It was Occupy-style…It came together very organically in the most old-fashioned way. People were talking to one another.”

Bernal excoriated the Democratic establishment for not making room for the Sanders dissidents. “If you don’t allow for the space for that type of dissent within the party, you basically say we don’t have a place for you in the party,” she said. As a leader of the California Sanders delegation, she added, she could not rein in the protesters even if she wanted to (which she does not). “It is not a top-down affair,” she said. “We feel that we are not willing to go along with being extras in a scripted production.”

The delegates who walked, she said, were upset by the Kaine pick and remain angry about numerous slights directed at the Sanders crowd by the Democratic powers that be. “We’re still fighting an establishment orthodoxy we have pledged to fight against,” Bernal explained. “This is our one shot of doing that. We’re doing what we were elected to do.”

Solomon and Bernal both said they accept Sanders’ analysis that Trump must be defeated and that means Sanders people should support Clinton. Asked whether walk-outs and protests during the convention are in sync with this mission of thwarting Trump, Bernal responded with a long explanation about how the Democratic Party must respect and incorporate the Sanders wing:

It is a big experiment. The Democratic Party is being tested with our actions on how they will respond…We don’t start out with a plan of agreement. If you’re negotiating with an adversary…you don’t start out with below your bottom line…If they don’t provide that kind of space, the rank-and-file Bernie delegates say there is no place in this party for me.

Sanders has declared that he and his delegates did succeed in winning victories during the deliberations over the party platform and the party rules governing future presidential contests. Yet Bernal said she and other delegates were still upset that they lost platform fights on several matters: fracking, single-payer health care, TPP, and Middle East policy. And she was not satisfied with the rules change that will diminish the influence of superdelegates in future elections. She explained passionately that it was hard for many Sanders delegates to sit through the roll-call vote the previous night that included superdelegate votes that heavily favored Clinton and “skewed” the overall count. The roll call, she said, “spat in the faces” of the Sanders delegates.

Repeatedly, Bernal noted that a slice of Sanders delegates will not heed Sanders. “Sanders has a job to do,” she said. “He’s in a difficult position. We have a different job.” But, she added, she thinks that Sanders is actually delighted to see delegates upset the order of the convention. “I have to believe that deep down, secretly, he’s happy about some things,” she said. He had the motto during the campaign: ‘Not me, us.’ And some of the Bernie delegates have taken this to heart.”

A reporter asked Bernal if Sanders had started a fire that he no longer controls. She quickly replied, “He was never in control of it.” She then added, “We haven’t gotten much instruction from the Sanders campaign at all. And that silence speaks volumes.”

Yet Sanders, with his direct messages to his delegates and his speech to the convention, has been clear that he wants his base to join the party to elect Clinton. But Bernal shows that there is a band of Sanders delegates who embraced his crusade but who now believe they have a better strategy than he does. She said she had no idea what this group might do on the final nights of the convention. (Will they disrupt Kaine’s address on Wednesday night? There could be disorder. Or maybe not.) Their version of the Bernie revolution is not organized at this moment. The Sanders campaign empowered them, and now they are using that power on their own.