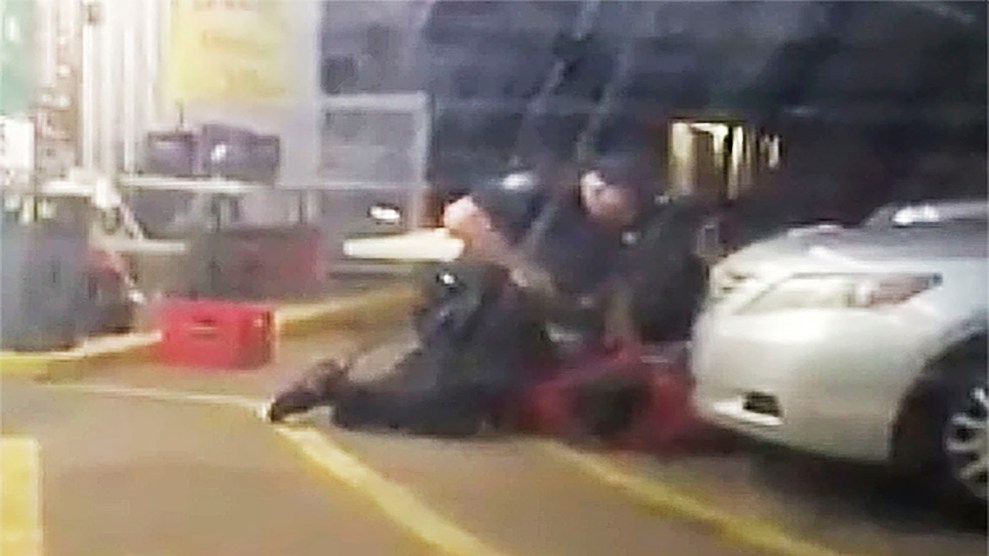 An Atlanta man who was arrested after being the first to widely share a viral video of a man being killed by the police in Baton Rouge, Louisiana, claims he was detained in retaliation for distributing the recording.

Chris LeDay, a 34-year-old Air Force veteran, did not film the video of Alton Sterling, a husband and father of five who was shot by police outside a Louisiana convenience store last Tuesday. But LeDay used to live in Baton Rouge, and he posted the video—which he says he got from a friend of the videographer—on July 5 after Sterling’s death. “I wanted to share it a zillion times and make sure everyone saw it,” LeDay told Mother Jones via phone. “The police were already saying their body cameras had fallen off.”

The next day, LeDay was detained by military security while going through a routine checkpoint for his job at Dobbins Air Reserve Base, a security procedure he told Mother Jones he had been through “at least 15 times” without issue. Military officers handcuffed LeDay, a black man, and told him that he met the description of someone wanted for assault and battery. Shortly afterward, officers from the nearby Dunwoody Police Department took LeDay in handcuffs and leg shackles to Dekalb County Jail.

In jail, LeDay was booked on a charge of “failure to appear.” According to LeDay, it wasn’t until he was in transit to Dekalb that he was told he’d actually been arrested over an unpaid traffic infraction, the result of an outstanding ticket issued in July 2014. That earlier citation involved driving on a suspended license, as well as vehicle registration and improper headlights charges. According to Dunwoody PD, a judge had issued a warrant for his arrest two summers ago after LeDay failed to pay the sum. All told, LeDay spent 26 hours in jail and was released July 7 after paying $1,231 in fines.

The spokesperson at Dobbins told Mother Jones that the base had in June signed off on a base pass for LeDay, who had started working there as a ground technician about a month before his arrest. The spokesperson said the open warrant was found during an additional screening of several contractor pass applications on July 6, and that base security notified Dunwoody PD and agreed to detain LeDay the next time he came to work.

The Dunwoody Police Department confirmed that timeline but said LeDay’s arrest was unrelated to the Facebook post. “If Mr. LeDay had paid his fines or appeared in Court and settled the matter approximately two years ago, a warrant for Failure to Appear would not have been issued and Mr. LeDay would not have been arrested on these charges,” according to Mark Stevens, Dunwoody’s public information officer. Dunwoody PD deny that the assault and battery charge was ever alleged, but Captain Meredith Kirchoff, chief of public affairs at Dobbins, told Mother Jones via email that there was indeed “a note of a previous battery charge” on the open warrant. LeDay says he’s never been arrested or charged with battery.

LeDay still believes the police action was a retaliatory measure intended to embarrass him and threaten his job security. Since the arrest, LeDay says his manager has asked him not to come into work. “It’s still up in the air,” said LeDay. Despite attempts to clarify his legal status, he is unsure if he will be allowed to return in the future. “I’d like to have my job back, but at this point I’m losing wages and my reputation is being questioned.”

LeDay’s claims raise parallels to Ramsey Orta, who recorded Eric Garner’s death in July 2014, after New York City police placed Garner in a headlock during a confrontation over sidewalk cigarette sales. Orta, 24, claims he has been subject to persistent police mistreatment since Garner’s death and recently entered pleas on multiple drug and weapons charges stemming from three separate arrests since August 2014. He has been described as the only person at the scene of Garner’s killing to be charged with a crime.