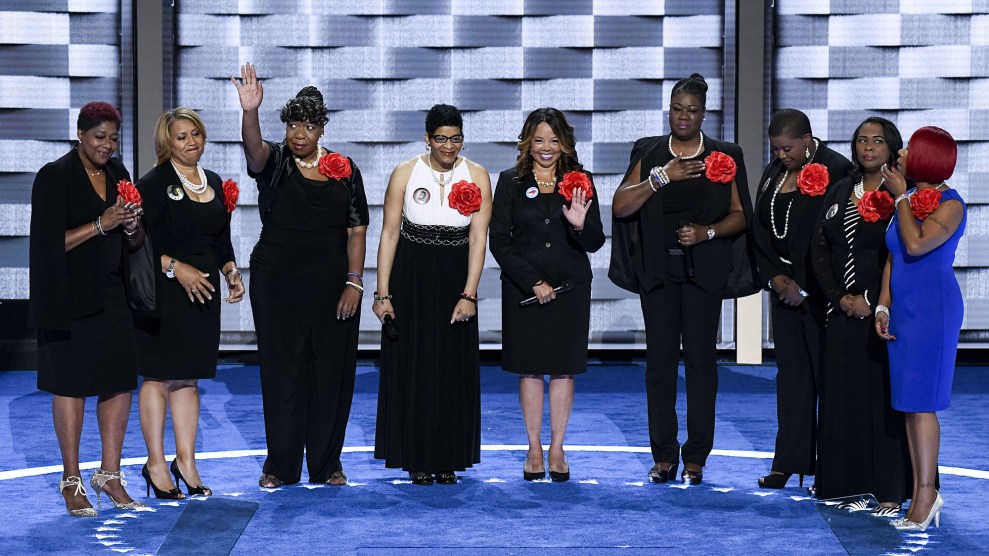 On Tuesday night, members of Mothers of the Movement, mothers who lost children because of gun violence or police action, spoke at the Democratic National Convention. The women have become featured surrogates for the Hillary Clinton campaign in recent months, appearing with her at events and in campaign ads to discuss gun violence and the excessive use of force by law enforcement. But their appearance caused a backlash from conservatives and the law enforcement community who charged that the Democrats had ignored the sacrifices of law enforcement officers.

Last week, after an initial speakers lineup was released, the Philadelphia Fraternal Order of Police slammed Clinton and the DNC for “excluding the widows, and other family members of Police Officers killed in the line of duty who were victims of explicit, and not implied racism and ‘being on duty in blue,'” the group said in a statement.

The Clinton campaign responded by noting that Joe Sweeney, a 9/11 first responder and former NYPD detective, and Charles Ramsey, the former commissioner of the Philadelphia Police Department, had speaking roles at the convention, but acknowledged that no formal tribute had been planned. A Politico story published July 15 but then updated on the Monday of the convention made no mention of a tribute to fallen officers, although it did list Sweeney and Ramsey. But when the speaking lineup for the final night of the convention was announced Thursday morning, it included an item titled “Stronger Together: Tribute to Fallen Law Enforcement Officers.”

A source familiar with convention programming told Mother Jones Thursday afternoon that a tribute similar to the one for Thursday night was always in the plan: “After Dallas, Hillary Clinton gave a speech at AME here in Philadelphia where she sought to bring the country together, and asked everyone to walk in each other’s shoes, and that message was always intended to be brought to the stage in Philadelphia.”

The DNC was criticized by conservatives for giving a prime-time spot to Mothers of the Movement, an organization that includes the mothers of Trayvon Martin, Sandra Bland, and Michael Brown. They were featured in a video that focused on Clinton’s support of the families who’ve lost loved ones to police violence. The women called for respect between officers and the black community. Sabrina Fulton, the mother of Trayvon Martin, praised Clinton’s ideas for “common-sense gun legislation” and a “plan to repair the divide that so often exists between law enforcement and the communities they serve,” according to the Los Angeles Times.

The next day, Ron Hosko, a former assistant director of the FBI and now president of the Law Enforcement Legal Defense Fund, in an op-ed in USA Today blasted the decision to showcase the mothers: “As Hillary Clinton and Democratic convention leaders pander for every last vote, leveraging the flawed imagery and rhetoric of Mothers of the Movement and Black Lives Matter, they disregard and disrespect the sacrifice of our law enforcement officers, who disproportionately apply their resources to neighborhoods and communities that are stricken by the ravages of drugs, gangs, violent crime and despair.”