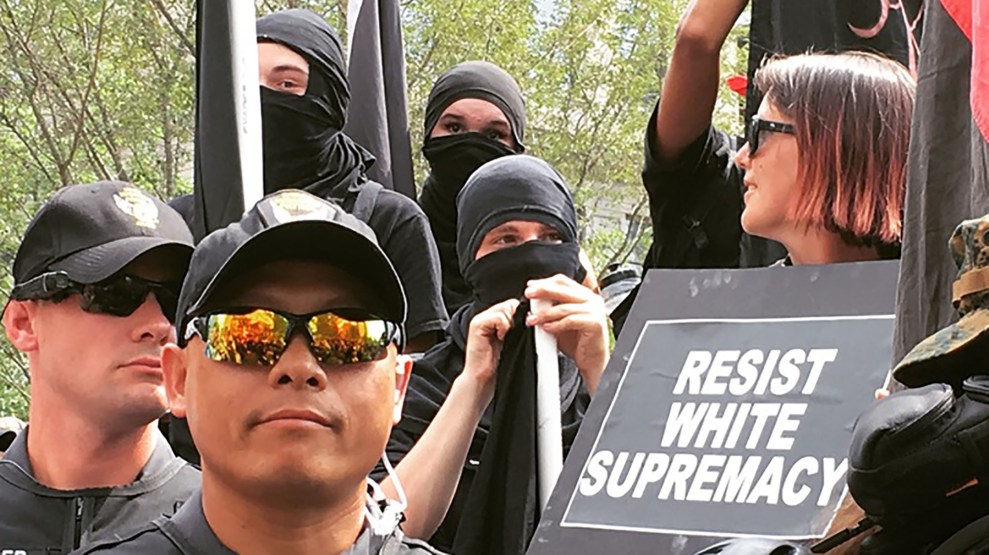 There has already been more sustained protest activity in Philadelphia on the first day of the Democratic convention than there was during the entire Republican convention in Cleveland last week. Hundreds marched through blistering heat in downtown Philly on Sunday afternoon, and hundreds more marched Monday morning in favor of immigration reform and in support of Bernie Sanders. In Cleveland, despite predictions of greater unrest, no more than a couple of hundred protesters marched at any given time, and only 24 were arrested.

Perhaps the relative quiet in Cleveland was because of the overwhelming police presence there, or because estimates that “thousands” would protest at the Republican National Convention were wildly inflated—or both. But an additional factor could be that before and during the convention, the FBI intervened to make sure that any potential rabble-rousers remained quiet.

In late June, Mother Jones reported that FBI agents had stopped by the homes of several local Black Lives Matter and Occupy Cleveland activists to ask about their plans for the RNC. An FBI spokesperson told a Cleveland newspaper that the agents were conducting “community outreach as part of their security planning.” Activists in other cities who have been prominent in speaking out against police killings of African Americans told the Washington Post that they had been visited as well.

The FBI apparently continued to call upon activists throughout the week of the RNC. Last Wednesday, the Ohio chapter of the National Lawyers Guild released a statement claiming that eight special agents from the FBI, with officers from a metro Cleveland police department, “raided a home without consent or presenting a warrant.” The NLG said the raid appeared to be “part of a series of raids conducted” that morning.

When asked if the FBI activity had possibly quashed protests at the RNC, Jacqueline Green, co-coordinator of the NLG Ohio chapter and a Cleveland area civil rights and criminal defense attorney, replied, “I certainly think it had an effect.” She noted that some reports to the NLG included law enforcement telling people not to go downtown to protest. An FBI spokesperson told Mother Jones that the agency never told participants not to go downtown.

Video has surfaced on YouTube of one of the raids that apparently took place on July 20, showing what appear to be FBI agents, Elyria Police, and Homeland Security investigators entering a home and forcing the occupants outside in their underwear:

“We can get a search warrant for this place if you want to,” one of the law enforcement officers said (at 4:41 in the video). One of the men in the video was Rod Webber, a peace activist who had tried to calm tensions during the more heated debates in downtown Cleveland outside the RNC by offering everybody flowers.

Here’s another view from that same interaction captured on the front porch of the house:

Special Agent Vicki Anderson, a spokeswoman for the FBI’s Cleveland field office, told Mother Jones that the FBI and other agencies were following leads from the previous day that indicated that people in that house were throwing bottles of water and “possible bottles of urine” at law enforcement officials during mild protests in downtown Cleveland. She also said they had shoved and pushed law enforcement agents.

Law enforcement entered the house as part of a “protective sweep,” she said, to make sure everybody in the house was accounted for and that any weapons in the home were secured. At least one of the men in the home said on the video that he had a gun and a concealed-carry permit; Anderson says someone else also had a weapon but “no search was conducted and no arrests were made.”

She added that she didn’t know the number of visits the FBI made to potential protesters before and during the convention and that no group had been targeted, but “numerous individuals from various groups were visited” to “encourage a safe and secure RNC event.” She explained, “We [were] speaking to numerous groups with the same purpose in mind, maintaining an environment where all can assemble peacefully and exercise their right to free speech.”

Juss, a local activist who preferred not to share her full name, told Mother Jones that she thinks the FBI came to her house because of her past activism around prison reform and the Occupy Cleveland movement. She says she didn’t talk to the agent, who left a business card in her door, but expected the visit and said it seemed like an effort to intimidate activists.

“They visited people who aren’t doing anything” and didn’t pose a threat, she said. “They really don’t know what they’re doing. They’re just wildly stabbing into the dark.”