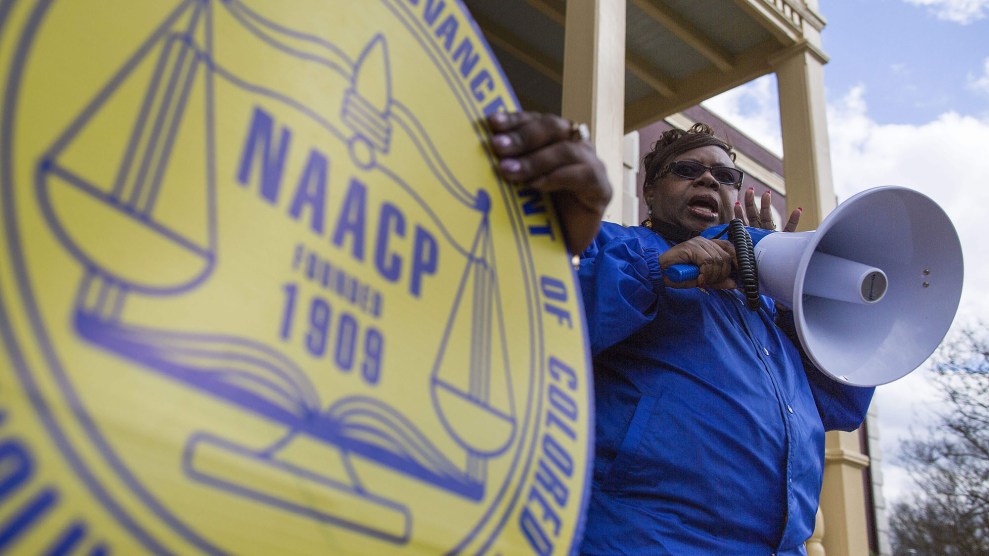 Rev. Dr. Portia Rochelle, President of the Raleigh-Apex NAACP chapter, speaks before helping lead a march as a part of the Souls to the Polls movement in March.Al Drago/Zuma

A federal appeals court struck down a restrictive voting law in North Carolina on Friday, ruling that the state legislature acted with the intent to limit African American voting in enacting the measure. The law, which took effect in March, contained provisions that created new ID requirements, eliminated same-day voter registration, reduced early voting by a week, blocked a law that allowed 16 and 17-year-olds to pre-register to vote, and prevented ballots cast in the wrong precincts from being counted.

The law, originally passed in 2013 after the US Supreme Court gutted a key section of the Voting Rights Act, was immediately challenged by a lawsuit but was upheld at the district court level in April. Friday’s decision reverses the lower court’s ruling.

“In holding that the legislature did not enact the challenged provisions with discriminatory intent, the court seems to have missed the forest in carefully surveying the many trees,” wrote Judge Diana Gribbon Motz for the unanimous three-judge panel. “This failure of perspective led the court to ignore critical facts bearing on legislative intent, including the inextricable link between race and politics in North Carolina.”

The court’s decision notes that North Carolina’s law was initiated by state Republicans the day after the Supreme Court gutted a key portion of the Voting Rights Act in 2013. That decision, Shelby v. Holder, ruled that the mechanism used to determine which states needed pre-clearance for voting law changes due to a history of racial discrimination was outdated. This ruling cleared the way for states like North Carolina—which previously had to have all voting law and procedural changes reviewed by the US Department of Justice or a federal judge—to enact any voting changes they wished.

Marc Elias, one of the lawyers who fought the law on behalf of a group of younger voters in North Carolina, told Mother Jones Friday that the decision represented a strong rebuke of race-based voting legislation.

“The Fourth Circuit decision is a milestone in the protection of voting rights,” Elias said. “It is a great day for the citizens of North Carolina and those who care about voting rights. Significantly, the court put down an important marker against discrimination in voting when it wrote, ‘We recognize that elections have consequences, but winning an election does not empower anyone in any party to engage in purposeful racial discrimination.'”

Rick Hasen, a national expert on election law, wrote Friday that the decision reversed “the largest collection of voting rollbacks contained in a single law that I could find since the 1965 passage of the Voting Rights Act.” Hasen noted that this was the third major voting rights victory of the past two weeks. On July 19, a federal court weakened Wisconsin’s strict voter ID law; the next day, a panel of federal judges ruled that Texas’ strict voter ID law violated federal law.

The state of North Carolina could now seek to have the case reheard before the entire Fourth Circuit Court of Appeals, or it could appeal the decision to the Supreme Court.