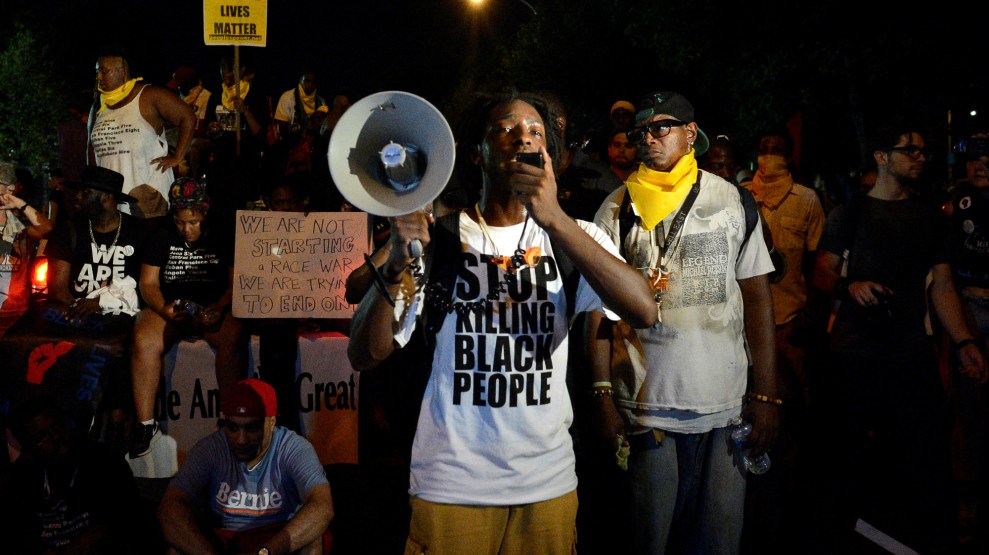 As she accepted the Democratic nomination on Thursday night, Hillary Clinton asked her audience to “put ourselves in the shoes of young black and Latino men and women who face the effects of systemic racism and are made to feel like their lives are disposable.” Coming one week after the harsh “law and order” tone struck by her opponent, Clinton’s statement was a powerful acknowledgement by a presidential candidate of the unfairness of the justice system for some minorities.

For the racial justice activists outside the Wells Fargo Arena, the feeling was different. On Tuesday, as the Black DNC Resistance March worked its way through Philadelphia, protesters chanted, “Stop killing black people,” and carried signs that said, “Hillary, Delete Yourself” and “Hillary, you’re not welcome here.” Hawk Newsome, an activist participating in the march, told USA Today, “Hillary Clinton has had a perfect opportunity in the last two or three weeks to say, ‘Hey, black lives matter to me, and here is my platform.’ She’s done nothing more than make some vague statements and tweets.”

Clinton’s racial justice platform has been a source of frustration for Black Lives Matter activists. During the Democratic primary, protesters called for the candidate to explain how she would help black communities. Clinton responded that activists needed to clearly define what they were asking for. “I believe you change laws, you change allocation of resources, you change the way systems operate,” she told a group of Black Lives Matter activists during a meeting last August. In October, Clinton met with activists from Campaign Zero, which had created a list of proposals for police reform, and she said her platform would take their concerns into account. The resulting platform did include some items on the activists’ wish list, such as the creation of a national standard for officers’ use of force and support for alternatives to incarceration, but it did not endorse Campaign Zero’s request to empower communities to hold officers accountable.

“One of the things Hillary said to us is she talked about the importance of communities being involved,” DeRay McKesson, a prominent activist and one of the Campaign Zero members at the meeting with Clinton, told BuzzFeed. “And we said, ‘Well, we don’t see that in your platform.’ Where are you giving communities any oversight or any authority?”

McKesson joined other leading figures in the Black Lives Matter movement in Philadelphia for the Democratic National Convention, but the activists have resisted openly supporting the party’s nominee. In June, Black Lives Matter co-founder Alicia Garza told Elle magazine that although she would probably cast her vote for Clinton in November, she would “absolutely not” endorse her publicly, citing the former first lady’s public support of the 1994 crime bill and the tough-on-crime policies it instituted.

Garza’s lack of enthusiasm for Clinton is not uncommon among younger black voters. When Clinton campaigned during the South Carolina primary,  she relied heavily on the Mothers of the Movement, a group of black mothers who have lost their children to gun and police violence, in an effort to shore up her support in black communities. But Erica Garner, the daughter of Eric Garner, who died at the hands of New York police in July 2014, became a prominent surrogate for the Bernie Sanders campaign. Other activists, including Garza, said they had voted for Sanders during the Democratic primary. During the convention week, Sanders supporters and racial justice activists collaborated on protests. “She’s not performing where Obama was in 2012 with African American voters primarily because of younger blacks,” one pollster told BuzzFeed. “There is no progressive majority without this key component of the Obama coalition.”

Clinton has struggled to win over black activists, but she has also faced criticism when she embraces their message. When the list of speakers for the Democratic National Convention was first announced, police unions complained that widows of officers killed in recent police shootings in Dallas and Baton Rouge, Louisiana, had been left off the program, arguing that they should have been included alongside mothers of black victims of police and gun violence. On Thursday, family members of slain police officers addressed the convention, in a segment that had not been listed on the convention schedule until the day of their appearance.

As the campaign has progressed, Clinton has increasingly invoked the message of Black Lives Matter, most notably in her acceptance speech on Thursday. So far, however, her words of support haven’t been enough to win over many of the movement’s activists.