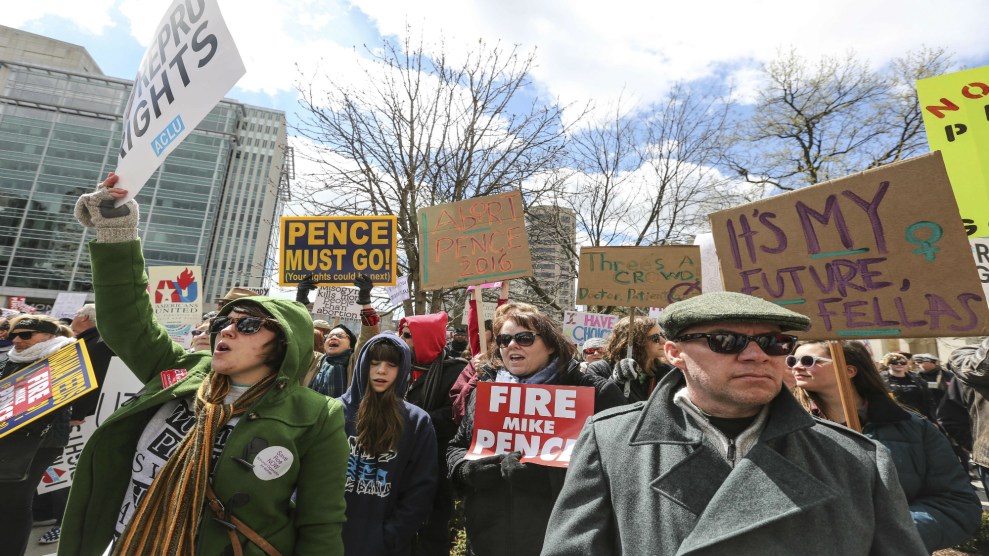 After a bruising week in the Supreme Court, abortion opponents were dealt another blow on Thursday when a federal judge blocked Indiana from enforcing a new law banning abortions motivated by the race, gender, ancestry, or disability status of the fetus.

The abortion restrictions were set to go into effect on Friday, but US District Judge Tanya Walton Pratt’s Thursday ruling resulted in a preliminary injunction that will temporarily block the law. The injunction comes after Planned Parenthood of Indiana and Kentucky and the American Civil Liberties Union sued Indiana in April, arguing that banning certain abortions and requiring women to disclose their motivations for undergoing the procedure were unconstitutional and violated women’s right to privacy.

“The State attempts to accomplish via HEA 1337 precisely what the Supreme Court has held is impermissible,” Pratt wrote in her ruling. “The State has not cited a single case where a court has recognized an exception to the Supreme Court’s categorical rule that a women can choose to have an abortion before viability…which, of course, leaves no room for the State to examine the basis or bases upon which a woman makes her choice.”

In addition to barring doctors from performing any abortions sought on the basis of “the fetus’s race, color, national origin, ancestry, sex, or diagnosis or potential diagnosis of the fetus having Down syndrome or any other disability,” Indiana’s law also required that all fetal remains be buried or cremated, a provision that would have resulted in a significant increase in costs for abortion providers in the state. Women were required to visit their abortion provider to undergo an ultrasound and listen to the fetus’ heartbeat at least 18 hours before having an abortion. The law also mandated that abortion providers have admitting privileges at local hospitals. A similar provision in Texas was struck down on Monday by the Supreme Court’s ruling in Whole Woman’s Health v. Hellerstedt.

North Dakota is the only state with a similar law, passed in 2013, which bans abortions sought due to fetal genetic abnormalities.

In March, Indiana’s move to enact new abortion restrictions drew national attention after a GOP-led majority in the Indiana General Assembly voted to pass the measure, despite objections from some legislators about the limited amount of time the bill had spent in committee. Opponents of the legislation argued that the bill had been rushed to the floor without proper vetting, a move that drew criticism even from conservative legislators with reliably anti-abortion voting records.

Indiana Gov. Mike Pence, a Republican, defended the controversial legislation after signing it into law in late March, saying it was “an important step in protecting the unborn.”

But Pratt disagreed with that assessment, saying the state does not have the power to bar women from seeking abortions before a fetus can survive outside the womb.

“Today’s decision shows Gov. Mike Pence that he cannot force his religious ideology on Hoosiers,” Betty Cockrum, president and CEO of Planned Parenthood of Indiana and Kentucky, said in a statement released shortly after the injunction was granted. “It is further compelling recognition by the courts that legislation interfering with women’s reproductive rights will not be tolerated.”

Thursday’s ruling is only temporary, however, and gives the federal court more time to decide the permanent fate of the Indiana law.