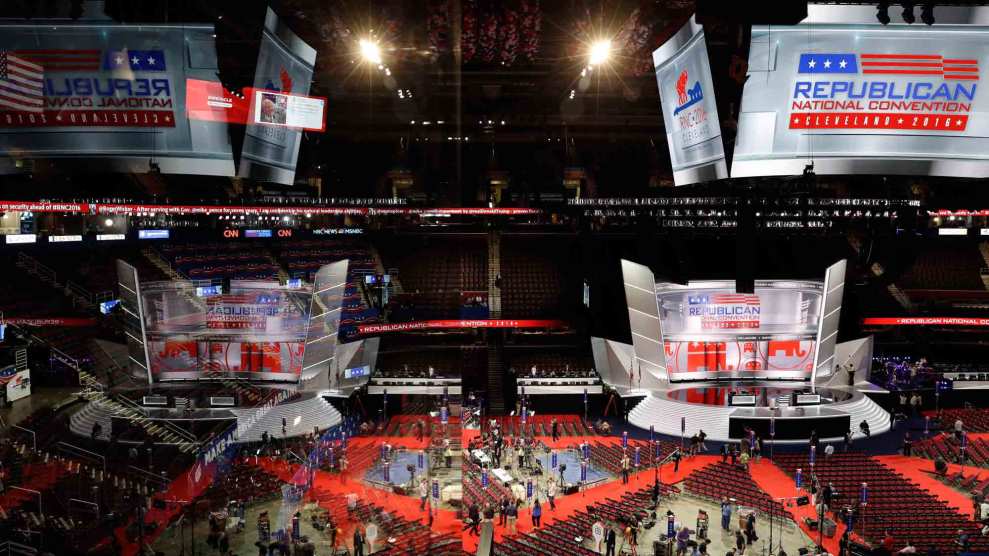 On Monday afternoon, after the Republican National Convention officially opened, a series of speeches and pre-recorded videos by popular GOP politicians publicly conveyed a unified front for the GOP. But that lasted a short while. Within hours, a last-ditch effort to defeat Donald Trump exploded into shouting and protests on the convention floor—with the Never Trump movement ultimately failing to block Trump’s path to the Republican nomination.

The final stand by Never Trump delegates focused on an effort to block the convention from adopting rules that would force anti-Trump delegates to vote for the real estate tycoon. Many delegates are required to vote for Trump because the rules of their state parties compel them to follow the will of the voters in the state. If the delegates were freed to vote their conscience, then it was possible that Trump would fail to garner the 1,237 votes needed for the nomination. In this Hail Mary scenario, delegates would have then held a series of votes until a nominee was chosen.

In order to free up convention delegates, the Never Trump movement hoped to reject the convention rules package on the floor. First, the anti-Trump delegates had to force the party to hold a roll-call vote, instead of a voice vote, on the rules. This required Never Trumpers to obtain the signatures of the majority of delegates from at least seven states. After that, anti-Trump delegates would have needed a majority of all the delegates to reject the rules package. It was unclear whether the anti-Trump forces could have bagged a majority of all the delegates. But Carl Bearden, a Missouri delegate and a member of the Never Trump movement, believes that had his side forced a roll-call vote and won, the convention would have reverted to a previous version of the rules, under which delegates bound to Trump could instead vote their conscience.

This was all a bit complicated. But what wasn’t was the emotion and passions expressed as Never Trump delegates huddled in the halls and back rooms of Cleveland’s Quicken Loans Arena to put their plan in motion.

Their scheme had come together on the fly. Republican Sen. Mike Lee of Utah, who became a vocal Never Trump advocate last week, met throughout the afternoon with a small group of conspirators, including former Virginia attorney general Ken Cuccinelli and Colorado delegate Kendal Unruh, at the back of the convention floor. They eventually rounded up the support of eight states—Washington, Iowa, Virginia, Colorado, Utah, Minnesota, Wyoming, and Maine—plus Washington, DC, two more than necessary. They handed off their petitions to Gordon Humphrey, a former US senator from New Hampshire, to deliver them to the convention secretary, Susie Hudson.

But Humphrey and his co-conspirators couldn’t find her. The Never Trump delegates scoured the convention hall for her, and they texted around a photo with a small headshot of Hudson. They feared that she had gone into hiding to avoid receiving the petitions. (At one point, the Never Trump effort circulated a photo that purported to show Hudson hiding behind a curtain.) When Eric Minor, who led the Never Trump faction of the Washington state delegation, learned, secondhand, that Humphrey had finally handed the petitions to a Hudson emissary, he gleefully relayed the news to his colleagues. But he was only cautiously optimistic about their efforts. Would it work? “Who knows?” he said. “I don’t know. Nobody knows.”

It didn’t work. Trump operatives, fearing an insurrection, pushed hard to peel off support from the anti-Trump crowd. Rick Dearborn, chief of staff to Alabama Sen. Jeff Sessions, warned delegates that backing a roll-call vote for transparency purposes would undermine the convention by turning the attention of the network newscasts to the fracas. (Cuccinelli told reporters that Trump backers had threatened political retribution against Virginia delegates who supported a roll-call vote.)

Chaos ensued when the rules were ultimately brought up for a voice vote, as delegates from Virginia and a handful of other states chanted “shame!” and “I object!” and “no!” A frustrated Cuccinelli—in an apparent dig at Trump’s complaints during the primary process—said, “Disenfranchised! I seem to remember hearing something about this.” He took off his credentials and tossed the badges to the floor, appearing to concede defeat. Yet he was quickly persuaded to fight on, and he began waving the Virginia placard back and forth as if it were a flag.

Delegates from two states, Iowa and Colorado, walked out in protest. The roll-call backers who stayed behind struggled to get Rep. Steve Womack of Arkansas, who was overseeing the process, to acknowledge their objections. One Virginia delegate proposed throwing something on stage to get the chair’s attention. (He elected not to.) The chants for recognition from the anti-Trump delegates were drowned out by a shouts of “We want Trump!” in the risers behind them. And the unamended rules were approved.

On the floor, anti-Trump delegates were furious. “That was so egregiously bad,” Minor told a group of reporters huddled around him. “They do not want Trump to be embarrassed and they want to ramrod him through as the nominee.”

Minor contended that the Republican National Committee and the Trump campaign had not operated in good faith regarding the petition for the roll-call vote: “They have operated completely dishonestly from the get-go here.”

Minor couldn’t say whether the anti-Trump delegates would try to hold a walk-out or other form of protest later. (They had not yet had time to convene and discuss other options.) He wasn’t even sure if he would remain a delegate. “I wouldn’t be surprised based on this display right now if they try to yank my credentials, and I could not care one bit about it,” he said. “There’s no party unity for me.”