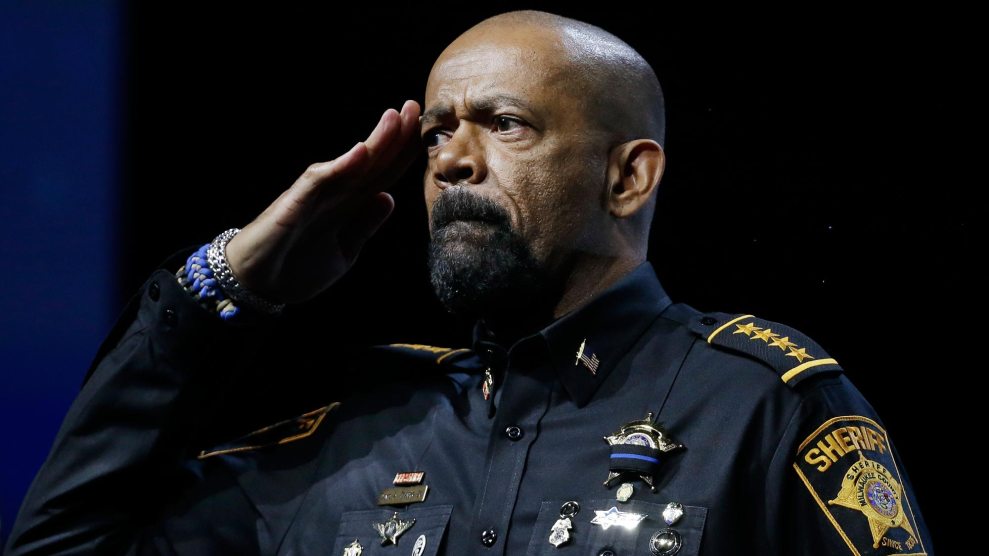 Following the high-profile deaths of black men and women at the hands of law enforcement since Ferguson, Milwaukee Sheriff David Clarke has criticized these victims of police brutality and the movement they’ve helped generate. He’s referred to Black Lives Matter as “black slime” and “garbage,” and he’s called Michael Brown, Eric Garner, Freddie Gray, and Trayvon Martin “goons,” “criminal creep(s),” “criminals” and “co-conspirators in their own demise.”

The frequent Fox News commentator, who is African American, will command a prime-time spot tonight at Donald Trump’s Republican National Convention, where the evening’s theme is “Make American Safe Again” after a two-week period when discussions about race and law enforcement have dominated the news following the fatal shootings of Alton Sterling and Philando Castile, and the killings of eight police officers in Dallas and Baton Rouge, Louisiana. On Twitter this week, news of his CNN interview and impending speech at the RNC was met with praise from many conservatives.

On Sunday night, Clarke appeared on CNN to discuss the killings of three Baton Rouge police officers. “This hateful ideology called Black Lives Matter has fueled this rage against the American police officer,” he said. “I predicted this two years ago.” Popular radio host Dana Loesch on the right-wing network the Blaze praised the interview on Twitter. Clarke’s criticisms of the BLM movement include President Barack Obama, whom he has referred to as a “heartless, soulless bastard” for sticking up for some victims of the violence. Clarke also called both Obama and Hillary Clinton “straight-up cop-haters” for their support of BLM.

After the in-jail death of Sandra Bland in 2015, following her arrest during a routine traffic stop, Clarke excoriated the young woman on Fox News for using expletives while the police were arresting her. He defended the officer who, while threatening use a Taser on Bland, said, “I’m going to light you up.” Clarke explained on Fox News, “We train officers to say, ‘Do X or I’m going to Taser you.’ But I’m not going to get hung up on that. I was more appalled by the language she was using. If she had been my daughter, I would have been embarrassed at the kind of language she was using on the scene.” Here’s the full clip:

After the fatal shooting of unarmed black teenager Michael Brown in Ferguson, Missouri, in August 2014, just days before the teen was supposed to start college, Clarke suggested in a radio interview that the shooting was the result of Brown’s “lifestyle choice.” Clarke said, “He chose thug life. And that’s unfortunate, but that’s what happened. Like I said, he didn’t deserve to die, but he was a co-conspirator in his own demise.” Here’s the full clip:

In June 2015, several police officers were involved in an aggressive confrontation with a number of black teenagers at a Fairfield, Ohio, pool that began with a disagreement over pool fees and a child who wasn’t wearing proper swimwear. The confrontation escalated and police grabbed several teens by the neck, pepper-sprayed them, and slammed one 12-year-old girl against a car, which fractured her jaw and several ribs, according to her family. Discussing cell phone video of the brawl on Fox News’ The Kelly File, Clarke said, “That was a textbook response by police. Totally appropriate use of force.” He continued, “I’d like to use that one for a training tape of how officers should behave and respond in those situations.”

Clarke first gained notoriety when he aired radio ads in 2013 encouraging citizens not to rely on 911 for emergencies, but to instead arm themselves for protection. He spoke at the National Rifle Association’s 2015 conference, where he proposed revising the Great Seal of the United States by switching the arrows in the bald eagle’s claw with “a semi-automatic rifle, preferably one that shoots M-855 ammunition.”

Clarke’s no-holds-barred rhetoric has earned him praise from a number of conservatives. At the NRA convention in 2015, he received a standing ovation for suggesting that the phrase “Keep your hands off our guns, dammit,” be added to the Second Amendment. When The Atlantic interviewed Milwaukee residents for a profile of Clarke, several observed that the sheriff had a Trumpesque way of speaking—and that this worked for him. He “talks like Trump” one Milwaukee resident said. “He says what’s on his mind, and it makes sense to people.”