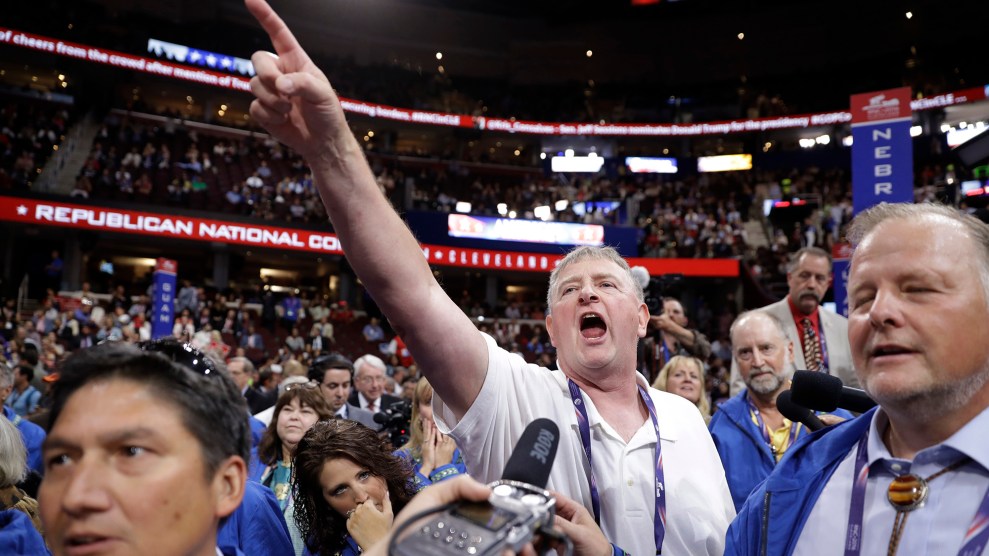 On Monday afternoon, after the Republican National Committee put down a last-ditch effort by delegates opposed to Donald Trump, Eric Minor was seething. The Republican Party and the Trump campaign “have operated completely dishonestly,” said the delegate from Washington state, who bitterly opposes Trump.

On Tuesday night, when Trump officially secured the nomination, Minor stood on the edge of the convention floor with a resigned expression on his face. “There’s nothing else to do at this point,” he said.

Across the convention floor that evening, as the roll call of the states was taking place, the anti-Trump movement went out with a whimper. Some anti-Trump delegates looked on in silence. Others expressed anger at the Republican National Committee, which they believed had squashed their movement in an undemocratic fashion. But few had a plan, or an appetite, to put up more of a fight.

The delegation from Alaska tried to make a final stand by objecting to how its votes had been recorded. The band launched into an impromptu musical interlude as House Speaker Paul Ryan and party officials deliberated over what to do. But after several minutes, GOP chairman Reince Priebus explained that because the other Republican candidates had dropped out, their delegates get “reallocated to the only candidate left that’s running…That’s how the rules are interpreted.” It was the last gasp of the Never Trump movement that has agitated for months to deny Trump the nomination.

Jarrod White, a Never Trump delegate from Arizona, said the next step for the movement was to “tell the story,” and that it is up to the media to “disrupt the power structure.” It wasn’t much of a plan.

Kris Hammond, a delegate from the District of Columbia, was furious Tuesday evening because the party had recorded all 19 of the district’s delegates as Trump votes, when the DC delegates had thought they would be recorded for Marco Rubio and John Kasich—the two candidates who earned delegates in the DC primary. “I’m going to suggest that we [the DC Republican party] oppose Donald Trump,” he said. “If he is not willing to respect our votes, we should not respect this nomination.”

Mainly, the Never Trump delegates now have to decide individually how to reckon with the fact that Trump is the Republican nominee. Philip Wilson, a Never Trump delegate from Washington, said he was torn about how to vote in November because he fears Trump would “subvert the values of the party.” Minor, who just 24 hours ago was spitting fire, was now contemplating what he will do on election day: pick a name to write in or choose a third-party candidate. He knew the fight was over and his side had lost.