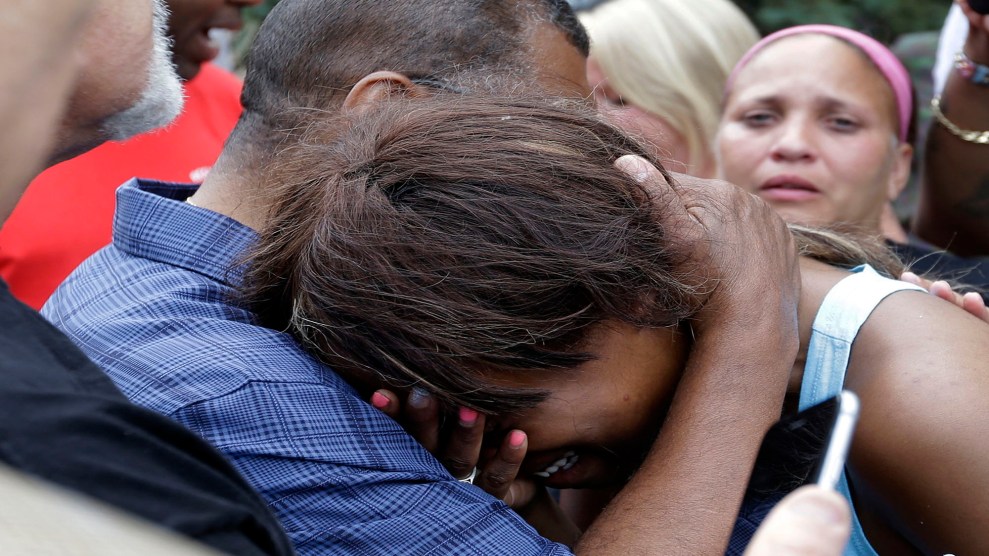 President Barack Obama released a statement Thursday afternoon saying “all Americans should be deeply troubled” by the recent police shooting deaths of Philando Castile and Alton Sterling, both black men. Castile was shot during a traffic stop in a Minneapolis suburb Wednesday night, while Sterling was shot during an altercation with the police outside a convenience store in Baton Rogue, Louisiana, on Tuesday.

“We’ve seen such tragedies far too many times,” the president wrote in a Facebook post. The shootings are not isolated incidents, Obama said, but “are symptomatic of the broader challenges within our criminal justice system, the racial disparities that appear across the system, year after year, and the resulting lack of trust that exists between law enforcement and too many of the communities they serve.”

“To admit that we’ve got a serious problem in no way contradicts our respect and appreciation for the vast majority of police officers who put their lives on the line to protect us every single day,” he continued.

Obama added that he was “encouraged” that the Department of Justice had opened a civil rights investigation into Sterling’s death, and that he has “full confidence” in the department’s ability to conduct a fair investigation.

The president’s statement came after Diamond “Lavish” Reynolds, the girlfriend of Philando Castile, the 32-year-old black man fatally shot by police outside in a St. Paul suburb, spoke out about the shooting during a dramatic press conference on Thursday morning, tearfully giving her account of what happened next.

Speaking to dozens of supporters outside the St. Paul home of Minnesota Gov. Mark Dayton, Reynolds accused the first two officers at the scene of not rendering Castile first aid when he was shot after a routine traffic stop. Live-streamed footage taken by Reynolds in the aftermath of the shooting catapulted the incident onto the national stage and sparked local protests.

“They left him sitting in the car after they shot him. Nobody checked his pulse—nothing,” Reynolds said. “The police officer that was on my side [the passenger side] walked away to call for backup, and the police officer that shot him was standing there with his gun still drawn after he was shot.”

Instead, responding officers came to the aid of the officer who had shot Castile, who was visibly upset in the video, Reynolds said. “The police officers soothed him. They pulled him over to the side. And they began to calm him down and tell him that it was okay and that he was going to get through this—as they put me in the back of the police car.”

The Minnesota Bureau of Criminal Apprehension (BCA), which is investigating the shooting, did not respond to Mother Jones‘ request for a response to Reynolds’ allegations. New footage, first posted to Twitter and republished by Reuters on Thursday afternoon, appears to show officers performing CPR on Castile, though it’s unclear which officers performed the first aid and at what point during the incident this occurred.

Reynolds also said she was questioned for several hours at a police station. Officers separated her from her four-year-old daughter, she said, and did not give her food, water, or allow her a phone call during the questioning. “I was not released until 5 o’clock this morning,” after officers dropped her off at home, she said.

The BCA did not immediately respond to questions about how long Reynolds was held or the conditions of her detention. The police have yet to release the identity of the officers involved in the shooting.

Castile’s mother described her son in an interview with CNN Thursday morning: “Anyone who knows my son knows he’s a laid-back, quiet individual. All he does is go to work, pay taxes, and come home every day and play video games.”

More than 100 protesters rallied outside the governor’s mansion Wednesday night. Rallies were also held in honor of Sterling in Oakland, Houston, and New York City on Wednesday.

At a press conference Thursday afternoon, Minnesota Gov. Mark Dayton said he believed race played a role in the shooting. “Would this have happened if the passengers were white? I don’t think so.”

This post was updated on June 7 at 5:00 p.m., to include information about a newly released video and the governor’s comments about race.