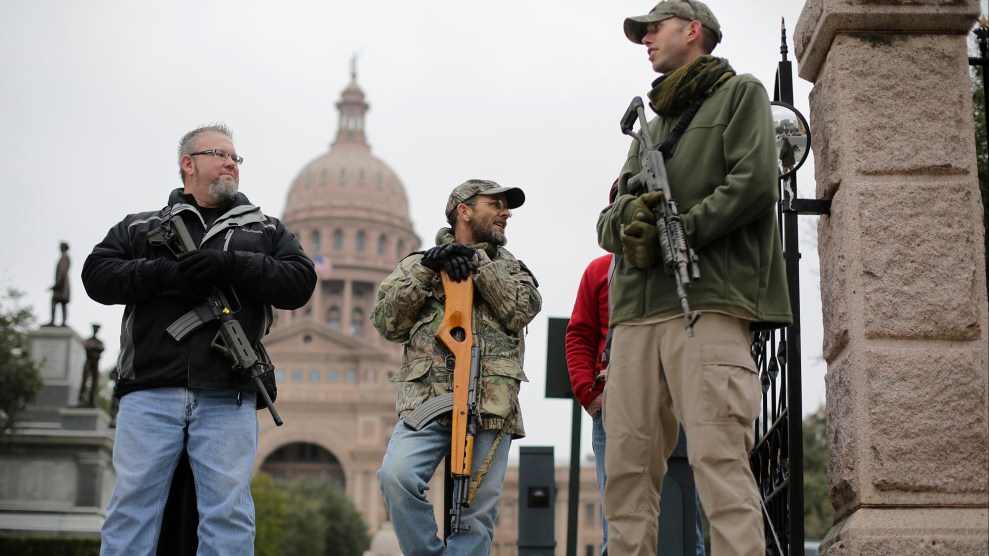 America has now experienced two mass shootings in less than a year that have been complicated by open-carry gun laws.

As the deadly attack on police officers unfolded in Texas on Thursday, the Dallas Police Department posted a photo of a “suspect” (since deleted by the Dallas PD) and solicited the public’s help finding him. The photo showed a man in a camouflage T-shirt with a rifle strapped over his shoulder who was participating in the peaceful Black Lives Matter protest where the attack took place. 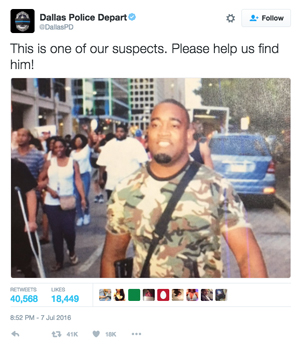 About 40 minutes later, the Dallas PD announced that the man, now described as a “person of interest,” had turned himself in. He was interrogated and soon released, no longer suspected of any involvement in the attack. The man, Mark Hughes, was carrying his gun lawfully and has since received numerous death threats, according to his attorney. (Texas, like most states, allows rifles to be carried openly in public.)

The sequence of events involving Hughes underscores how citizens carrying firearms on display can compound the danger in a violent, chaotic situation. Last fall, several police chiefs in Colorado spoke out about the potential perils after authorities responded tepidly to a report of a man in Colorado Springs walking around with an assault rifle—just before he went on a deadly rampage.

“The problem that we all face is that we never have all the information,” said one chief after the Colorado Springs attack. Another noted that the police had no codified way for responding to such situations. In Colorado Springs, that may well have prevented a faster response to a lethal threat. In Dallas, clearly it could have endangered Hughes’ life and possibly those of others around him.

Gun lobbyists argue that arming more “good guys” is the solution to stopping mass shootings, but history shows that’s a myth. And police leaders, FBI agents, and other law enforcement officials have long said that ordinary citizens with guns will “divert them from the real threat.”

Update, July 11: According to the New York Times, upwards of 20 to 30 people were open carrying AR-15s and other types of military-style semi-automatic rifles at the Black Lives Matters protest last Thursday, which “created confusion for the police as the attack unfolded, and in its immediate aftermath made it more difficult for officers to distinguish between suspects and marchers.”

Beyond Hughes, it is unclear who comprised the 20 to 30 people carrying rifles at the rally. As I’ve reported in the past, Texas is home to groups of provocative gun-rights activists, including Open Carry Texas, which in its push for looser gun regulations gained a reputation for intimidation tactics and harassment and bullying of women. Dallas police chief David O. Brown told CNN’s “State of the Union” on Sunday that at least some of the 20 to 30 armed people were wearing gas masks, bulletproof vests, and camo fatigues, “for effect, for whatever reason.” When the shooting at police officers began, Brown said, “they began to run,” causing some law enforcement on the scene to view them as suspects. “Someone is shooting at you from a perched position, and people are running with AR-15s and camo gear and gas masks and bulletproof vests, they are suspects, until we eliminate that.” (The head of Open Carry Texas told the Times that in his view it wasn’t difficult for the police “to tell who the good guys and the bad guys” were.)

President Obama also commented to reporters over the weekend about how open carry exacerbated the mass shooting in Dallas: “Imagine if you’re a police officer and you’re trying to sort out who is shooting at you,” he said, “and there are a bunch of people who have got guns on them.”