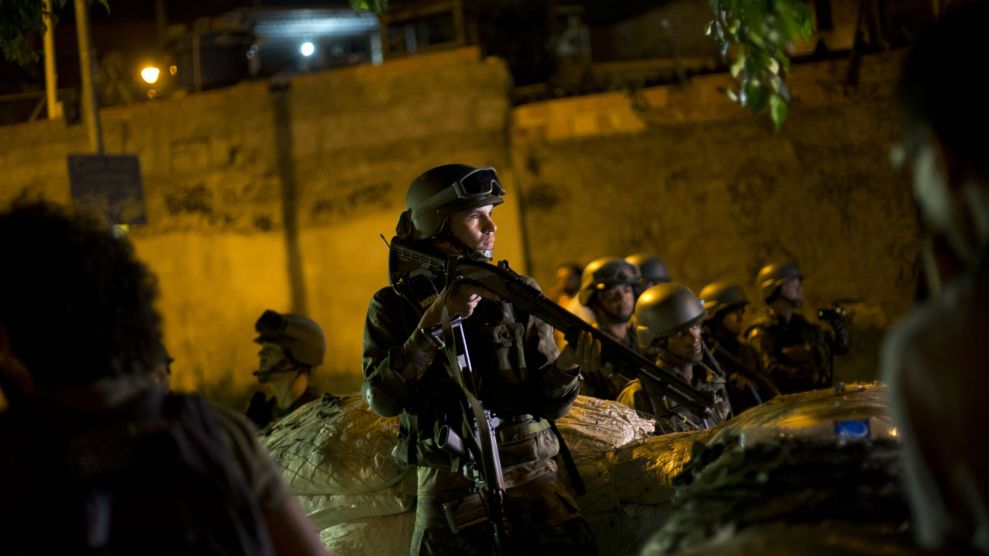 Brazilian soldiers guard an entrance to the Mare slum during a protest against violence by security forces in Rio de Janeiro. Silvia Izquierdo/AP

The Brazilian state of Rio de Janeiro has promised to beef up public security ahead of the Olympics next month. But those efforts are complicated by a staggering rate of unlawful police killings, according to a new report by Human Rights Watch, that has fostered deep divisions between law enforcement and the communities it serves.

Since 2006, Rio’s police have killed at least 8,021 people, including 645 people last year, according to the 109-page report, released Thursday. In the city of Rio alone, police killings accounted for a whopping 20 percent of all homicides last year. And while Human Rights Watch says many of these officer-involved killings were likely justified uses of force, since cops patrolling Rio often come up against heavily armed gangs and need to protect themselves, the advocacy group found ample evidence to suggest that some were “extrajudicial killings.”

Human Rights Watch found that for every officer killed on duty in Rio de Janeiro last year, 24.8 civilians were slain by the police—three times the rate in the United States.

In at least 64 cases since 2006, the Brazilian police have allegedly tried to cover up unlawful killings, Human Rights Watch found, citing interviews with officers, victims’ families, prosecutors, and others. The report details incidents where cops planted evidence, guns, or drugs on shooting victims; removed clothes from dead bodies, hoping to discard bullet fragments that could identify the shooter; and even delivered the corpse of someone they’d shot and killed to a hospital, claiming they were trying to “rescue” the victim. Of 32 “rescues” that Human Rights Watch examined, the victim was dead on arrival at the hospital in at least 27 cases. “While these false ‘rescues’ give the appearance of legitimate effort by officers to help victims, in reality they destroy crime scene evidence and hinder forensic evidence,” the advocacy group wrote.

Most of the officers involved have never been brought to court. There were 3,441 recorded police killings between 2010 and 2015, but the state attorney general’s office pursued charges in just four cases, Human Rights Watch found. Rio’s attorney general, Marfan Martins Vieira, said his office had only been able to prosecute a small number of officers because official investigations of such killings are typically of “poor quality,” even though he knows of killings where he believes cops faked a shootout to make it look like they acted in self-defense.

For every officer killed on duty in Rio de Janeiro last year, 24.8 civilians were slain by the police—three times the rate in the United States.

This isn’t the first time the issue has come up just before Brazil prepares to take center stage. Nine years ago, weeks before the Pan-American Games opened in Rio, authorities converged on the Complexo do Alemao favela as part of a series of sweeps against drug operations in the city’s slums. In an ensuing shootout, 19 civilians were killed. Five of the victims that day were shot at point-blank range. Nine others were shot in the back. Human Rights Watch found that no officer was ever held accountable for the 2007 incident, and a federal commission later determined that several deaths “were the result of a procedure of summary and arbitrary execution.” At the time, then-State Security Secretary Jose Mariano Beltrame told NPR the operation was not intended to be violent but had turned bloody after a confrontation with suspected drug traffickers. “We do not go to these regions looking for or producing violence,” he said. “We were met brutally with bullets and potent arms.”

Ahead of the Olympics, Rio de Janeiro has bolstered security around the games’ venues to 85,000 officers, thanks to some emergency funds. But high-profile incidents continue to trouble the city. Athletes have been mugged and human remains have washed up on a beach near the volleyball arena. Robert Muggah, a security expert at the Igarapé Institute in Rio, recently noted a 15 percent increase in homicides during the first four months of this year compared with same period in 2015. The city’s mayor has blamed the state, which he said was “completely failing at its work of policing and taking care of people.”

Maria Laura Canineu, the Brazil director at Human Rights Watch, said police brutality has made cops feel less safe. It’s dangerous to patrol Rio’s slums—attacks by gang members are common—and criminals are more likely to fight back if they think their lives are at risk, the advocacy group wrote in its report. Some officers told Human Rights Watch that they’d witnessed unlawful police killings but didn’t report anything because they feared potential retaliation from their colleagues. “Unlawful killings turn communities against the police and undermine security for all,” Canineu said in a statement. “You can’t expect community policing to work when police are executing members of the communities they are supposed to protect. And you can’t expect honest cops to perform well when they live in constant fear—not only of gang members, but also of their fellow officers.”