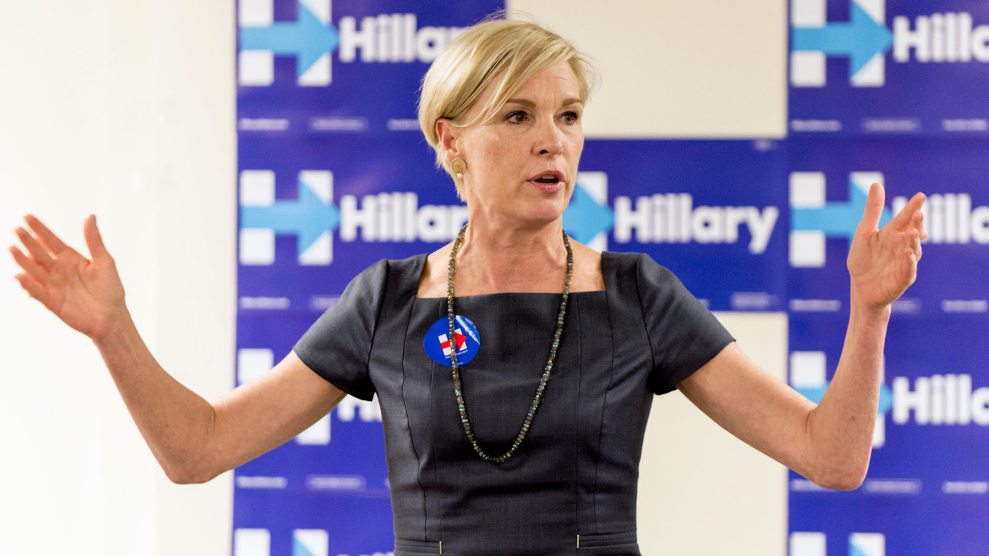 Last night at the Democratic National Convention, Planned Parenthood Federation of America President Cecile Richards sat next to former President Bill Clinton as one speaker after another called for equal pay, family leave, and affordable child care, and acknowledged the historic nature of Hillary Clinton being nominated as the first female candidate for president of the United States. Tonight, Richards, the head of the $1.3 billion women’s health organization with more than 700 affiliated health centers around the country, will likely touch on the numerous efforts at the state and federal levels to kneecap Planned Parenthood—and reproductive health care more broadly.

“The last few years have been brutal for those of us who believe that women should be able to make their own health care decisions,” wrote Richards in an op-ed published in Time today in which she praised Sen. Tim Kaine, Clinton’s running mate, as an “incredible ally” for women’s health. “As elected officials learn that women across the nation can’t get the sexual and reproductive health care they need because of legislative barriers, we have seen them evolve. Senator Kaine is one of those leaders.”

This is not Richards’ first time speaking at a Democratic convention. She also appeared in 2012, when she spoke about Republican efforts to roll back women’s health programs, focusing specifically on their efforts to slash funding for birth control. In the last four years things have gotten worse: Anti-abortion politics and attacks on providers have increased, thanks to a Republican-controlled Congress, activists in statehouses, and a slew of sting videos released last summer that targeted Planned Parenthood.

Here’s a primer on some of the biggest challenges faced by Planned Parenthood and other women’s health organizations in the run-up to this election:

Doctored videos: Last July, anti-abortion activist David Daleiden and his nonprofit the Center for Medical Progress (CMP) released a series of secretly recorded and deceptively edited videos purporting to show that Planned Parenthood is making a profit off its fetal tissue donation program—a practice that is illegal. The videos have since been discredited, with reports showing that they were deceptively edited, but nonetheless the tapes set off a nationwide offensive against Planned Parenthood, including efforts in Congress and in multiple states to defund the organization by prohibiting the use of government-funded Medicaid by low-income patients. The videos also led to 12 state-level and 4 congressional investigations of Planned Parenthood, time-consuming and costly efforts that have all since found no evidence of fetal tissue profits by the organization.

Clinic violence: Last November, 57-year-old Robert Lewis Dear allegedly entered a Planned Parenthood facility in Colorado Springs and began shooting with an assault-style rifle. He killed three people and wounded nine. After being taken into custody by law enforcement, Dear said, “No more baby parts,” and when he was in court he shouted,  “I am a warrior for the babies.” Dear also had a history of expressing anti-abortion sentiment, including an episode where he put glue in the locks of a Charleston, South Carolina, Planned Parenthood clinic.