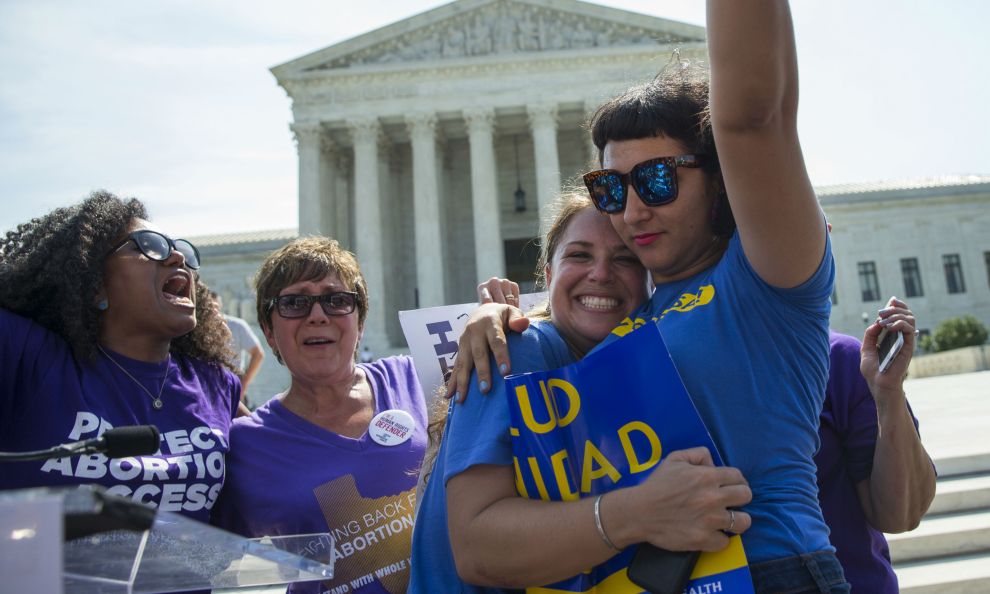 Bethany Van Kampen, left, hugs Alejandra Pablus as they celebrate during a rally at the Supreme Court in Washington on June 27, 2016, after the court struck down Texas' widely replicated regulation of abortion clinics. Evan Vucci/AP

The 5-3 Supreme Court decision that decimated Texas’ HB 2 and established that admitting privileges and ambulatory surgical center requirements qualify as undue burdens on a woman’s right to an abortion has led to a flurry of activity across the country in reproductive rights.

Beginning in Texas a few days after the high court’s ruling, the Department of Health released statistics on abortion rates for the year after the Legislature enacted the HB 2 restrictions in 2013, which showed a 14 percent drop in the number of procedures in 2014—the steepest drop in at least eight years. The agency, which is not required to release abortion statistics but has done so annually, came under scrutiny amid accusations from the American Civil Liberties Union that it delayed releasing the numbers even after the data was finalized to conceal the impact of HB 2.

Lt. Governor Dan Patrick expressed his satisfaction with the findings in a radio interview Thursday.

“You see the Wendy Davis crowd, the abortion crowd, and the ACLU decrying these numbers. ‘How terrible this is!’ How terrible? Everyone, even if you’re pro-choice, you ought to be celebrating life. There are about 10,000 to 12,000 two- and three-year-olds running around today acting like two- and three-year-olds act because of this legislation,” he said. “Our true purpose was to make sure the environments were safe for women, but obviously, if you end up as a result having fewer abortions and saving lives, that’s something that everyone should celebrate.”

The law closed more than half the clinics in the state. A report by the Texas Policy Evaluation Project found in the wake of new abortion restriction tactics over the years, the number of women who have self-induced is staggering—as many as 240,000 women between the ages of 18 and 49 have tried to terminate their pregnancies on their own during their lifetime.

Today in Louisiana, the Center for Reproductive Rights filed a lawsuit challenging all seven abortion restrictions passed in the state this year.

“Louisiana politicians are trying to do what the U.S. Supreme Court just ruled decisively they cannot, burying women’s right to safe and legal abortion under an avalanche of unjustified and burdensome restrictions,” said Nancy Northup, president and CEO of the Center for Reproductive Rights. She described the laws as creating “a web of red tape that women and their doctors cannot hope to escape, driving safe and legal care out of reach for many Louisiana women and putting their health and well-being at risk.”

The state passed the highest number of abortion restrictions in the country this year, affecting nearly every aspect of reproductive health care. One law would triple the waiting time between a consultation with a physician and the actual procedure from 24 hours to 72 hours; another would ban dilation and evacuation, the most common procedure for second-trimester abortions; another banned abortion in cases of fetal genetic abnormalities, and required cremation or burial of aborted fetal tissue. Still another proposal blocked state spending in the form of Medicaid dollars at clinics that perform abortions, such as Planned Parenthood. The state also has a law that imposes new credentialing requirements on abortion providers—they must be board-certified in family medicine or obstetrics and gynecology, or resident trainees under the supervision of a physician who has such credentials. According to the complaint, if a provider collects reimbursement for the costs of collecting and storing fetal tissue from abortions for medical research, he or she could face “a term of decades of imprisonment at hard labor.”

In Florida, Federal District Judge Robert Hinkle ruled Thursday night to put key portions of a new omnibus law on hold that would block public funding for Planned Parenthood and increase inspection requirements of medical records. The ruling came only a few hours before the law was set to go into effect. Planned Parenthood officials estimated that the measure would have cost them about $500,000 in public funding. Hinkle also ruled against a requirement of annual state inspections of the medical records for half of all clinic patients, which Planned Parenthood estimated to be about 35,000 people per year.

The ruling, however, kept in place a measure redefining the third trimester as “the period of time from the beginning of the 24th week of gestation through birth,” which in effect shortened the period during which a woman can legally have the procedure done.

“We will not stop fighting until every person has access to the health care they need and deserve, and until the law guarantees it,” said Cecile Richards, president of Planned Parenthood, in a statement regarding the Florida ruling. “A growing number of young people are fighting for justice in this country. There is power in our movement. We have reached the tipping point, and we are not going back.”