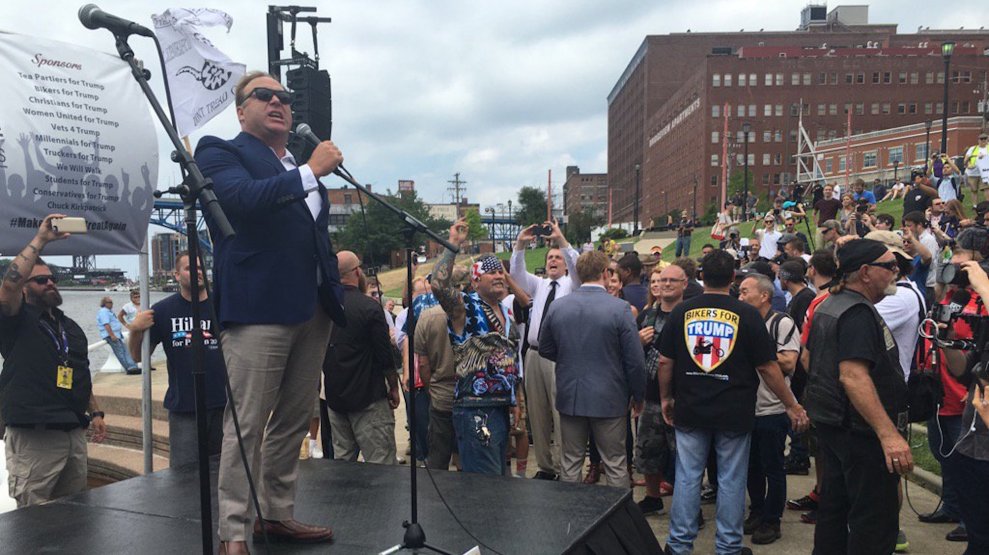 On Monday afternoon, several hundred supporters of Donald Trump, many wearing “Hillary for Prison 2016” T-shirts, gathered by the Cuyahoga River to cheer on the reality-television mogul. A parade of tea party speakers hailed Trump and blasted Hillary Clinton, President Barack Obama, the US government, and the mainstream media, and the mostly older and white crowd applauded. The group Bikers for Trump provided the security for the stage, as Trumpers celebrated the downfall of the Republican establishment. The event captured the profound bizarreness of the Trump enterprise.

The headline speaker was Roger Stone, the veteran political hit man who has long been an adviser to Trump. He now says he has no official connection to the Trump campaign, but he was a chief organizer of this rally, which was originally planned when Stone and other Trumpsters feared the #NeverTrump movement might find a way to stop Trump at the convention. The always-dapper Stone—this day decked out in a beige double-breasted suit—took to the stage in front of a distinctly non-dapper crowd, and he apologized for being late. He said he had just been in meetings with Trump’s staff. Then Stone, a proud conspiracy theorist (who believes LBJ killed JFK) and author of a book excoriating the Clintons, launched into a tirade against Hillary and Bill.

The Hillary Clinton seen in public, he insisted, is not the real Hillary Clinton. She is, he exclaimed, “a short-tempered, foul-mouthed, bipolar, mentally unbalanced criminal.” (“And a reptile!” a member of the audience shouted.) One problem, Stone noted, is that the public doesn’t know about Vince Foster. He was referring to the senior White House aide who committed suicide during the Clinton presidency. Stone went on to revive the Foster conspiracy theory that was once a mainstay of the Clinton-hating right. Foster’s body was discovered in a Virginia park outside Washington, DC. But, Stone asserted, no mud or dirt was found on Foster’s shoes. However, he added, there were carpet fibers. This means, he claimed, that Foster was rolled up in a carpet and removed from the White House, and, he said, Hillary Clinton had ordered this cover-up. Her goal? To make sure that Foster’s office—which contained papers proving her illegal deeds—did not become a crime scene.

Of course, the official investigations of Foster’s tragic suicide concluded he killed himself at the park. But here was a Trump operative, fresh from huddling with Trump’s lieutenants, promoting an unfounded notion. The crowd lapped it up. (In May, Trump himself said there had been something “very fishy” about Foster’s death.)

Stone continued, maintaining that Bill Clinton had raped several women and Hillary had protected him. He asserted that the Clintons had taken money from the Chinese, the Russians, and the Saudis “for treason.” He exclaimed, “We demand the prosecution of Bill and Hillary Clinton for their crimes.” He even assailed Chelsea Clinton for being “nasty, greedy, foul-mouthed, corrupt.”

It was quite the performance, and Stone was received like a celebrity. This was no surprise, since many in the crowd were fans of Alex Jones, the nation’s No. 1 conspiracy theorist and a Trump fan. Jones was there, too.

Before Stone spoke, Jones, a sponsor of the rally and perhaps the most prominent 9/11 truther, jumped on the stage. His followers in the crowd went wild and rushed down the hill toward the stage. Throughout the event, they shouted statements demonstrating they were devotees of Infowars.com, Jones’ conspiracy-mongering website. “Go ahead and do a false flag, Obama, we’ve been waiting for you,” one attendee yelled at the sky. Jones fanned those flames, claiming Hillary Clinton is a “foreign agent of the communist Chinese, the Saudi Arabians, and others; no news carried that because it was absolute truth and would destroy her.”

Jones is a peddler of a variety of tin-foil-hat conspiracy theories. He has suggested that 9/11 was an inside job pulled off by the Bush administration, that the Sandy Hook massacre was orchestrated by the US government, and that Obama has plotted to round up dissenters in FEMA camps. Yet Trump hasn’t shied away from associating with Jones, appearing for an interview on Jones’ radio show last December. At this rally, Jones gave a full-throated endorsement of Trump. “Once the general public understands the paradigm, it’s game over!” he shouted to cheers. “Worldwide, globalism and the New World Order are in trouble.”

“The establishment, George Soros, and others have done everything they can to shut down our free speech,” Jones bellowed.

Jones was interrupted midway through his speech by comedian Eric André, apparently filming a bit for his Cartoon Network show. André had been asking questions of attendees near the stage, and Jones invited him up. Jones accused André of being from The Daily Show (perhaps confusing him for another African American comedian). “Oh no,” Jones said sarcastically, “the Democrats are never violent, like at the Black Lives Matter events.”

André went into a weird comedy route, handing Jones a key to his hotel room and asking him to have sex with his wife. He goaded Jones: “Who put the bombs in Tower 7?” Jones replied, “Well, I’ve exposed that.” Yes, an event promoting Trump for president briefly turned into a showcase for 9/11 trutherism.

Once he got André offstage, Jones warned the crowd about the master plans of the shadowy forces of globalization, noting these evildoers will try to swipe the election from Trump. “But even if they’re able to steal the election,” he said, “it doesn’t matter, because the public is waking up to their tricks, and at the state and local level people are understanding that globalism is making us poor, globalism is about controlling us, globalism is about us not being able to have our own destiny, and all over the United States and all over the world, people are saying, why can’t I have guns to protect myself?” In Jones’ view, either Trump will be elected or the New World Order globalists will succeed with their dark plots. With many members of the crowd echoing his words, Jones shouted one of his catchphrases: “The answer to 1984 is 1776!”

Jones and Stone are not outliers in Trump’s world. Stone has been tight with the mogul for decades, and he indicated he’s advising him this week. Trump, when he appeared on Jones’ radio show, praised him, saying, “Your reputation is amazing.” The fact that Jones and Stone were the heart and soul of the main pro-Trump rally of the week shows how far Trump has pulled the GOP and the Cleveland convention into the fever swamps of the right.