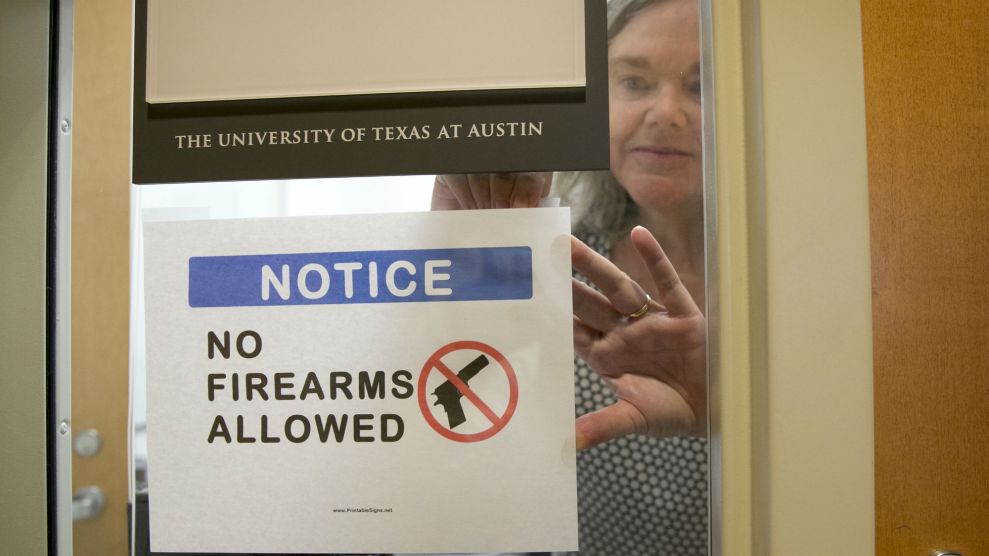 A professor at the University of Texas-Austin posts a sign prohibiting guns at her office.Jay Janner/Austin American-Statesman via AP

On Monday, 50 years to the day since the clock tower massacre at the University of Texas-Austin, a new Texas law made it legal to carry concealed guns at public universities, including in dorms and classrooms. The legislation allows private universities to opt out, and all but one have chosen to do so. The policy has been controversial to say the least; it prompted a lawsuit from three University of Texas professors, who claimed that the law forces state schools to impose “overly-solicitous, dangerously-experimental gun policies” and violates the First and Second Amendments.

Texas is now the eighth state to allow concealed carry on college campuses, with its law among the broadest in terms of where guns are allowed. Other states have passed so-called “campus carry” laws recently, and more could soon follow.

In Tennessee, a new law guarantees concealed-carry rights for full-time university employees. They must register their guns with campus or local law enforcement. In May, Republican Gov. Bill Haslam allowed the measure to pass into law without his signature. “I hope that as a state we will monitor the impact of this new law and listen to the feedback of higher education leaders responsible for operationalizing it,” Haslam said, as the state’s colleges and universities scrambled to prepare for the change.

A broader law may be in the works for Tennessee next year: Republican Rep. Andy Holt, who raffled off two AR-15s after the mass shooting in Orlando, said it was an “important next step” to let students be armed. “My intention is to eliminate all gun-free zones, whether it’s the legislature or a college campus,” he said.

Georgia considered a campus carry bill similar to the one in Texas this year; it passed both the state Senate and House but was vetoed by Republican Gov. Nathan Deal, who said the right to bear arms in “sensitive places” was not guaranteed by the Second Amendment or the Georgia Constitution. “From the early days of our nation and state, colleges have been treated as sanctuaries of learning where firearms have not been allowed,” Deal wrote. “To depart from such time-honored protections should require overwhelming justification. I do not find that such justification exists.”

Utah was the first state to approve campus carry, in 2004. The list has since grown to include Colorado, Idaho, Kansas, Mississippi, Oregon, Texas, and Wisconsin. As in Tennessee now, Arkansas has a law allowing university employees to carry licensed firearms, but not students. Additionally, eight states allow guns to be stored in vehicles on campus grounds, though they disallow carrying them more broadly on campuses: Florida, Georgia, Nebraska, North Carolina, North Dakota, Ohio, South Carolina, and Tennessee.

A driving force behind the push has been Students for Concealed Carry, an activist group born out of the 2007 Virginia Tech massacre that claims 43,000 members. The group reportedly was developed by members of The Leadership Institute, an organization focused on recruiting young conservatives. In particular, Students for Concealed Carry pushed hard for campus carry in Idaho, though the group was not particularly enthusiastic about Texas’ new campus-carry law—arguing that it was rife with too many exceptions.

Supporters of campus carry argue that these laws make students and faculty safer from attacks like the one that devastated the University of Texas a half century ago. But while there is no evidence that ordinary civilians with guns stop mass shootings, other outcomes have started to materialize, including a professor who accidentally shot himself in the middle of class.

This story has been updated to clarify the role of SCC in advocating for state laws.