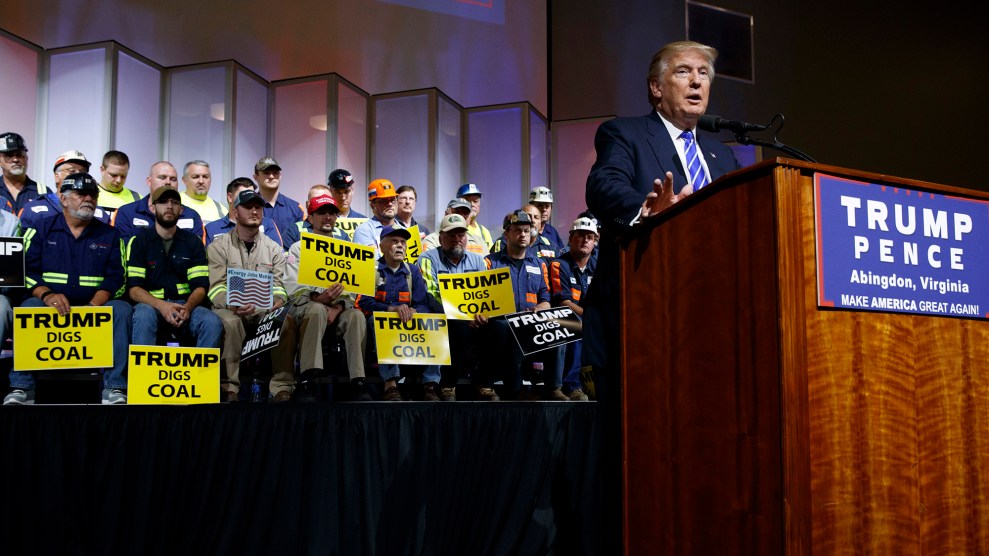 Donald Trump will deliver a speech on Monday afternoon in Youngstown, Ohio, a quintessential Rust Belt city that has declined sharply from its manufacturing boom times. It’s the kind of place where Trump is perfectly positioned to make inroads among white working-class residents who have long voted Democratic but are drawn to Trump’s opposition to free-trade deals and his pitch for a return to better days.

But Trump doesn’t plan to talk about the economy in Youngstown. Instead, he will deliver a foreign policy address focused on ISIS.

In his speech, Trump will also propose an “ideological test” to administer to all immigrants entering the United States, according to the Associated Press. The “test for admission” would include questionnaires, a search of the immigrants’ social-media accounts, and interviews with friends and family to assess the immigrant’s views on religious liberty, gender equality, and LGBT rights.

The foreign policy focus is a strange one for Youngstown, where the dissolution of the domestic steel industry triggered economic depression and racial tensions—the very circumstances that have fueled Trump’s rise. But it wouldn’t be the first time Trump has delivered a message to one audience that is better suited to another.

At a rally in Loudoun County, Virginia, earlier this month, Trump rattled off a list of shuttered manufacturing plants—the exact topic that would most resonate in a place like Youngstown. But Loudoun County is not in the Rust Belt. It’s the richest county in the United States, thanks to lucrative defense contracts after September 11, 2001. All the factories Trump mentioned during this speech were far from the Washington, DC, exurbs of Loudoun County. One was in North Carolina.

Trump kept up the trend last week in southwestern Virginia coal country, where a speech to coal miners focused as much on the latest batch of Hillary Clinton’s emails as on the future of the state’s coal mines. Surrounded on stage by miners in hard hats, Trump couldn’t resist a reference to his winery in Charlottesville, Virginia, the college town 250 miles from where Trump was speaking in Abingdon. “I don’t know if you know my Charlottesville place, but it’s a fantastic place,” he said. “It’s now a winery, it’s one of the largest wineries on the East Coast.”

Trump has also insisted on campaigning in blue states he is highly unlikely to win. He gave a rambling talk in Fairfield, Connecticut, on Saturday evening. At the end of August, he plans to campaign in Oregon, another deep-blue state in an election where even some Republican strongholds are turning purple.

And then there was Trump’s puzzling decision to hold a rally in Portland, Maine, earlier this month. Because Maine allocates electoral votes by congressional district, Trump has a shot to win the state’s relatively conservative 2nd District. The only problem: He held his rally in the wrong district.