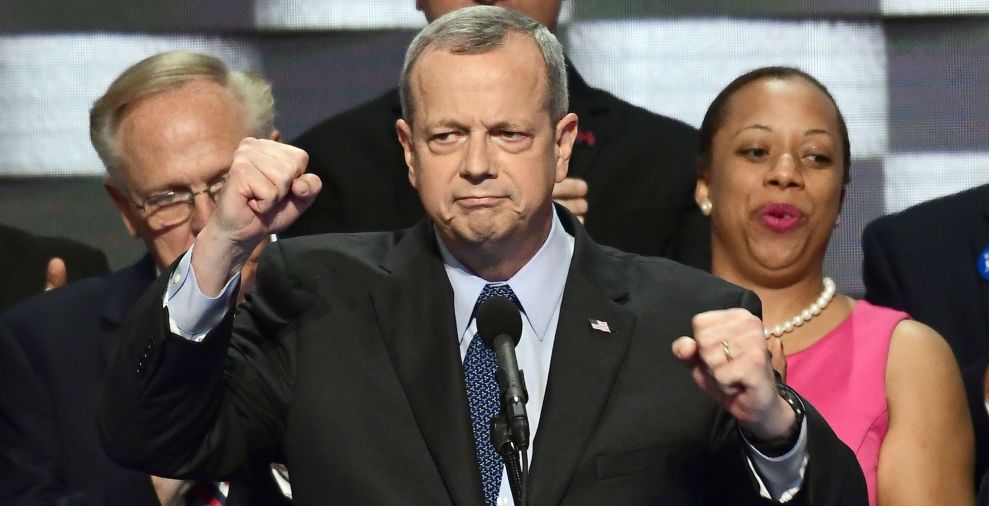 When retired Marine General John Allen endorsed Hillary Clinton and savaged Donald Trump in a speech at the Democratic National Convention, he put himself at the center of both the presidential election and the debate about whether retired generals should be involved in politics. Yet unlike David Petraeus, Stanley McChrystal, and other prominent generals of the wars in Iraq and Afghanistan, Allen remains relatively unknown to most Americans.

The former Marine four-star general has held some of the most important posts in both of those wars. He commanded a Marine brigade in Iraq in 2006 and later became the deputy commanding general of Central Command, which oversees the American war efforts in the Middle East and Central Asia. In 2011, he took over for Petraeus as the commander of troops in Afghanistan and managed a steep draw-down of American soldiers while trying to bring Afghan forces into the fight.

His willingness to push that transition rather than clamoring for more troops helped Allen win favor with President Barack Obama. “Obama has offered a degree of praise for Allen that never was accorded to his predecessors,” the Washington Post reported in 2012. “When Obama and Allen walked out of a lunch in the White House earlier this year, the president put his arm around the general, according to administration and military officials. ‘John Allen is my man,’ Obama said to staffers waiting in an anteroom.”

Allen’s name also surfaced in connection with the Petraeus sex scandal that erupted in 2012. Investigators looking into Petraeus’ emails found potentially inappropriate messages Allen exchanged with Jill Kelley, a Tampa socialite who was friendly with Petraeus and other high-ranking officers at Central Command. Allen was eventually cleared of any wrongdoing in January 2013.

Allen left Afghanistan shortly after his exoneration and was slated to move to Brussels and take command of NATO. Instead, he retired just days after departing Afghanistan, saying that his wife was seriously ill and that he wanted to focus on taking care of her. “Right now, I’ve just got to get her well,” he told the Post at the time. “It’s time to take care of my family.” He denied that the email investigation had any role in his retirement.

His ties to the Obama administration helped Allen land a post-retirement job in late 2014 as the president’s envoy to the awkwardly named “Global Coalition to Counter ISIL.” He helped get long-sought permission to launch airstrikes against ISIS from Turkey. But Allen’s 13-month tenure also coincided with setbacks, including the high-profile failures of training programs for Syrian rebels and Russia’s brutal entrance into the war on the side of the Syrian government. Allen resigned last October. After his speech at the DNC, Trump attacked his record, saying Allen “failed badly in his fight against ISIS.”

The DNC speech also got Allen in hot water with retired Army General Martin Dempsey, the former chairman of the Joint Chiefs of Staff. Along with Allen, Dempsey criticized retired Lt. General Mike Flynn, who spoke in support of Trump at the Republican National Convention, in a letter to the Washington Post. “As generals, they have an obligation to uphold our apolitical traditions,” he wrote. “They have just made the task of their successors—who continue to serve in uniform and are accountable for our security—more complicated. It was a mistake for them to participate as they did.”

But Allen isn’t backing down. He has defended his speech as a one-off event made necessary by the “horror” he felt at Trump’s comments about torture and killing the families of terrorists. “I decried these comments that put us on a potential track for a civil-military crisis the like of which we have never seen in this country,” Allen said on ABC’s This Week on Sunday. “That was the reason I came off the bench. I don’t intend to stay out there to be politically active.” A Clinton campaign spokesman told Mother Jones that Allen “offered occasional advice on national security issues but has no formal role with the campaign, nor do we expect him to in the future.”

No matter the role he may or may not play in the campaign—or a potential Clinton administration—Allen’s surprisingly fiery speech has become the key symbol for Clinton’s argument that Trump can’t be trusted with control of national security.