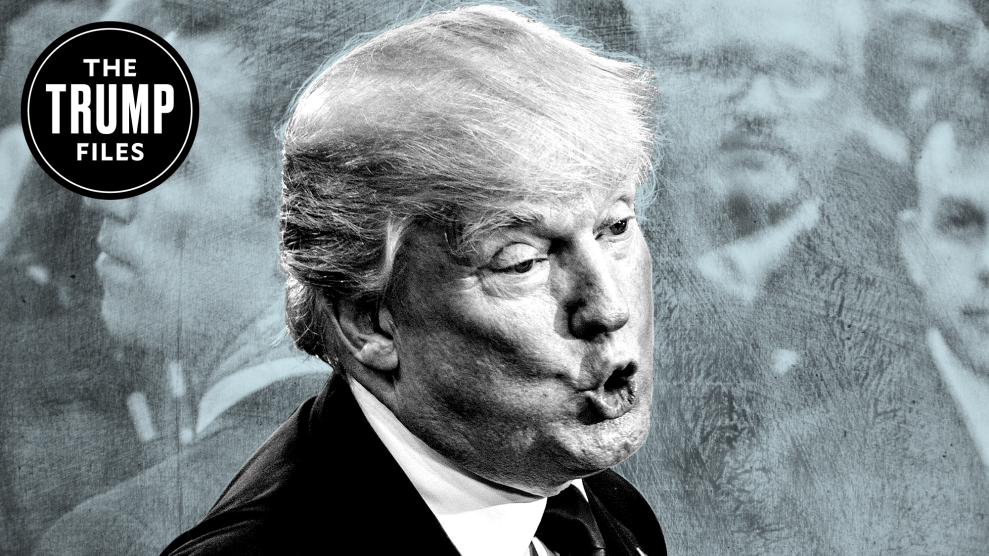 If you think Donald Trump is a headache for GOP chairman Reince Priebus, who frequently has to clean up after Trump’s inflammatory comments, just imagine what former Reform Party chairman Russ Verney had to go through. Verney led the party during the 2000 election, when Donald Trump briefly jumped into the race for the Reform nomination for president. But that didn’t stop Candidate Trump from going on Howard Stern’s radio show and putting his then-girlfriend and now-wife Melania on air with the host for a bizarre, creepy, and totally misogynistic interview about life and sex with Trump.

When Trump called in to Stern’s show on November 9, 1999, the conversation turned to Melania (“a potential first lady,” Trump said) and her looks. “Let me talk to that broad in your bed,” Stern demanded. So Trump summoned Melania, who was apparently scantily clad and conveniently sitting nearby, to come to the phone. With Stern oozing his creepiest charm, things rapidly got weird.

After demanding that Melania “put on your hottest outfit” for a Stern-Trump night on the town, Stern asked Melania what she was wearing right then. “Uh, not much,” she replied.

Stern pressed on: “Are you naked? Are you nude?” Melania laughed. “Almost,” she said.

“Ahhh, I’ve got my pants off already,” Stern groaned.

Dropping his voice, Stern asked about how often Melania and Trump had sex and how good it was. “We have a great, great time,” she said, claiming that she and Donald did the deed “even more” than daily. “I can tell you need love,” Stern told her. Other topics of the interview included whether Melania stole cash from Trump’s wallet, what she wore to the beach, and her “very nice chest for a model.”

Trump apparently had no problems with Stern’s racy questioning of his then girlfriend. “Oh man, she’s naked there, isn’t she?” Stern asked when Trump got back on the phone. “She is actually naked,” Trump said. “It’s a thing of beauty.”

In a version of the interview clipped by BuzzFeed News, Stern begged Trump to have sex with Melania on air to boost his ratings. “Wouldn’t that be nice?” Trump replied. Someone in Stern’s studio then launched into a crude impression of Melania having sex with Trump. “Please, Donald, don’t put it there!” he cried in a fake accent as Stern’s crew—and Trump—collapsed into laughter. The New York Post also reported that, during the interview, Trump told Stern he frequently “mentally” felt up Melania in public.

But the sex- and harassment-filled radio appearance didn’t exactly strike Trump as a bad move. “Is this your average interview, Robin, for a presidential candidate?” he proudly asked Stern’s co-host before weighing on the role of hotness in the Monica Lewinsky scandal. “There are those that say that if President Clinton was caught with a supermodel, he would have been everyone’s hero. Now, of course, I would never say a thing like that, but there are those that say that.”

“President Trump will be a reality,” Stern said as Trump signed off. “Thank you, Mr. President.”

Verney, the Reform Party chairman, was nonplussed by the sexually charged Stern interview. “The very first principle of the Reform Party is to set the highest ethical standards for the White House and Congress,” he told the Post, “not the most base, crass attempt to appeal to the lowest common denominator. Whatever their private life is, it should be exactly that—their private life.”