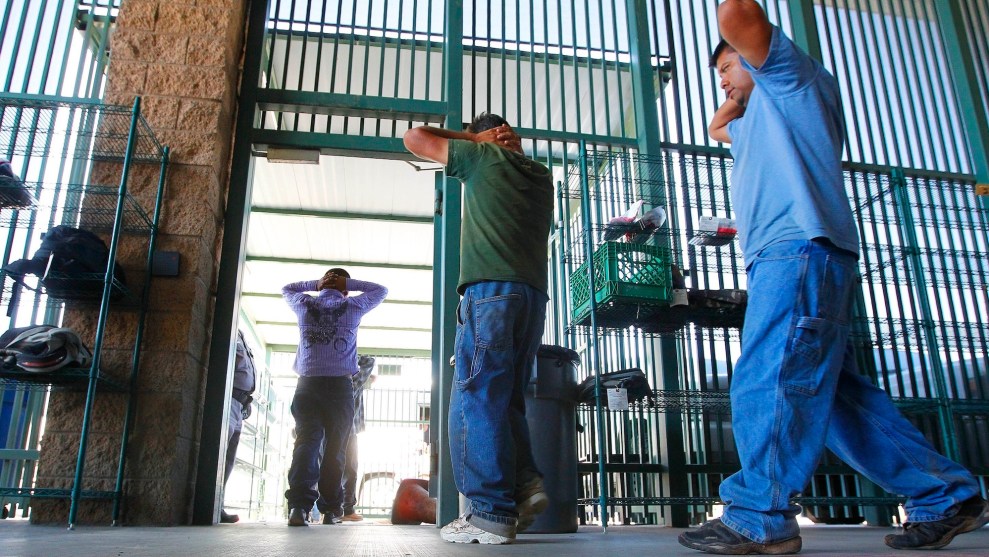 Governor Jerry Brown vetoed a bill on Wednesday that would have prevented local governments from contracting with for-profit companies to detain immigrants. Seventy percent of the state’s immigrant detainees are held in for-profit facilities, according to data from Immigration and Customs Enforcement (ICE).

In his veto message, Brown said that he was “troubled” by recent reports revealing poor conditions in some private detention facilities. But he explained his veto by deferring to the Department of Homeland Security, which manages ICE and is currently examining its use of for-profit companies.

DHS’s choice to review its use of private detention centers came less than two weeks after the Department of Justice announced that it was ending its use of private prisons. A report from DHS’s advisory council is expected back by November 30.  “These actions indicate that a more permanent solution to this issue may be at hand,” Brown wrote. “I urge the federal authorities to act swiftly.”

The director of ICE said that eliminating for-profit centers would “pretty much turn our system upside down.”

But last Thursday, in a statement interpreted as a bad sign for those pushing to eliminate these for-profit centers, ICE director Sarah Saldaña told the House Judiciary Committee that eliminating private detention centers would “pretty much turn our system upside down.” Around 73 percent of the immigration detainees are held in facilities currently operated by for-profit companies. If the for-profit companies were no longer housing detainees, ICE would have to build more detention centers and hire staff in order to meet its ongoing legal requirement to maintain at least 34,000 immigration detention beds.

The California bill, which passed 25-13 in the state Senate and 51-28 in the House last month, would have eventually closed three of California’s four private immigration detention centers. It also would have required all of California’s immigration detention facilities, public and private, to meet the most recent federal standards for things like medical care, and would have extended extra protections to LGBT inmates, prohibiting them from being forced into segregated housing on the basis of their gender identity or sexual orientation.

Closing the three private detention centers would have affected approximately 40,000 immigrants held there every year, according to Christina Fialho, executive director at Community Initiatives for Visiting Immigrants in Confinement (CIVIC), a nonprofit that helped draft the California bill. With the three facilities closed, ICE would have been forced to send detainees elsewhere—either to publicly run local jails, out-of-state detention centers, other private facilities, or possibly community-based monitoring systems.

Among the facilities that the bill would have closed is Adelanto, a 1,960-bed center run by the for-profit corrections company GEO Group and the subject of a 2015 report from CIVIC. The report pointed to allegations of inhumane conditions and poor access to legal representation. At least one immigrant has died at Adelanto due to “egregious errors” by the center’s medical staff, who did not give him proper medical examinations or help him access timely off-site treatment, according to a letter signed by 29 members of Congress who sought an ICE investigation into health and safety concerns at the facility last summer.

Last November, a group of at least 400 detainees at Adelanto launched a hunger strike to protest what they saw as inhumane conditions. They asked for longer visiting hours with their families, better medical and dental care, cleaner and better-prepared food, daily access to an outdoor yard, and an ICE employee to handle their grievances rather than a GEO staff member. “We are detainees and not prisoners,” they wrote in a letter obtained by Think Progress. GEO Group typically makes $111.92 a day in revenue for each immigrant it incarcerates in Adelanto, according to ICE.

Here’s our coverage of the latest developments: