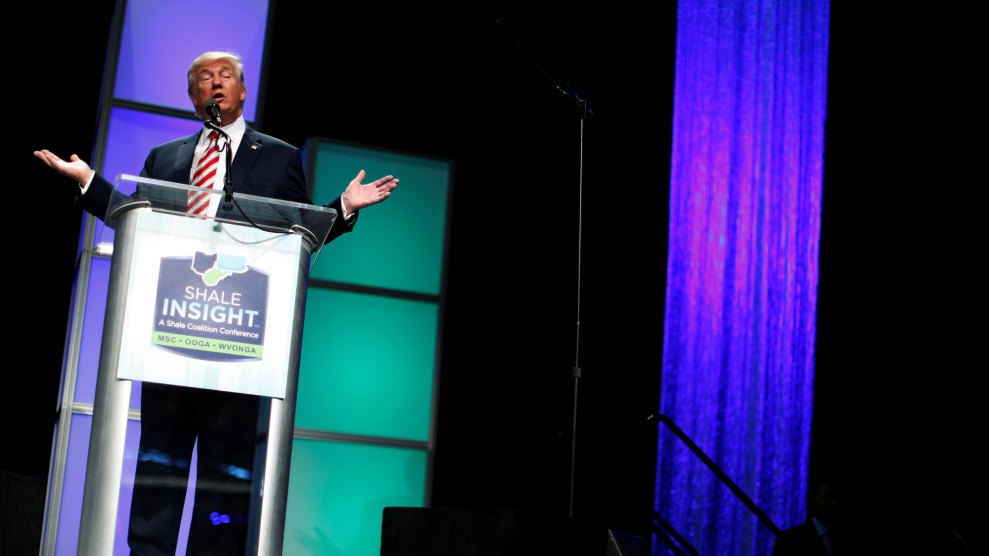 Of all the myths of Donald Trump’s presidential campaign, few are as enduring as his claim to have opposed the war in Iraq from its inception. Trump used his alleged opposition to the invasion as a bludgeon in the Republican primary, tearing down challengers such as Jeb Bush and positioning himself as a prescient foreign policy thinker. Since winning the nomination, he’s repeatedly attacked Hillary Clinton for supporting the war. And he again insisted that he opposed the invasion during Monday’s presidential debate.

The problem is that there’s no evidence that Trump voiced his opposition to the war like he says he did; the only statements he gave prior to the invasion were supportive of it. And his own explanations of his position have in turn opened up even more contradictions in his record.

Here’s a quick guide to Trump’s various position on the war:

Trump’s evolution on Iraq tracks closely with that of many Americans. As the Washington Post has pointed out, his public criticism of the invasion coincided with the broader shift in American public opinion on the war’s conduct. But as he mounted his bid for the presidency, Trump began to tell a very different story—that of a lone truth-teller. Last September he said that his debate audience could find “25 different stories” on his opposition to the invasion of Iraq, and he introduced a new bit of drama that had not been disclosed previously: Trump’s vocal criticism of the march to war in the press had so unnerved President George W. Bush that he sent a delegation to Trump Tower to calm him down.

“We should have never gone into Iraq,” he told Fox News in 2015. “I’ve said it loud and clear. I was visited by people from the White House asking me to sort of could I be silenced because I seem to get a disproportionate amount of publicity. I mean I was very strong: ‘You’re going to destabilize the Middle East.'”

At a Republican debate in February, he reiterated his position, bragging that his outspoken statements of dissent were particularly noteworthy because he was only a private citizen. “I’m the only one on this stage that said, ‘Do not go into Iraq, do not attack Iraq,'” Trump said. “Nobody else on this stage said that. And I said it loud and strong. And I was in the private sector. I wasn’t a politician, fortunately. But I said it, and I said it loud and clear, ‘You’ll destabilize the Middle East.’ That’s exactly what happened.”

But when he was confronted with his 2002 comments on Howard Stern (Stern: “Are you for invading Iraq?” Trump: “Yeah, I guess”) later that month, Trump seemed at a loss. “I really don’t even know what I mean because that was a long time ago and who knows what was in my head,” he told Chuck Todd.

Trump continued to talk up his Iraq opposition on the stump, though, and by the time he was confronted with his 2002 comments again in May, by Fox News’ Bret Baier, he had a (slightly) more fluid response. “I’m talking to Howard Stern, weeks before, the first time anybody had ever asked,” he said. “And don’t forget, I was a civilian. The first time anyone ever asked me about the war, about should we go in, because it was a question, are we going in? And I said very weakly, ‘Well, blah, blah, blah, yes, I guess.'”

By June, Trump had locked up the nomination, but he still hadn’t offered up any of the supposed two-dozen articles that he claimed would vindicate his claim of having opposed the war from the start. He told CNN’s Jake Tapper that there were plenty of articles attesting to his criticism from 2004 and on (true) and said of the infamous Stern interview, “even that, it wasn’t like, ‘oh yeah, we should go in.’ It was a very, like, ‘yeah, maybe.'”

Trump has still never produced an article or an interview from before the invasion that back up his claims of “loud and clear” criticism. And in recent months, surrogates have excused the absence of evidence by noting that Trump was just a simple businessman—so of course no one asked him. But in September, Trump threw yet another explanation into the mix. He did speak out—he just did it in private phone conversations with Sean Hannity.

“I spoke to other people and if you look also…speak to Sean Hannity, who’s a terrific guy by the way, speak to him, and he and I used to have arguments about the Iraq War,” he said to Fox News’ Howard Kurtz. “As, you know, Sean wanted—he believed in the Iraq War and, you know, that’s—that’s what his belief was. We used to have arguments about it, big arguments, and you could speak to Sean and that was before the war started.”

In an ideal world, at least one major-party candidate would have opposed the greatest American foreign policy disaster of the last half century. But as someone once said, you go to war with the army you have.